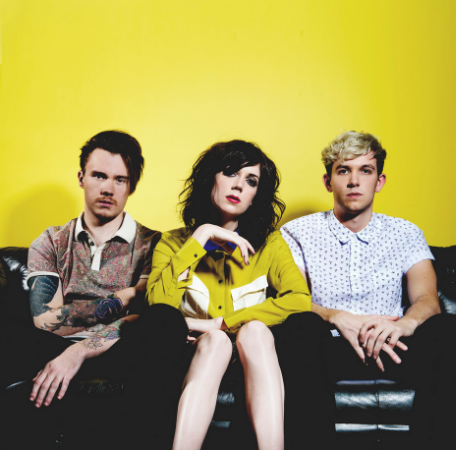 With acts like Hurts, Bastille and La Roux in recent years making it cool again for people to wear high tops, sport flat top haircuts and embrace big choruses it seems only natural then that lead singer Sarah McIntosh and her quiffed chaperones (her brother Hamish McIntosh – bass, and friend George Hinton – drums) have also gone down this road on their debut album ‘Prism’ – to be released this summer.

Tonight they play to a packed house from the off. The youthful crowd has clearly come for headliners Imagine Dragons and seem somewhat distant throughout but the band receives positive enough applause between tracks that would suggest that although not totally winning over the majority they have at least picked up a few new fans.

Blending 80s nostalgia with a new twist their sound is mix of Human League catchiness, a hint of amphetamine fuelled beats, with pouting punk morals. Lyrics drip with imagery of sex, love and fantasy – ‘a prism of the heart’ as they put it.

The demure Miss McIntosh angularly bestrides the stage with the kind of burlesque twitches and saunters that would make Karen O sit up and take notice and all the while she is driven along by the tight rhythm section and some pre-recorded tracks.

Not interacting too much between songs they power through the first few numbers in no time at all and soon reach former single “5-HT” (now here’s the science bit, kids…. 5-HT is a biological reference to the serotonin receptors in the brain commonly associated with aggression, addiction and heart rate). It is here that you see the band spluttering into life. An upbeat tune, it asks for club dance floor acceptance with its drum and bass-referencing rhythms and seems to encapsulate their sound: beautifully blending the epic-ness of their 80s idols, while maintaining a sultry cool cold exterior.

Slowing off into songs like “Sting” and current single “Lovers” the set drifts on until they boil back up with maybe their most 80s sounding song “Skeleton”. Indeed it was this song that marked the passage from Sarah’s early solo EPs (‘Warriors’ and ‘Your Body Is A Machine’) to the fully-fleshed sound of the band you see today.

And then from the searing spotlight they are off into the darkness. Through the prism and beyond.

For more on the band visit: www.thegoodnatured.co.uk