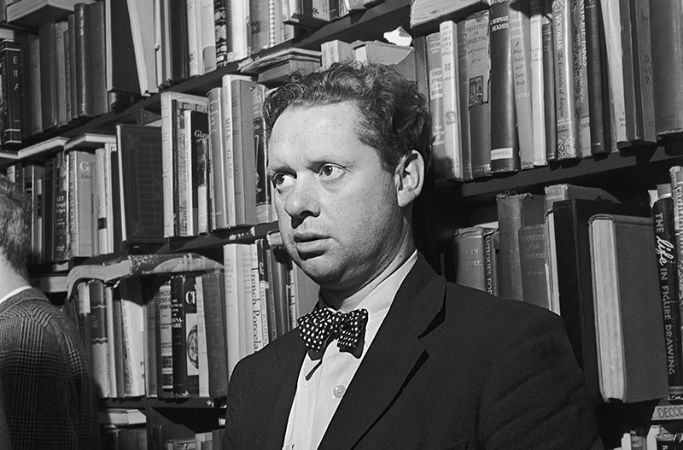 With the anniversary of his birth sharing a 2014 centenary with the outbreak of World War One, Dylan Thomas tributes were, of course, always going to be rather lost within the importance of such commemorations. Thomas, though, is viewed by some as one of the 20th century’s most influential poets and a writer who brimmed with mellifluous and innovative lyricism. His was a greatness often forgotten amidst the debauched, wine-fuelled infidelities of a roistering public image and his succumbing to drink at just 39 years of age. ‘Dylan Thomas: Return Journey,’ however, is a remarkably authentic reminder of his brilliance and Bob Kingdom provides a spellbindingly accurate portrayal of Thomas’ American lecture tours of the early 1950s.

Striding on to the minimalist stage clad in a grey suit, white shirt, polka dot bowtie and plimsolls, Kingdom uncannily captures Thomas’ appearance as that of an “excommunicated cherub.” Expertly replicating the welsh-inflected poshness of Thomas’ sonorous delivery, the potency of the illusion is thus complete. Kingdom begins the 85 minute monologue with a comic preamble; he playfully chides TS Eliot in observing that when spelt backwards his name very nearly spells “toilet” and, after conceding that “there is no nice way of describing vomit,” we are offered the suggestion of “to exhale with enthusiasm.”

With his mastery over a script full of whimsy, absurd wit and flowing linguistic density, Kingdom wonderfully embodies the essence of Thomas as he oscillates between short observations, lengthy anecdotes and readings of Thomas’ poetry. The show sways with unlikely subtlety from comic farce to poetic sensitivity as when the surrealist one-liner “if every hermaphrodite was a schizophrenic, which part would you chose?” gives way to a reading of ‘Poem in October.’

Lifted from Thomas’ book ‘The Outing,’ Kingdom’s abilities as a raconteur are most apparent when he reels off a long anecdote about a young Thomas joining his uncle and a host of eccentrics on a charabanc trip to Porthcawl. We learn of Bob ‘The Fiddle,’ the treasurer who cannot quite be trusted with the funds, Cadwallader who never needs a watch to know precisely how long it is until the pub opens and a thirsty Mr Weasley whose desire for drinks leads to a constant need to disembark from the vehicle: “Stop the bus, I’m dying of breathe!” Within this amusing tale is a real evocation of Thomas’ reputed élan as public house storyteller and reputation as a highly entertaining drunk.

Some of Thomas’ most well known poems make an appearance with ‘And Death Shall Have No Dominion’ closing the first half and perhaps his most famous verse ‘Do Not Go Gentle into That Good Night,’ a plea to his dying father to “Rage, rage against the dying of the light,” is recited later. While all the poems are delivered with impressive fluidity and expressiveness by Kingdom, it is difficult, particularly for those unfamiliar with Thomas’ poetry, to fully appreciate the lexical dexterities of his verse; by no means the most accessible of poets, Thomas produced work that has to be sat with and absorbed. Nonetheless, the musicality and lyrical nature of the imagery, when combined with Kingdom’s convincing oration, upholds an entertaining charm.

‘Dylan Thomas: Return Journey’ is a success as much, if not more, for Kingdom’s wonderful recapturing of Thomas’ spirit than the strength of an amusing, verbally dextrous script taken from his writings and public readings. When Kingdom momentarily breaks from the monologue upon hearing a clang from the audience and quips “I’ll be with you in a minute” before resuming without a missed beat it is evidence that, rather than an actor rigorously reciting a script, Kingdom is caught up in the performance and effortlessly personifying his subject. With the foreboding reference to Thomas’ death from “American hospitality” and a haunting reading of ‘Fern Hill,’ the dying of the stage lights induce a rapturous applause so deserved for such a mesmerising solo performance.