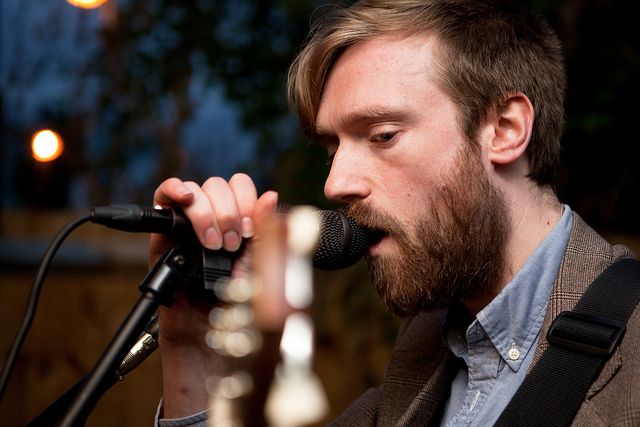 David Thomas Broughton’s gig at the Grain Barge couldn’t have come at a better time, showcasing as he is ‘Sliding the Same Way’, the album he released on Monday. Produced in collaboration with Juice Vocal Ensemble, who perform alongside Broughton tonight, the album has already garnered praise for featuring “the loveliest voice on record this year” and for “staying fluid, strange and wholly distinctive throughout”.

Loosely defined as nestling within that broadest of categories, Folk, Broughton’s music is indeed incredibly distinctive. (Frustratingly from a journalistic point of view, it is quite unlike anything else, and comparisons with other artists are hard to draw upon). His voice tends to divide opinion, but we at The Fix are big fans of his sombre West Yorkshire slant, full of longing.

Much of the pleasure of tonight’s gig comes from the understated theatricality of the set (and no, we’re not talking Alice Cooper here). Juice play the part of eccentric groupies, forever getting tangled in their microphone cables, bumping into each other and fiddling with their equipment. At one point the three female vocalists wander around the barge singing their separate parts, eventually picking up tealights to pass on to members of the audience.

The performance is exactly that: a thoroughly tuned, meticulous merging of material without pause. A recurring theme is that, as the songs descent into chaos, all clicks and whirs and beeps and whistles, and the feedback reaches a cacophony and Juice become completely entangled in their equipment, all tracks cut suddenly so that the only noise is Broughton’s elegant guitar introducing the next song. Broughton uses looping, but in an understated, subtle way, the result of which is beautiful.

The high point of the night comes as Broughton enters the bar to ask for a pint of water, before ‘nervously’ making his way through the crowd to stand next to The Fix. Backing music is provided by his own previously looped guitar and Juice percussively tapping mugs with teaspoons. After anxiously, restlessly fumbling, he all of a sudden cries out the lines of “Nature”.

“I’m going to look through end of this telescope, such is the nature of a fool;

I’m going to charge through this china shop, such is the nature of a bull;

I’m going to broaden my horizons, such is the nature of aims;

But I’m going lose myself with you, going against my idea of change.”

With a thrust of his arm he knocks The Fix’s quiff, loses his lines and apologises, but the moment is not lost.

As Broughton closes the set, he stares fixedly into the crowd for what seems like an eternity. A poignant way to end what is, without any hyperbole, one of the finest gigs The Fix has ever witnessed.

David Thomas Broughton continues to tour the UK until the end of September. Do not miss him.