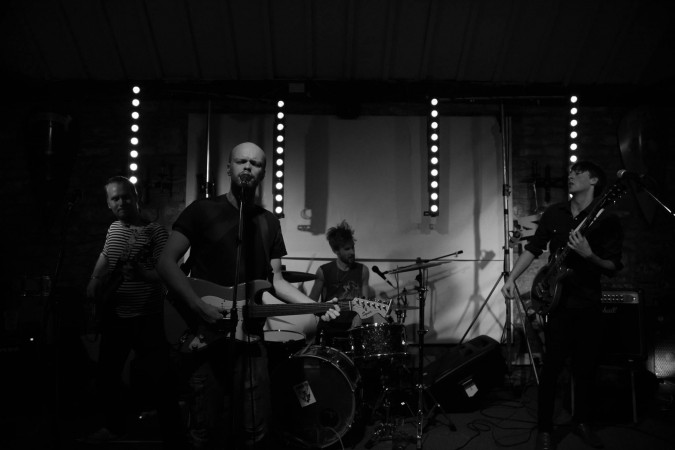 Glastonbury rock quartet Electric Fox took over The King Arthur on Friday 22nd January to officially launch their debut single, “Run Around,” in a gig that felt like the official signal of intent for four re-focussed musicians that have won admiration for their work in previous guises.

Together now for just over a year, frontman Joseph Shephard is the only new entity for those familiar with the Glastonbury music scene with his three bandmates being closely associated with Hot Sister, a popular bluesy reggae band who consistently drew plaudits and took up residency for a short while in this very venue. However, no comparisons can be drawn with their relatively new rock-based project that to our ears has a contrast of genres feeding into their music with tracks showing an alternation between indie, punk and grunge in terms of their overall feel. The new single has leanings towards the former.

Playing to a good crowd, Electric Fox had an excellent stage presence with the energetic frontman Shephard being complemented beautifully by Rohan Black, former frontman of Hot Sister and a strong vocalist himself, who proved to be a true luxury with cooly delivered backing vocals. In a slightly unusual set up, the highly skilled drummer Veda Geib was side-stage rather than the traditional centre-point and drove the band on with a fine performance as his brother, bassist Shambo, cut a composed, cool figure as the aforementioned Shephard and Black were in their element rocking out.

The night may have all been about the single, “Run Around,” but the crowd in the packed in and thus intimate feeling Arthur, which has the feel of a mini Fleece and Firkin, would be treated to a 45 minute set for which the only complaint would be that it was too short. As alluded to previously, there seems to be a fusion of musical genres feeding into the rockers’ track list and Electric Fox were able to change the pace throughout as the punters danced and the 4-piece basked in the changing imagery of a projector that offered itself to a colourful stage show. For us, the upbeat, frenetic tracks really stood in an interesting set. “Rebel Song” and “Five a Day” particularly struck a chord.

All in all it was a triumphant night for Electric Fox who left the stage with screams for more even after a brief encore. Having spoken to Veda Geib at some length on previous occasions, we get the feeling that there’s a sense of renewed confidence and excitement about the new direction that he and his former Hot Sister bandmates are heading in with the birth of Electric Fox. They’ve been honing their craft with carefully selected gigs in and around Somerset and Bristol and limiting the material available to online audiences, but with the release of “Run Around” it would be safe to assume that they’ll be ready to take on the south west music scene with more vigour as 2016 rolls on.