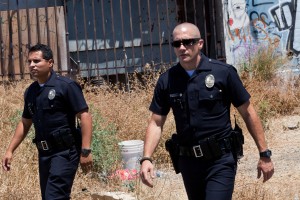 End Of Watch (Cert 15) Director: David Ayer Out on DVD, Blu-ray: March 18th In their mission to abide by their oath to serve and protect, Officer Brian Taylor (Jake Gyllenhaal) and Officer Mike Zavala (Michael Peña) have formed a powerful brotherhood to ensure they both go home at the End Of Watch. The only guarantee for these officers is that there are no guarantees when patrolling the streets of South Central, Los Angeles. Between the blue lights, blaring sirens and adrenaline pumping action thrives an honest and often humorous banter between partners who spend most of their days in a police car awaiting the next call. The officers have formed a bond that allows them to function as a unit in the face of danger, knowing full well, at any moment, they could be called on to lay down their lives. The vivid action unfolds entirely through footage of handheld cameras shot from the point of view of police officers, gang members, surveillance cameras, dash cams, and citizens caught in the line of fire. This 360° perspective creates a riveting and immediate portrait of the city’s darkest, most violent streets and back alleys, and the brave men and women patrolling them. Writer/Director/Producer David Ayer (Training Day) was driven to get the story of Los Angeles cops “right,” and open a window into a rarely seen world of law enforcement for all its truth, grit and compassion.
Follow @Thefixmag
Recent Posts
We Like You…