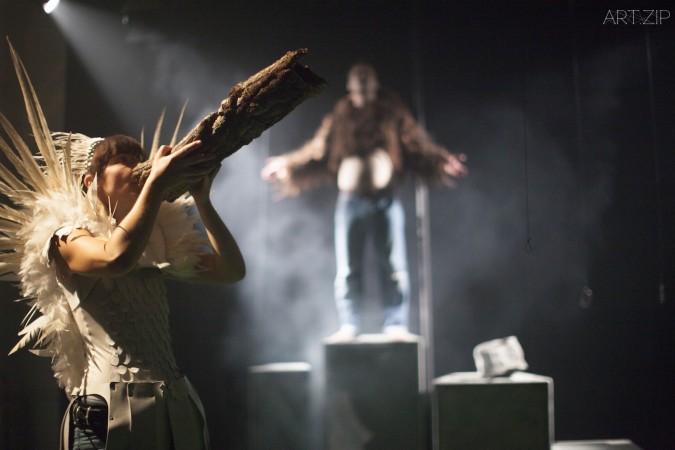 Starting where Shakespeare left off This Last Tempest ponders “what happens after the revolution, when a tyranny has been overthrown and those who held authority have been deposed.”

Pitching itself as a sequel of sorts to the bard’s last play we start with the final epilogue of The Tempest echoing out across the stage like a wartime radio in a deserted house, as smoke billows across the crowd creating an aesthetically authentic sea like fog.

As the despotic Prospero sails off into the distance we are abandoned on the enchanted isle with the sprite Ariel (Jessica Hoffman) and misunderstood Caliban (Richard Duffy) – plus Neil Johnson as the performance’s modern tudor musician armed with guitars, laptop and ruff.

Free from the yoke of their former oppressor all are understandably overjoyed – especially Caliban who spends a good 3 minutes bounding about in delight. But while now emancipated from the Milanese sorcerer shackles the question of what happens next is almost as confusing for the magical inhabitants of the island as his potential return – Who leads now? What world will they create? Can a harmony between order and fairness be found?

Seeing The Tempest through modern eyes it’s easy to see why many have read the plot as an exploration of colonialism (and could now be re-read in view of the exploitative elements of globalisation) and all the moral issues that raises. With this in mind Uninvited Guests story seems like the natural progression for the narrative.

As the action on stage takes us through the looking glass and into an imagined conclusion the very fact that the play takes place effectively back stage (with the audience on the side stage of the theatres main stage) provides a further metaphor for seeing behind the scenes.

An interesting storyline is not This Last Tempest’s only asset though. Monika Bereza’s costumes are fantastic (Ariel’s plumage is especially brilliant) and Tom Cotterill’s stage is stunning but it is Neil Johnson’s simply divine soundscape that steals the show. Combining both surround sound that immerses us in the action like we too are lost in the eye of the tempest itself he uses inventive props (such as what can only be described as an echo drenched gurgling water filled didgeridoo) to great effect.

When all these components are working in unison then we are treated to a truly 4D performance – as strobing lights and feathered silhouettes gyrate and glide around on trapeze wires as our lungs are filled with fog in stunning storm scenes – but sadly the company can’t quite keep up the momentum of these impressive moments and some parts do feel a little laboured.

Beautifully crafted This Last Tempest adventurously reaches some real heights that it finds it hard to maintain in what is a truly 4D experience.