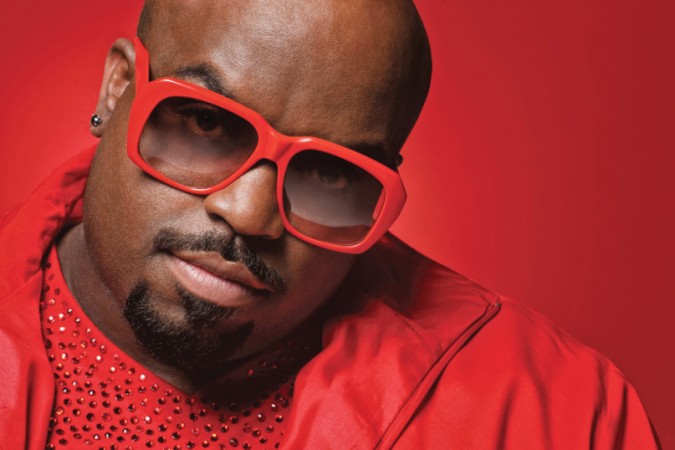 CeeLo Green – ‘Music To My Soul’

Possessed of myriad skills in his role as singer, songwriter, record producer, actor, businessman and part-time volunteer goat herder, there seems very little that Georgian polymath CeeLo Green can’t do. In fact, judging by the video to the satisfyingly catchy new single from fifth studio album Heart Blanche, he even has the power to transform the bleakness of a family funeral into the sort of joyous celebration that would make Notting Hill Carnival, by comparison, seem jaded and monochrome.

There are brass instruments, garish sartorial choices aplenty, colourful umbrellas, a pimp in a wheelchair and a midget dressed up as an NFL referee; CeeLo himself opts for a veil and hat combo that gives him the appearance of a goth bride crossed with a bedside lamp. However – and I’m someone who likes to jubilantly celebrate the death of a loved one as much as the next man – I would suggest that there’s absolutely no need for that tiny sod in the white dinner jacket to do a Michael Flatley all over the bloomin’ coffin.

It’s a little galling when a music video immediately begins with some ultra-vane twonk brushing his barnet in the mirror while staring into his own eyes with a sort of lovestruck awe usually reserved by a mother for a new born sprog. However, in the case of Adam Lambert’s braying on about a prolonged period of loneliness in his new single, such narcissism perhaps gives context to the end of relationship gloom – presumably the time consuming demands of Lambo’s grooming regime is the only reason why his neglected man-friends keep booting his preening arse into singledom.

Featuring a moody teen’s, pre-GCSE lyrical sentiments about loneliness (“And I don’t give a fuck if the sun comes up, yeah/It’s just another”) and a video containing four characters performing in Las Vegas while enduring aloneness in their personal lives, the whole thing feels a tad adolescent.

Elsewhere, Lambert gets away from the mirror for ten minutes to take his hair to the car wash where he hoses down his Dodge sports car while being very careful not to get water on his hair. Later he takes his hair to a nightclub where he performs, along with his hair, as a cabaret singer. He then ends up back in bed alone once again, apart from his hair. Thank Christ he’s got his hair.

To the backing of a Euro pop drum beat that we’ve all heard approximately 6,937 times before, ‘Shades of Grey’ offers up the only advice you’ll ever need to get over the break-up of any relationship: Simply meet up with the friend of yours who is most likely to venture out in public dressed as a frog and get drunk at a BBQ party full of buxom young fillies. It’s as easy as that. And if that doesn’t quite heal your heart, rent a puppy from the internet, dress it up as heroic wartime fighter pilot Biggles and chat up some more ladies at the local park with the same idiot friend now dressed as a mouse and armed with a couple of Super Soakers.

In future, our man Frank need not worry too much should he be on the receiving end of a romantic dumping. Quite clearly, if you’re the kind of cock-knocker who thinks it’s cool to dress your dog up in goggles (‘doggles’ as they’ve already been labelled by some arse cheek in marketing) and who’s best pals with a wacky A-level student who thinks it’s funny to dance around in a club while dressed as a rabbit, the next bit of ‘the old in and out’ is surely just around the corner.