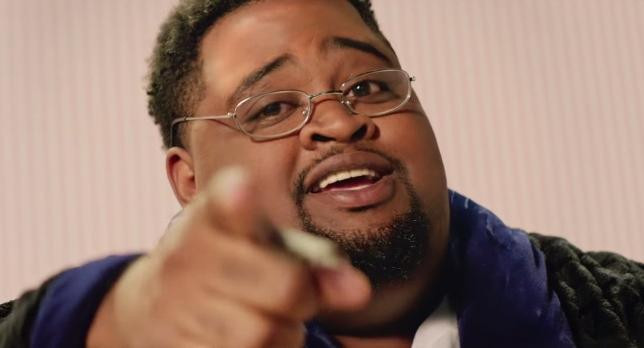 Whether it’s an old fella dive bombing into a pool in the film Cocoon, Sly Stallone fighting crime with his own mother in Stop! Or My Mom Will Shoot or Madonna taking a tumble off stage at the 2015 Brit Awards, it is always an unfailing source of comedy to see brittle boned oldies attempt actions usually reserved for the relatively young. Case in point is the video to ‘Ain’t Too Cool’ where, in a union even more bizarre than the real life friendship between jug-eared crisp peddler Gary Lineker and former snooker playing walrus Willie Thorne, LunchMoney is itching to hang out with his eccentric octogenarian bestie.

Uggh. That’s the first time I’ve ever used the word ‘bestie’ but considering the deluge of texting, selfies and emoticons on display (LunchMoney even finds some to indicate that he is in the middle of laying a massive turd) it’s very much in keeping with the milieu of the hip hop star and his coffin-dodging pals. Frankly, the old gal’s mastery of modern technology is impressive – my dear Grandma’s brain decided to cave in the very first time she laid eyes on Ceefax.

In his very first venture away from maudlin Mancunians Elbow, it’s probably not too much of a surprise that the title track from Garvey’s 2015 solo album ploughs similar terrains of downbeat emotional turmoil – a light-hearted cover of the William Shatner version of ‘Rocket Man’ with Alvin and the Chipmunk style vocals was never going to materialise was it? It’s an affective tumult that sees Double G (as I call him) singing “No more courting the squall” – such is the apparent wreckage of Garvey’s emotions, it is unclear whether or not the cracked singer is making plain his wish to no longer partake in romantic meals with sudden, violent gusts of wind.

A riveting, monochrome video exclusively features various angles of Garvey’s bearded face – a countenance that vaguely resembles Ricky Wilson. That is, if the Keiser Chiefs frontman had been subjected to 6 months of drinking Kestrel and sleeping next to wheelie bins on Tottenham Court Road. It’s all little bit dull. In fact, the lyric “I’m pondering trees” sounds, in a “watching paint dry” type vein, like an activity with rather more potential for enjoyment.

The first artist to be signed to tangerine troubadour Ed Sheeran’s new record label Gingerbread Man Records (a name perfectly encapsulating both Sheeran’s fire brick follicles and his penchant for biscuit based capery), 40 year old singer-songwriter Jamie Lawson emerged from the wilderness when he landed a UK number one album with his self-titled record in 2015. ‘Cold in Ohio’ is the third single to be taken from the album and it’s a song in which the earnest Devonian, like a one man musical meteorological office, keeps us abreast of the weather conditions in various locations around the world.

However, unlike those true bastions of the barometer (Messrs Fish, McCaskill, Kettley), Lawson is no legendary seer in the weather stakes. In telling us that it’s cold in Ohio, New York and, rather specifically, Vostock Station (well it’s bound to be cold, it’s in Antarctica innit?), he only seems capable of telling us it’s rather nippy in just a handful of arbitrary places. He then sings “But it’s warm here next to you” and the song is revealed to be the most touching ode to an electric 2 bar fire in recent memory.