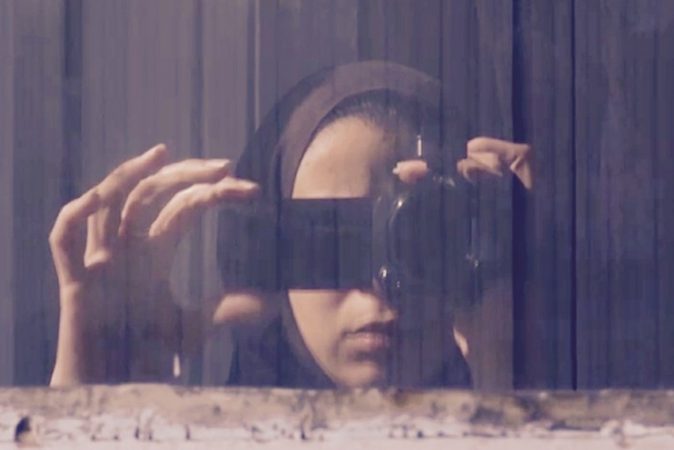 A collaboration between director Caroline Williams, Syrian artist/filmmaker Reem Karssli and teenagers from London’s Young Vic Taking Part project, Now Is the Time to Say Nothing attempts to humanise the everyday horrors of the Syrian war and tackle the conundrum of arousing real human empathy in the face of large scale tragedies beamed, via screens and monitors, directly into the comfort of our homes. Using powerful images, immersive soundscapes and elements of interactivity, this is an earnest and ambitious plea to derail the limits of human compassion.

The small audience, numbering no more than a dozen, is instructed to sit in armchairs dotted around the perimeter of the theatre space, put on headphones and individually watch an adjacent television screen. Being sat in the dark, staring ahead and facing away from everyone else in the room immediately evokes the perfunctory and impersonal way we consume television. The remaining 60 minute performance is an audio-visual entreaty to break us out of this automaton disposition and make us care – really care – about what is going on in Syria.

To set the scene, images of war planes, the sound of bombs and testimonies from those forcibly adjusting to their daily routine of survival combine with flashes of Channel 4 News and British parliament discussing a potential military response to the Assad Regime’s Sarin gas attack in 2013. Then the audience is addressed directly; the screen goes blank and our facial reflections occupy the same space as the suffering; we are told to imagine a personal relationship with a Syrian girl – would exchanging musical ideas and discovering that your hearts were captivated by the same song sharpen up our empathy for her and, by extension, all Syrians?

The theme of personalisation is further developed with footage of Karssli’s Skype conversations with the Young Vic teenagers; experiences are shared, bonds are formed and we meet Karssli’s infant relatives. There’s a powerful moment when the falling of snow in Syria coincides with a cessation in the fighting – this is later reconstructed as the audience are guided towards the centre of the room and synthetic snow tumbles from the ceiling.

This is during the first of the interactive segments – serving to cajole the strangers in the audience into accepting proximity – that are interspersed within the presentation of the film. Later, there’s an interesting attempt to evoke Karssli’s eventual fleeing as a refugee via a daunting journey across the sea into Europe; the audience are invited to sit on the floor and, with audio instructions drawing the group in closer together, it creates a mirroring sense of claustrophobic awkwardness that is surprisingly effective.

The seemingly inexorable reaction of hopeless detachment in the face of global tragedy is a problem that needs confronting. Psychologist Paul Slovic has spoken of a “psychic numbing” with our empathy levels and willingness to help reliably decreasing as the number of victims in a tragedy increases. In the sense that this imaginative and admirably considered piece shines a light on – and offers the smallest glimpses of a potential solution to – this unfortunate bug in the software of human compassion, it is a noble and valuable work.