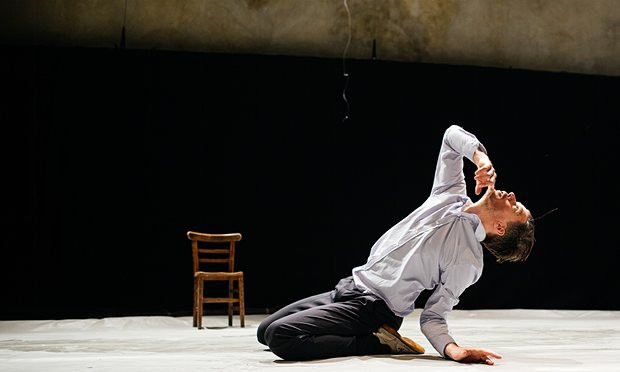 The prospect of re-enacting 17th century poet John Milton’s 10,000 line epic Paradise Lost via the medium of 75 minutes of dance based theatre involving a sole actor taking up the role of God, Lucifer and Adam and Eve, might well seem to some a challenging, if not conceited, one. This is just what happens in Lost Dog’s imaginative one man show as writer/performer Ben Duke ploughs the ecclesiastical terrain of some of Christian theology’s central stories with a curious but gratifying blend of comic absurdity, interpretive movement and musical grandeur.

Duke’s consciously shambling and self-effacing humour is immediately apparent as his preamble takes in the observation of the venue’s pliable functionality as both a place to “worship God and practice flying trapeze”. This is further suggested as, with comic awkwardness, he reveals that he has taken a few liberties with Milton’s work (he’s relieved that not many of the audience are familiar with the poem) and is subsequently all fingers and thumbs as he fumbles through his own copy of the text.

What follows is a sprint through some of the key moments in biblical mythology – God’s arrival on Earth, the battle between the angel armies in Heaven, the creation of man and Adam and Eve’s expulsion from the Garden of Eden – that strikes an effective balance between the amusingly absurd and the dramatically triumphant. We’re treated to brilliantly silly moments as Duke recreates God’s arrival on Earth by descending from a rope to the sound of ‘Also Sprach Zarathustra’ (the theme from 2001: A Space Odyssey) while a wrathful plague sent from above at the culmination of the War in Heaven is represented by an underwhelming scattering of chick peas.

In dealing with the weight of Christian assuredness on the origins of the universe, Duke’s satirical bent is very welcome and there’s an enjoyable sarcasm in his promise to answer the big questions “as only dance can”. The dance and musical sequences, however, do deliver something dramatic and emotive and provide an interesting counterpoint to the comedy; God’s creation of all life is expressed with Duke traversing his body and crashing with gyrations of passion, something poignant is captured as man’s loss of innocence intertwines with the echoing guitar licks of Janis Joplin’s ‘Summertime’ and ‘Battle Hymm of the Republic’, with Duke twisting and circling around a chair in the middle of the stage, provides an enchanting epilogue.

An entertaining show with perfectly pitched musical choices that, while satirising elements of Christian mythology, somehow also manages to capture an uplifting sense of its grandiosity.

Mayfest continues until 22nd May – For more information visit: http://mayfestbristol.co.uk/