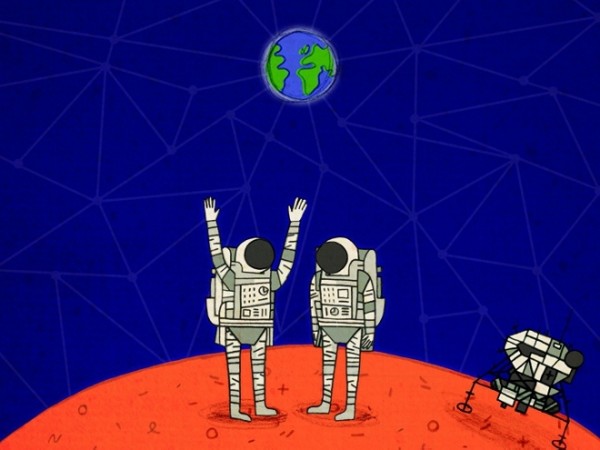 It’s hard to imagine a Bristolian in space.

Yes, we know Darth Vader was from Southmead, but in reality the idea of a fellow resident of Bris-vegas actually breaking these earthly bonds on a pioneering mission into deep space seems almost unreal.

Imagine just for a moment if Neil Armstrong’s first words to ground control back in Houston had been “alright me babber”, the moment would have surely lacked much of it’s gravitas. But this is the premise for Òran Mor and Traverse Theatres new play.

Whilst initially this seems laughable, maybe it is we who have lost sight of the makeup of true pioneers of exploration. It has not necessarily been the brightest and best making the first steps into uncharted waters.

The first Europeans to reach the Americas, for example, were predominantly uneducated peasants, lured into the unknown by tales of riches, with nothing to their names, and nothing to lose.

When seen in this light the prospect of affable, if not overly qualified, would-be Bristol-nauts Neil (Darren Seed) and Dawn (Rosie Mason) doesn’t seem quite so far fetched.

Yes, they probably couldn’t tell you the difference between a solar panel and the solar system but as they say “ignorance is bliss”.

This blissful ignorance seems to extend to their personal lives however, as a darker side to the narrative appears as the real reasons for their attempting to leave the planet are laid bare and this is where Adam Peck’s story really works best.

What makes us run into the dark when we are most tormented? Why does it feel that ‘starting over’ away from our pasts can in someway cover over our mistakes? These and many other deep questions are explored over the next 50 minutes.

The performances by Darren Seed (Neil) and Rosie Mason (Dawn) are both strong and provide a nice blend of comedy and drama, in just the right measures.

An interesting and light hearted story that gives us hope that (maybe) one-day Bristol will be in space. That would be gurt-lush