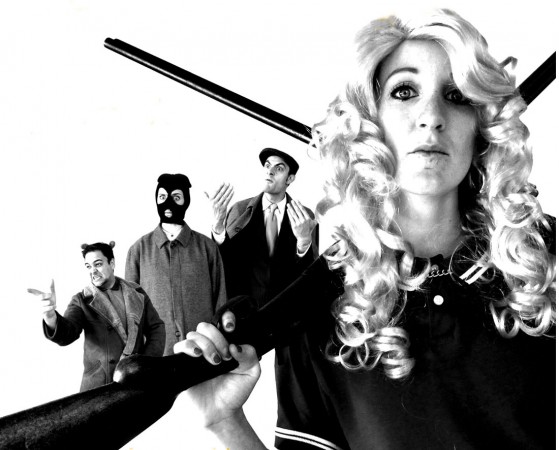 While the paint may still be drying on the extremely impressive walls of the brand spanking new Wardrobe Theatre, on stage the results are just as impressive as they ever were back above the White Hart.

Having relocated to Old Market in collaboration with the team behind The Canteen and No1 Harbourside (not to mention having had to raise £70,000 to fund the project), the new space at The Old Market Assembly opens with even greater expectations than ever before.

What better way though to open the new premises than with their now trademark alternative, darkly comic, adult-only Christmas production – their now standard antidote to the sickly sweet, sanitized fare on offer everywhere else.

For their fifth, and perhaps most important (thus far), alternative Christmas show the team have chosen a farcical assimilation of the classic porridge-thieving fairy tale with Guy Ritchie’s cult 1998 cockney caper.

From the off the performance is dripping with quotes, sly winks and references to Ritchie’s most recognizable film, with all the cockney posturing & stylistic touches (freeze frames, with that distinct gravely voice describing the nuances of the charather trapped in it’s gaze) of the original augmented by mockney mockery and downright absurdity – somewhere I’m sure Danny Dyer is scratching his head over this one.

Whilst Ritchie’s film was by no means a serious drama, the ridiculousness is ratcheted all the way up to 11 here, as over-the-top caricatures push the action all the way through the ‘lads’ magazine machismo and through into the panto realm.

The show stars some familiar faces from previous Christmas shows (including Harry Humberstone and Andrew Kingston from last year’s Muppits Die Hard, and Emma Keaveney-Roys from 2013’s Se7en Dwarfs), with the excellent Adam Fuller directing. The other actress tonight Lotte Allan may also be familiar to Bristol theatregoers from her sterling performance earlier this year as part of Fellswoops excellent Current Location.

Each performer is assigned several roles – Lotte Allan (as Barry/Rupee Bear/Morag/Sting), Harry Humberstone (as Harry/Poo Bear), Emma Keaveney-Roys (Goldilock/Sally/Torag) & Andrew Kingston (Vinny/Paddy Bear) – and it really is a marvel to see them all at work, morphing as they do from ‘cockney geezers’ one minute to whirling demonic Scottish Valkyries the next. Director Adam Fuller does a great job of mixing up the cast so frequently, and so imaginatively, that by the end it is actually something of surprise when only 4 actors come out for their well-deserved ovation.

As far as the comedy goes, despite some lulls in the first half, this really is a side splitting affair with special praise reserved for the depictions of psychotic gang overlord Harry (Harry Humberstone) – somewhere between the ostentatiousness of Ron Atkinson and the expletive laden East End abruptness of Ray Winstone – & his tireless workhorse ‘enforcer’ Barry (Lotte Allan), whose interactions are brilliantly timed and perfectly balanced.

Andrew Kingston’s twinkle toed Vinny is as agitated as a man desperate for the toilet and also excels, despite one laughing fit. If anything the relaxed and almost shambolic nature of the show only adds to it’s free flowing excellence.

The location may be different but this is still the same old Wardrobe Theatre – another year, another triumph.