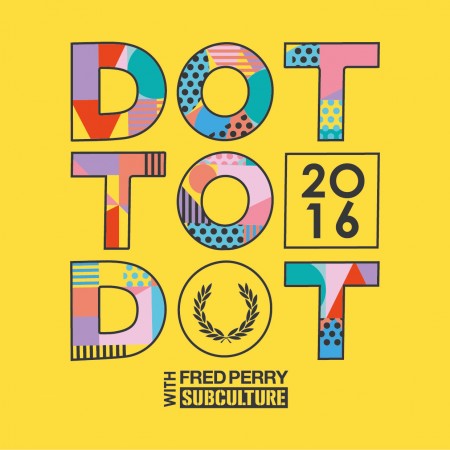 Though it’s not quite the glorious, almost unseasonably hot bank holiday sunshine that resided over last year’s tenth anniversary event, it’s nonetheless a lovely spring day which greets festival goers queuing up early at the Thekla wristband exchange. Big Jeff is spotted at the front of the queue – though a quick double take results from an apparently recent decision to shear off a large quantity of his colossal blonde mane – and a trio of musicians opposite provide the soundtrack to our waiting patiently for the clock to tick around to midday. What I initially interpret as some opportunistic busking, turns out to be local trio Souer who are cleverly marketing their 2.30pm performance at The Small Horse by showcasing stripped back acoustic versions of their grunge-laden pop tunes.

Wristbands affixed to wrists, it’s time to start pondering on how to begin tackling the expanding beast that this festival has become. With nearly 160 acts playing on 20 stages across 15 venues one has to have been engulfed in a hermit like existence of musical research or else be at the mercy of varying degrees of instinct driven fortune. Even if generally resigned to a play-it-by-ear ethos, Cousin Kula’s performance at The Louisiana’s downstairs bar is the only 12-12.30pm slot of the festival and, thus, the first decision has been made. 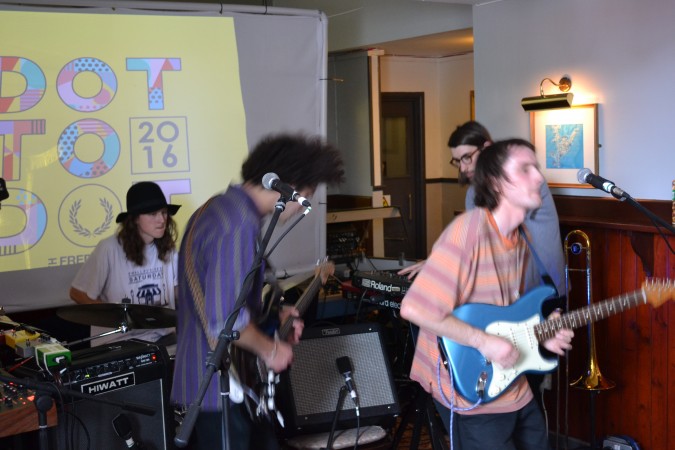 However, the nonsensical scheduling of a slot when even the earliest arrivals are still collecting wristbands means that it’s an achievement merely to catch half of the festival’s opening set. The tiny stage is packed with instruments, cables and amplifiers on chairs as jazzy brass, psychedelic organs, a funky rhythm section and some soulful lead vocals create an enjoyable eclectic blend. Still less than a year old, the Bristol band’s relative infancy is betrayed in their delivering of as yet untitled songs but belied in their energetically tight musicianship. There’s time for upcoming debut single ‘Hesitation’ before Dot To Dot’s unforgiving schedule dictates that the group need to abandon a planned final song.

It’s another Bristol based act that follows in the form of She Makes War, the moniker of multi-instrumentalist and visual artist Laura Kidd. Last year’s festival saw Kidd performing solo but a backing band now affords her sound an extra dimension – particularly in the case of the wah-wah soaked soundscapes and doomy riffing of her guitarist. However, the band does depart for ‘Delete’ – an interesting venture into avant-garde acapella – with Kidd using a second microphone to create vocal loops and her walking through the audience with a megaphone. Though there’s a hint of the floaty pop of Warpaint, She Makes War is at its best, particularly in full band mode, with angst-ridden battle cries such as ‘Direction of Travel’. 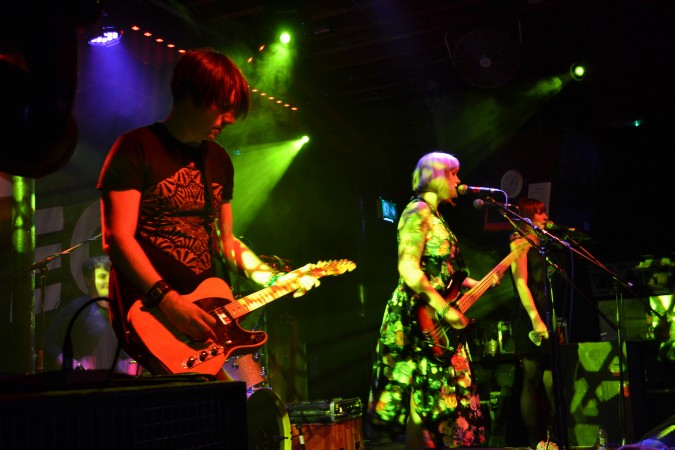 One definite plan goes awry – ultimately to be expected at such a festival – when a punctual 2.30pm arrival back at The Louisiana isn’t early enough for the oversubscribed appearance of Ben Caplan and The Casual Smokers. A contingency plan leads to the upper deck of Thekla and the dreamy indie pop of Eera, a vehicle for Norwegian singer-songwriter Anna Lena Bruland. ‘Survived’ is guitar led indie pop with echoing keyboards and the first evidence of a penchant for trippy vocal delay while the tuneful ‘White Water’ displays some decent song-writing chops. Bruland comments on the stifling humidity of the upper deck, displays a pleasing disregard for sartorial matters in her wearing of T-shirt and baggy joggers and executes an impressive falsetto when finishing up with the lyrically bleak (“there are so many ways to die”) but tuneful ‘Undressed.’ 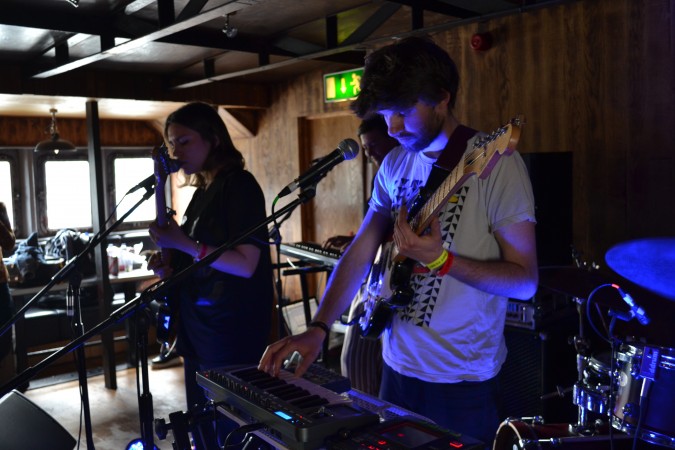 How does one make a performance at the dark, cavernous former police station of The Island feel like an explosive arena gig? Well, you need a front lady like Anastasia Walker of Sheffield rock n roll group Bang Bang Romeo. Having missed the huge, fiery bellow of Ben Caplan earlier, Walker more than compensates and possibly surpasses Caplan as the largest voice of the festival. It also helps that she is a natural performer – her charisma and playful command of the audience would make Freddie Mercury nod in approval. Sounding like Stevie Nicks era Fleetwood Mac with a more ferocious edge, the band deliver powerhouse choruses and robust musicianship anchored by the size of Walker’s voice and personality. Walker ushers the audience forwards for the emotive ‘Chemical’ and the bass player spills into the audience with set closer ‘Invitation.’ 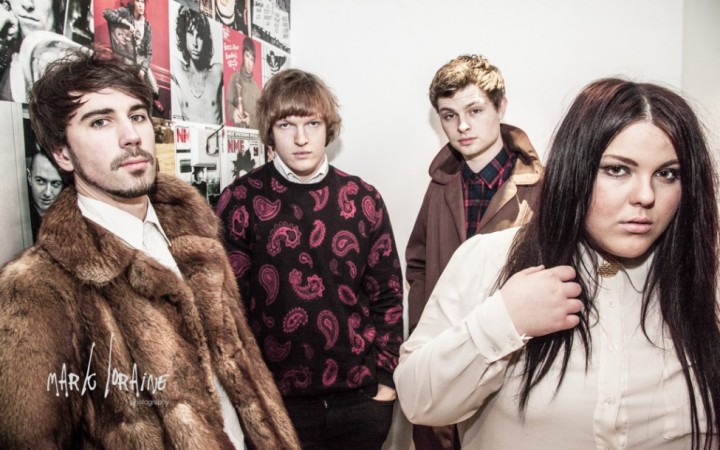 The performance from Mirror Furies at The Small Horse is a rather more low-key affair as the four-piece take us through some pensive indie folk tunes. A formula of some nicely crisp acoustic fingerpicking, foot percussion and subtle touches of electric guitar provide the backing for the heavy lyricism and feminine vocals. After ‘Born Screaming’ – a song about “losing someone to drugs” – the singer apologises that “it doesn’t get more cheery” before the funereal imagery of ‘Burning Like a Witch in the Rain’ is aptly embellished with some mournful guitar vibrato. 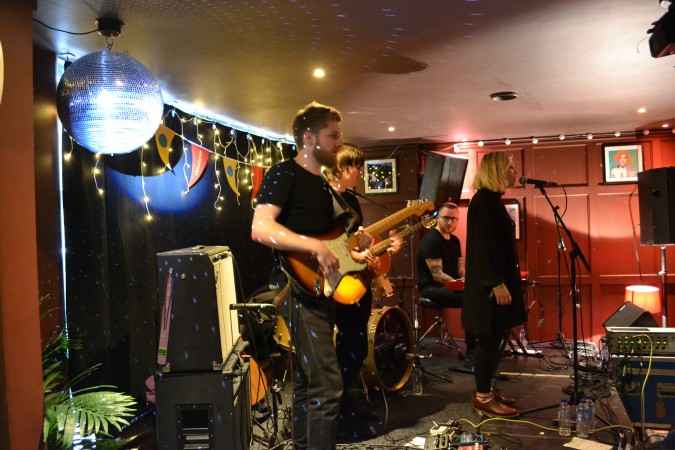 After the swiftest devouring of a Pieminister in human history – food ordered, eaten and paid for in approximately 7 ½ minutes – it’s a return to The Island for grungy psyche rock trio Cosa Rosa. With their ferocious delivery of guitar, bass and drums, the Nottingham group bare a resemblance to Nirvana; frontman Joe Wetherall, his face lost within swaying mane of red hair, even looks like a young Kurt Cobain circa 1992. Standout tune ‘Little Leper’ is an angry assault combined with a melodic awareness (there’s certainly a tinge of Amy Winehouses’ ‘You Know I’m No Good’) perhaps alluded to in Wetherall’s sporting an Abbey Road T-Shirt. The satisfying racket of Seattle grunge blended with a swampy psychedelic twist could be the loudest of this year’s festival. 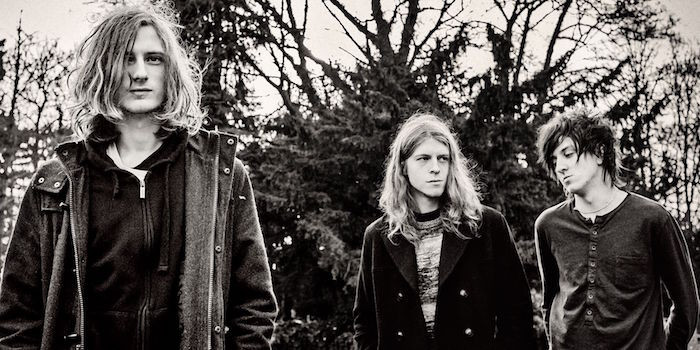 A random selection and a walk across to The Stage & Hounds lead us to local band Fairview’s 8pm performance. With the venue lying somewhat on the outskirts of the festival, it appears that the extra walk has proved too uninviting for most and it’s unfortunately a mere smattering of folks in attendance. Regardless, the band deliver a spirited set of what they described as their “moody indie rock” featuring yearning lyricism and anthemic choruses. With the hybrid appearance of Morrissey and Richard Hawley, the frontman bears a slight vocal resemblance to Richard Ashcroft, particularly during the “I’ll be in love, in my head” refrain of ‘Snowstorm Paralysis’. 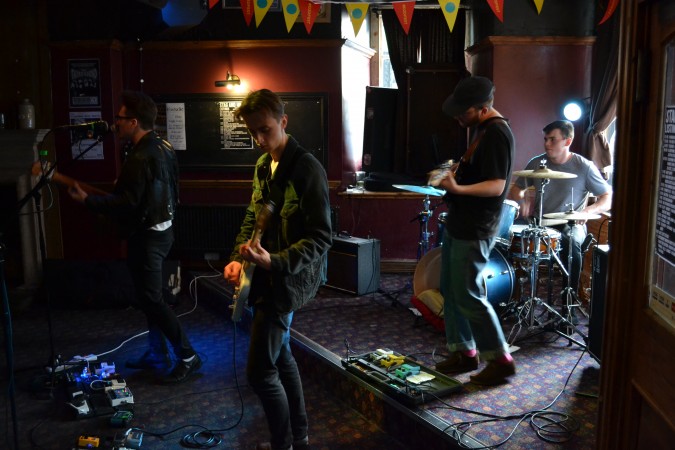 One way of helping to negotiate the minefield of musical choice is of course to share notes and swap ideas, and it is a recommendation that leads to Night Beats’ electrifying 9pm slot at Thekla. Each donning a Stetson, singer/guitarist Lee Blackwell and bassist Jakob Boden are the epitome of cowboy cool as the Seattle garage rock trio cram a rapid-fire 10 song set into their allocated 30 minutes. ‘Bad Love’ is a stomping slice of psychedelic rock while the temperature visibly increases with the sweat dripping from Blackwell’s hair during the frenetic riffs of ‘No Cops’. A swaggering set full of sharp and danceable garage rock riffs extends when a call to cut their final song is ignored; the crowd jump around like lunatics, a pint of beer is spilt and, in that moment, Dot To Dot has truly come alive. 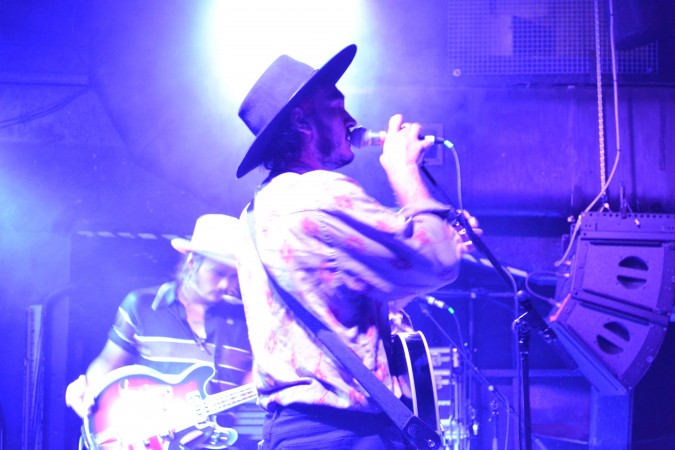 The main room at The Louisiana gradually fills to capacity in anticipation of the 10.30pm performance by Ipswich born and Seattle bred singer-songwriter Barns Courtney. His Big songs, sonorous voice (containing a slight tinge of Caleb Followill) and unrestrained stage patter provide a thoroughly entertaining 30 minute set (though he argues that he “should at least get 35”). The brilliant ‘Glitter and Gold’ is Courtney’s standout tune and a riveting example of the musical drama that can be conjured by one man and an acoustic guitar. 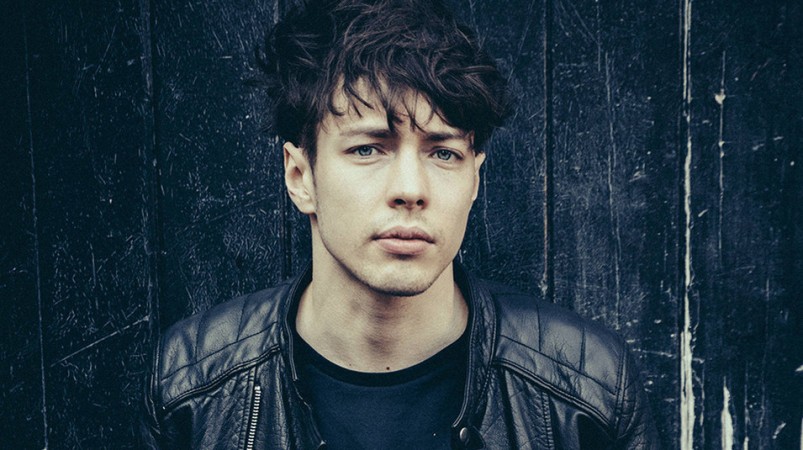 Ever garrulous between songs, Courtney labels a couple of fans at the front as “special” for dancing without the need for drums and pulls off passable Eastern European and Wakefield accents. The audience clap along to ‘Fire’ provides a powerful coda to a strongly appreciated set; in fact it feels so emphatic as to be thoroughly deserving as a swansong to Dot To Dot 2016.