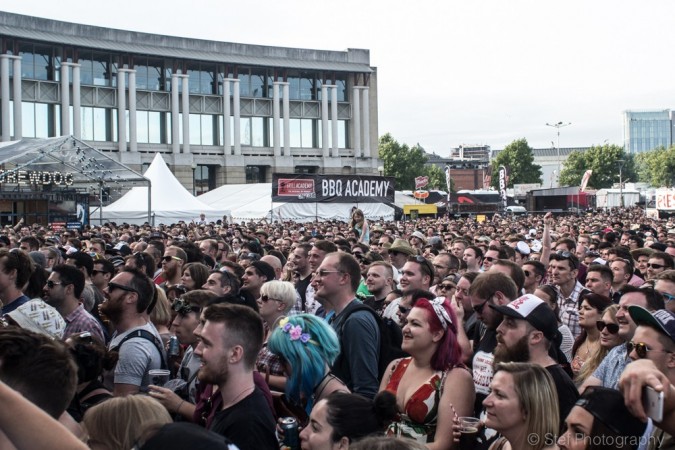 It’s a beautiful mid-July afternoon, the sun beating cheerfully down on Millennium Square as I meet for a 2pm rendezvous with my Fix compatriots. Sunny spirits are somewhat dampened, however, upon sighting the extensive queue that stretches back so far across the square that even Ibbeson’s Cary Grant statue has the close company of dozens of nascent revellers. Fortunately, being charmed types with press credentials we are able to eschew the patience sapping demands of mass queuing and within minutes we are adorned with wristbands and amongst the “meat, music and mayhem” of Grillstock 2015.

After pints of lager all round at the Brewdog bar, we head for the main stage to check out the filthy blues rawness of British duo Heymoonshaker. Our arrival is met by the sound of the band’s beatboxer Dave Crowe addressing the crowd after a customary three song intro; claiming that people standing up makes him feel like he has “balls of steel”, he demands that those seated on the paving should rise to their feet before he launches into a beatbox driven duet with guitarist/vocalist Andy BaLcon (capital L absolutely intentional) belting out the strangulated growl of his vocals. 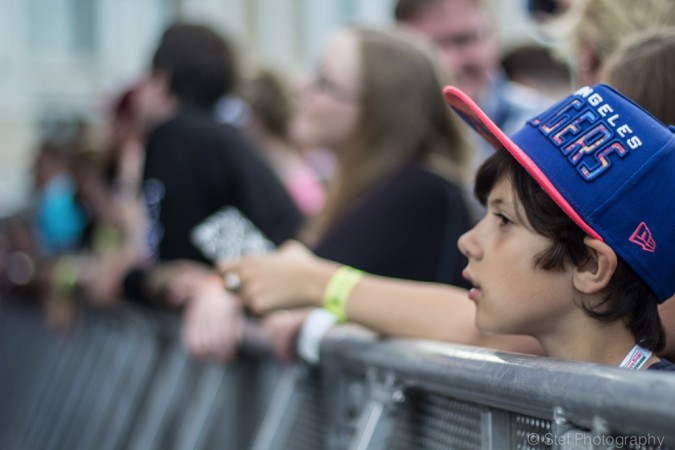 Playing a gritty form of blues rock, alternating between moody acoustic jams and higher energy distortions, Heymoonshaker’s uniqueness lies in it’s central featuring of Crowe’s beat boxing abilities. Furthermore, attired in ill-fitting jeans and a dirty vest, Crowe looks very much like an extra from Trainspotting. He also does a tidy sideline in blathering, faux-inspirational, self-help pronouncements: “Just be happy – success is a by-product” along with “You are sexy; even if you’re not good looking or don’t have fashionable clothes, say ‘fuck it’ I am sexy‘”. It’s the most inspiring onstage badinage since Eric Clapton’s pro-Enoch Powell breakdown in 1976.

“Are you ready to see people in a world of pain?” These are the words that herald in the start of the sadistic showcase of this year’s Chill Eating Competition. With dual jets of inferno propelled upwards to signal the competition’s commencement, ten brave, nay foolhardy, souls devour their first chillies – the only victim of round one being Annabelle who is eliminated after not being able to resist a leavening sip from the container of milk provided. Round two features jalapeno peppers; bald chap Ollie takes it very much in his stride along with Damien who is so manly, I am reliably informed, that his foot long beard is his equivalent of the “twelve o’clock shadow”. 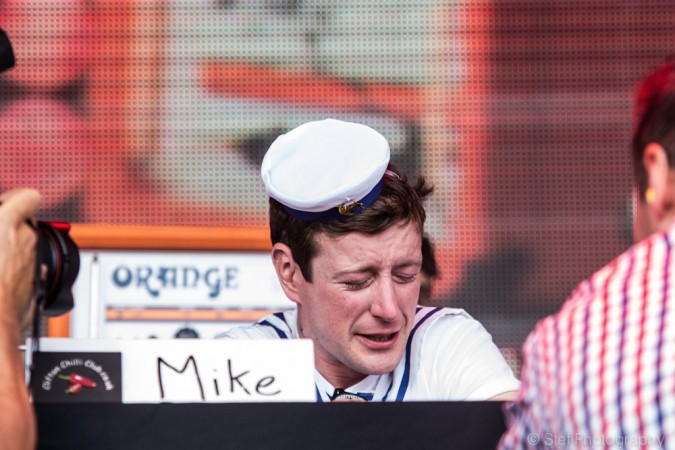 Rounds three, four and five feature Bullet, Sweet Hot and two Finger Chillies respectively; all nine remaining contestants survive although Rusty is clearly suffering and is in danger of acquiring the same hue as his luminous Dale Winton coloured headband. Round six sees Birdseye Chillies claim Heather while Ollie and Damian remain ostensibly unaffected. After Scotch Bonnets in round seven, Danielle and Aiden are eliminated to the tune of Queen’s ‘Another One Bites The Dust’. Henry, who happens to be dressed as a woman, struggles and it’s perhaps only the mass chanting of his name that sees him into round eight.

With five contestants remaining, the Red Habaneros of the next round eliminate early favourite Damien along with Rusty. Mike, who is dressed up as a camp sailor, is left with such a fierce grimace on his face that it looks like he is trying to shit out a pinecone; after a Chocolate Habanero in the following round he bows out, leaving Ollie and Matt the last men standing. Quite possibly a whole world of hurt is being suffered behind his aviator shades but it seems as if Ollie hasn’t changed expression for the duration. Then two Ghost Chillies get the better of him in round eleven and, to the wondrous sight of a bald man being sick into a bin-liner, Matt is declared this year’s winner! 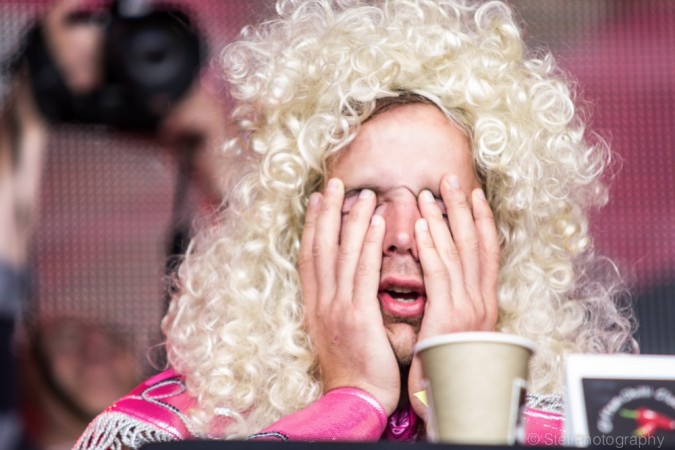 Big Joe Bone is next up on the main stage, performing his brand of acoustic blues and roots music. With guitar, banjo, harmonica, a slide on his pinky and the stomp of foot percussion, he ably plays some joyfully upbeat bluegrass and has the demeanour of a younger Seasick Steve. The Wales-based bluesman sings with an infectiously frantic and garbled delivery and wins over an increasingly enthusiastic crowd. “This is alright, innit?” he says with a huge smile on his face and he later acknowledges his gratitude at the audience being so friendly.

During a track by his hero Mississippi Fred McDowell, the loud bang of a blown fuse emanates from the stage; unperturbed and with encouragement from a crowd that he has charmed convincingly, he carries on regardless and belts out a tune or two in true unplugged fashion. 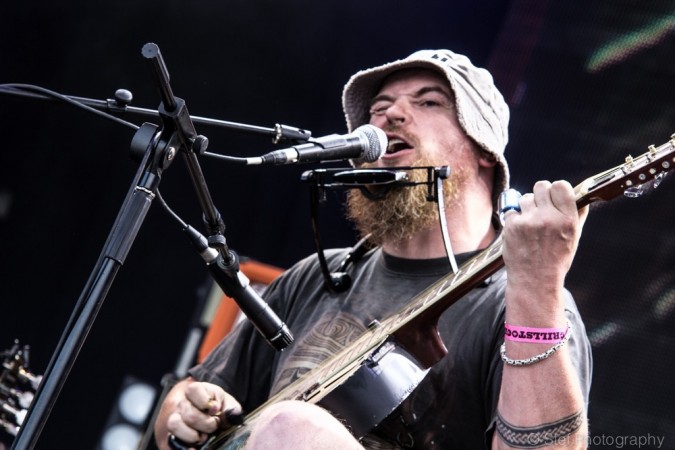 After the sound problems are resolved, Exeter band The Computers take to the stage at a little past 5pm. All snappily dressed in suits, the five-piece deliver an energetic set of guitar-driven garage rock. “Witness the sound of the Mother Fuckin’ Computers” bellows confident front man Alex Kershaw before he exercises some Little Richard adlibs during another healthy slab of anthemic rock. With subsequent tracks utilising old fashioned rock n roll piano combined with crisp garage rock chords, The Computers provide an entertaining show and Kershaw, though vacillating between the likeable and not so likeable, is an animatedly entertaining stage presence; he requests that someone throw him the beach ball that has been bouncing around the audience so he can swing his guitar like a makeshift baseball bat and he proposes a “Wall of Death” for the final song of the set. 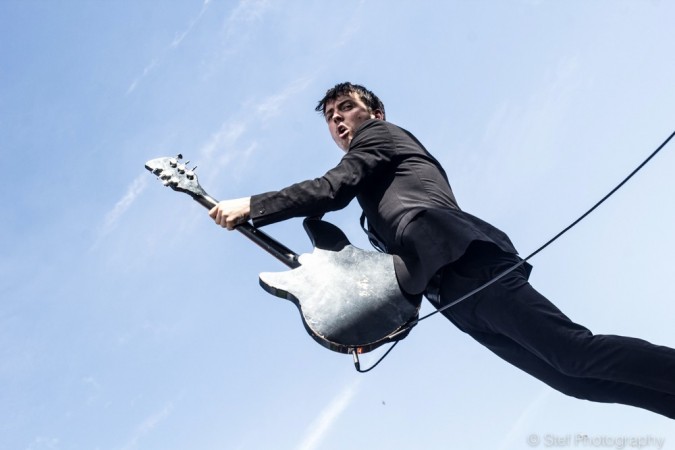 The biggest crowd of the evening thus far then forms around the main stage for the comedy stylings of tongue-in-cheek rap outfit Goldie Lookin Chain. Introduced somewhat dubiously as “legends”, opening number ‘Straight Outta Newport’ gets the audiences’ arms flailing and we hear a quick blast of Sabrina’s ‘Boys, Boys, Boys’. In sampling Vanilla Ice sampling Queen and David Bowie, the satirical chavsters then perform ‘Ice Ice Dildo’ before ‘Sister’ which contains the Dylanesque poetry of “Can I please fuck your sister?” ‘Guns Don’t Kill People, Rappers Do!’ offers a brief respite from the lascivious themes before normal service is resumed with ‘Your Mother Has A Penis’ and a lyric mentioning “bald vagina”. One thinks of headliners De La Soul sitting backstage pondering upon the direction that hip-hop has taken. Goldie Lookin Chain are what they are: daft, stupid, a little cheeky, a novelty act enjoyable enough to watch amongst a crowd while having a pint or two with mates. 2006 Celebrity Big Brother legend Maggot is conspicuous by his absence. 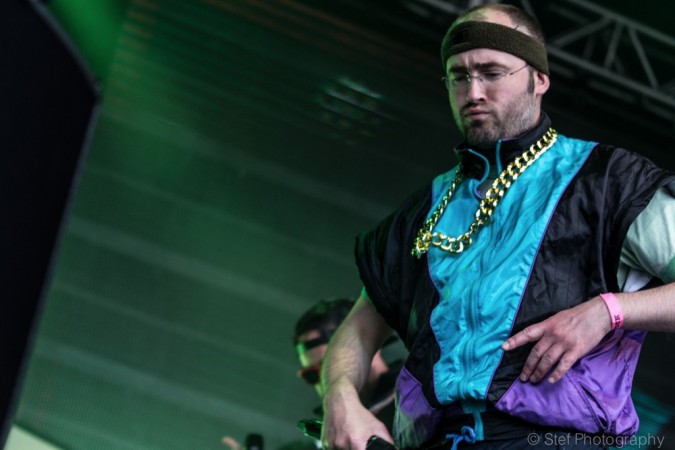 Cajoling us to “Party like a mother fucker”, headliners De La Soul begin their set determined to whip the Grillstock crowd into celebratory mood. Plug 2 challenges the oft repeated sentiments that hip-hop is for young people and asserts that “I’m gonna die doing this shit”. After ‘The Grind Date’, further technical difficulties leave Plug 1 and 2 leading “my side, your side” call and response games as they enquire as to which side the party is at. The light, jazzy groove of ‘Potholes In My Lawn’ follows the resolution to sound problems along with live sing-along favourite ‘Saturdays’.

*De La Soul refused photography at the event. Bloody divas. Instead, here’s a photograph of Fred Dineage circa 1983.

As a spot of rain begins to fall, standout track ‘Me, Myself and I’ assures that the party spirits are far from being dampened and a further demand to “Check it out party people” from Plug 2 sees a torrent of audience hands swaying to the rhythm of Plug 3’s grooves. Towards the end of the set Plug 1 stops rapping and falls on to his back; rather than the previous comments about performing hip-hop until death being made a devastating reality, it’s a piece of showmanship and, in launching back onto his feet, De La Soul explode into their final number. Some will be disappointed that some old favourites such as ‘Eye Know’ were missing but the New York rappers prove that they remain lively and fun hosts to any Saturday night party.