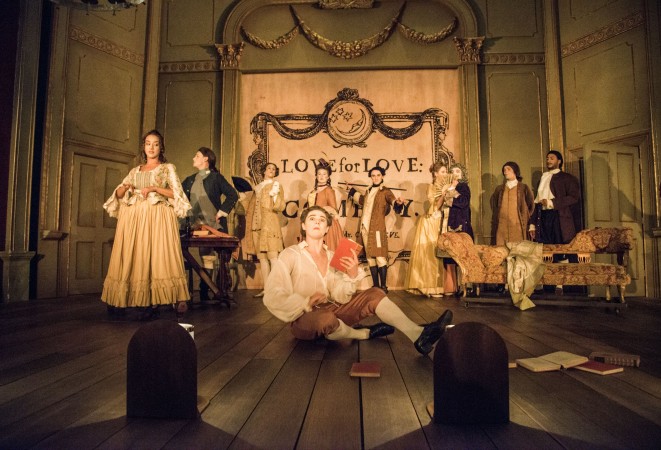 Period farces seem to be very much de jour this season for Bristol’s theatrical community, as this Bristol Old Vic Theatre School renewal of William Congreve’s Love for Love follows hot on the heels of Tobacco Factory’s School for Scandal.

Not Congreve’s most popular play Love for Love is nonetheless the perfect vehicle for young actors and technical staff to learn their craft on the fly, providing many of the practical and theatrical challenges that they will be expected to overcome on a regular basis once they become fully fledged professionals.

A restoration comedy with all the dry wit and intrigue that one would expect of the late 1600s, Congreve’s tale follows the impudent and extravagant Valentine (Timothy Innes) as he schemes and plots to outwit his debtors and belligerent father Sir Sampson Legend (Karl Wilson) whilst utterly enraptured by the object of his affections Angelica (Pippa Moss). As battle lines are drawn over Valentine’s inheritance his sailor brother Ben (Harrison Reeves) and other equally conniving and promiscuous acquaintances (Jeremy – Michael Harkin, Scandal – Ewan Black, Tattle – Sam Woolf, Foresight – Dominic Allen, Miss Prue – Shala Nyx, Mrs. Frail – Rosie Nicholls, Mrs Foresight – Amy Barnes) are drawn into their web of lies, as the murky world of late 1600s England is exposed for all its false flattery and back stair manoeuvring. 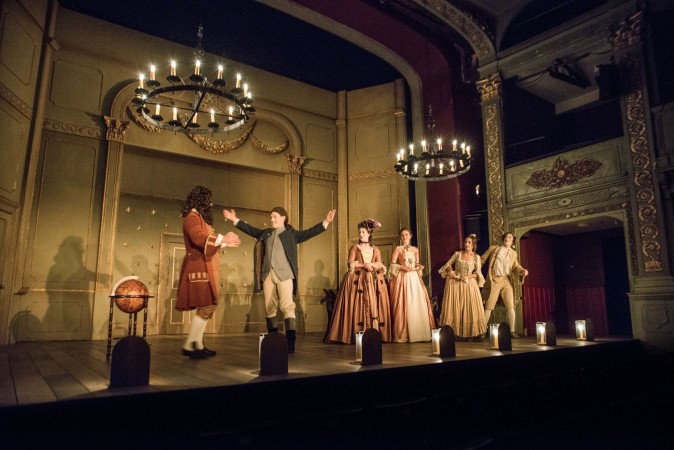 One can only imagine that this was how the old theatre was always intended to be presented when it was opened back in 1766, as the stage is illuminated only by candlelight throughout. The simplicity of the portrayal is in keeping with the traditional style taken everywhere you look. From the candle chandeliers to the period costumes (more shabby cad, as would have been more apt for the time) or even the large dated backdrops the feel and flavour of the era has been lovingly recreated by Lizzie Leech (set designer), Elina Pieridou (costume design) and Tim Streader (lighting designer).

Even little touches such as the fact that all the instrumental music heard in the production is played by the cast themselves exemplifies the many strings to the young cast’s bows. And it really is the cast that shines here. From Tattle & Miss Prue’s forbidden liaison in Regent Park to the constant scheming of the lady about town Mrs Frail, to the baby faced zaniness of Valentine (that recalls a youthful Leonardo di Caprio) the cast really can’t be faulted for a performance that is well beyond their years. The real star turn of the night is Ryan McKen as the Foresight’s Nurse, who plays the part with a thick Caribbean drawl and the sensibility of a pantomime dame. His vibrancy and melodramatic histrionics really do steal the show whilst he is on stage. 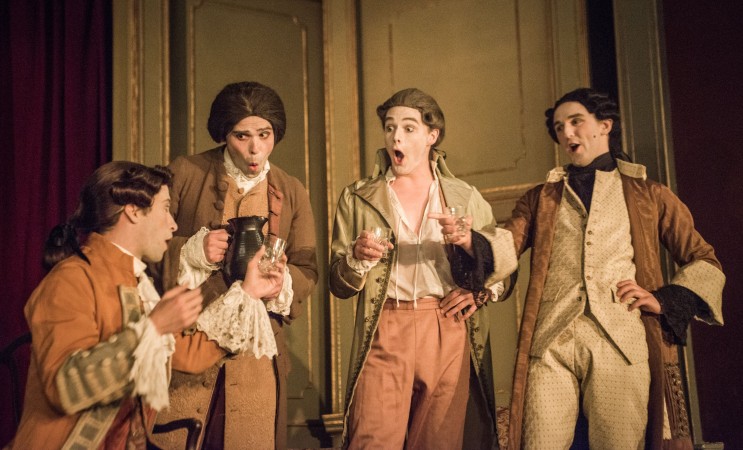 Weighing in at nearly 3 hours in length this is a truly verbose (albeit historically accurate) piece of theatre and whilst a real exhibition for the students talents the plays pedestrian script/narrative is not nearly as much fun for its audience and does feel somewhat bloated by modern standards.

With an elegance befitting of the salubrious surrounds Love for Love showcases yet another stellar class of Bristol Old Vic’s Theatre School actors and technical crew whilst truthfully recreating a period comedy; sadly whilst a good choice for its performers the selection of Congreve’s play is not nearly as entertaining for its audience.