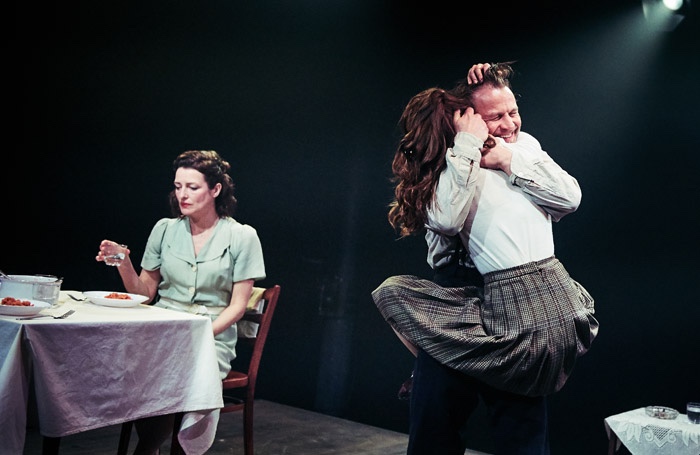 Driven by outstanding performances by the cast, the Tobacco Factory’s retelling of Arthur Miller’s Modern classic A View from the Bridge is just remarkable.

Staying true to the original script and setting, Director Mike Tweddle & his Assistant Sally Beck Wippman have imbued the play with a passion and force, which is irrepressible and captivating. 2 and a half hours fly by as we live every blow of this 1950s Greek tragedy.

The second performance in the inaugural Factory Company Season sees the professional cast augmented by 5 local amateur performers (rotated each night) who have been training at the theatre as part of a wider community engagement project. The biggest compliment one can pay to the novice thespians is that they blend seamlessly into the production as if they have been performing on stage all their lives.

Thematically Miller’s plays are oft described as being particularly moralist, with distinct “Good vs Evil” subplots (see the McCarthyism allegory in The Crucible). A View from the Bridge, however, is distinctly grey in comparison.

Following the tragic triumvirate of Eddie Carbone (Mark Letheren), his wife Beatrice (Katy Stephens) and her orphaned niece Catherine (Laura Waldren), the narrative is one of love and betrayal, with a dose of comedic asides offsetting the darker moments. These three are the heartbeat of the performance and each is utterly faultless.

Narrated throughout by local neighbourhood lawyer Alfieri (Simon Armstrong), the action is set against the backdrop of a distinctly Italian borough in 1950s Brooklyn. The staging reeks of Americana, with all the iconic touches one would expect from the period. Industrial clicking rings out periodically as the cast take it in turn to raise and lower the New York style dome pendant light on its mechanized chain. Every click sounds like a rack being tightened, mirroring the increasing  tension on the stage. Atmospheric lighting (Matthew Graham – Lighting Designer) and superb audio effects (Max Pppenheim – composer and sound designer) submerge the audience in the proceedings so wholly that it feels like we are living within a Scorsese film.

A good man at heart longshoreman Eddie wears his Italian heritage like a badge of honour but is every inch the “huddled masses” the US embraced in their millions at the start of the 20th Century.

Things begin to turn sour for Eddie, and the family at large, after they take in two of Beatrice’s Sicilian cousins (the bull like Marco – Aaron Anthony, & his charming brother Rodolpho – Joseph Tweedale). Both have come to America illegally for work, and when the affable Rodolpho strikes up a relationship with Catherine, Eddie’s overprotective approach begins to border on obsessive affection.

As his love for her begins to snowball out of control it begins to devour all his other relationships, corrupting and disfiguring his character beyond all recognition, ultimately ending in him becoming the very thing he despises most.

Clearly conflicted by his Oedipus like adoration for his niece, Letheren’s Eddie is fervently flawed and yet in complete denial as to his own intentions, pleading at different times with Beatrice and confidant Alfieri that his intentions are in no way inappropriate.

Letheren’s portrayal of Eddie, and his Brooklyn accent is so convincing as to necessitate a check of his passport to confirm he is not in fact a naturalised New Yorker. It really is a sensational performance.

Many of Stephens and Letheren’s interactions are comedic gold, with one liners delivered with perfect timing, to hilarious effect.

Waldren’s Catherine is innocent and overwhelmed by the circumstances spiralling out of control around her.

Ably supported by the rest of the cast the standing ovation they receive at the shows conclusion is totally deserved.