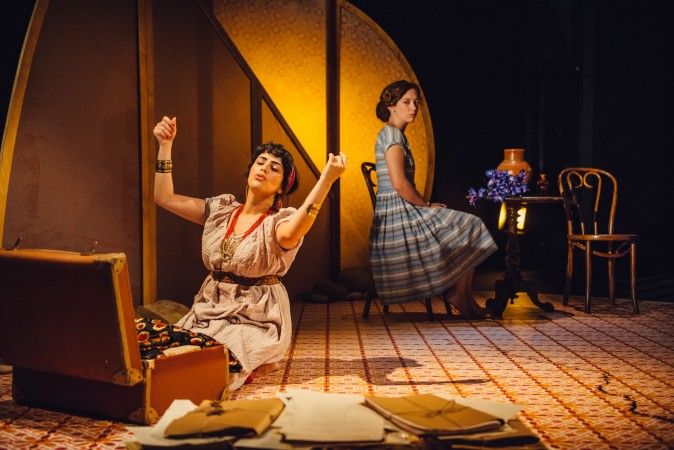 In 1942, Albert Camus’ existential masterpiece l’Etranger introduced readers to Meursault, an indifferent French Algerian who murders an Arab on a beach with five shots of a pistol. Sentenced to death as much for his honesty as for the violent act itself, the novel exposed the vulnerability of the outsider, the man that refuses to ‘play the game’, and remains one of the most influential pieces of literature of the Twentieth Century.

Fast-forward seven decades and l’Etranger finds itself the inspiration for Outsiders, the latest play from York’s Pilot Theatre, writer Emteaz Hussain and Director Fraser Corfield.  It tells the story from the perspective of two women, Marie Cardona and Sumaya Nuradin – Marie the fiance of Meursault, Sumaya the sister of the Arab – many years on from the shooting. The pair are caught in a despairing cycle, living through the tumultuous days again and again.

In a dialogue-heavy show, the twin performers Lou Broadbent and Sara Sadeghi utilise raw emotion to strong effect. Rather than proceeding in chronological order, the replaying of the shooting and corresponding events flits around, much like intense memories. There are neat callbacks to the original text – Marie mentions the best things in life being free, such as the sun, alluding to the solar glint which encourages Meursault to shoot.

Re-imagining a classic and much-loved cultural artifact can prove to be a double edged sword – audiences are drawn in by their prior knowledge of the piece, but they can equally be displeased by a less-than-perfect interpretation – as JJ Abrams may well find out in the coming weeks. Outsiders brings forth an interesting new female perspective on what was very much a male-centric novel, but in a way it feels caught between relying on the original story and attempting to break free from its shackles.