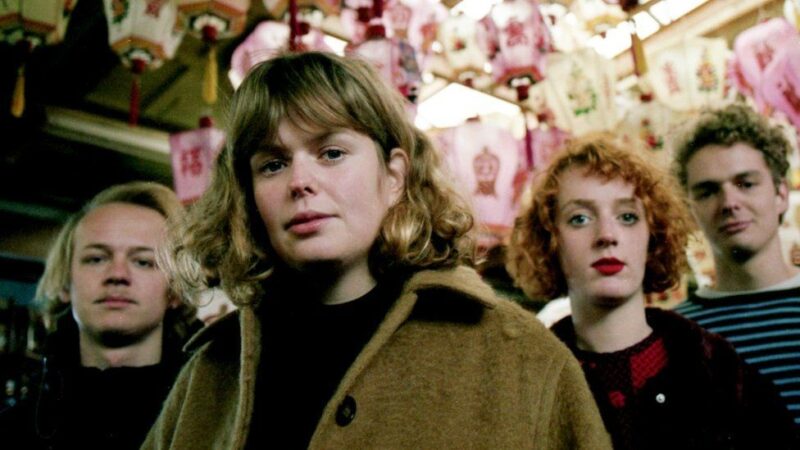 Having released Welcome Break – the follow up to their 2019 debut album Boat – in the autumn of 2021, the critical praise steeped upon their sophomore effort included a four-star Uncut review declaring that the Dutch quartet had perfected a kind of ‘Britpop 2.0’. While Pip Blom (the singer/guitarist who gives her name to the band) and guitarist brother Tender were apparently raised on the old Blur and Oasis records beloved by their parents, the group’s simple and catchy indie rock would perhaps sit more comfortably aside the likes of Elastica or Sleeper.

The evening’s second tune ‘You Don’t Want This’, with its instantly graspable melody, fuzzy straightforward guitar riffs and switch of pace to a more upbeat chorus, serves as the quintessential template for the band’s arsenal of 3-4 minute indie pop tunes. Sister Blom then asserts that “it’s great to be back” in Bristol after a smaller scale gig at Thekla last time around.

The bobbing barre chords and gliding lead lines of ‘Tired’ – “I feel so tired I fall asleep with the lights on” – features another dynamically delivered chorus and backing vocals from Tender that are so ardent as to be totally at odds with the song’s theme of lethargy. And lethargy is certainly something that this band cannot be accused of; all tonight’s fourteen tunes are delivered with a gusto and verve that makes a nonsense of any would-be desires for the music to be more complex. The Blom siblings – as bassist Derek Mercks and drummer Gini Cameron hold down a solid backbone in the centre – are each a swaying, bouncing bookend at opposite sides of the stage.

‘Bedhead’, a seeming lament to being lost in a spiral of depression (“toxic thoughts taking over my head/Every day felt way too long”) slows things down slightly with Pip’s clean strummed guitar and Cameron taking a backseat to a drum machine; a few smiles break out on stage when Mercks stops the drum machine a beat too late at the song’s coda. The only acknowledgement that tonight is St Valentine’s day arrives when Tender says that “this is for all the love birds” when introducing ‘I Think I’m In Love’, an early single from 2017.

Blasting through their full set of indie-pop nuggets in a relentless sprint, there isn’t much time for between song badinage. However, as Pip informs us, the band are – somewhat mysteriously – yet to see any vinyl copies of their latest album, although apparently “there are some in The Netherlands.” This essentially serves as the introduction to 2018 single ‘Come Home’ which arguably remains the shiniest example of the band’s ability to wield a memorable chorus.

Pip Blom have the pleasing visage of slightly nerdy, unpretentious pals having a ball on stage; Sister Blom emanates warmth and genuine gratitude throughout and the bandmates frequently lock eyes and smile in each other’s direction. Thus, the spiky punk rock of ‘I Know I’m Not Easy To Like’ – perhaps the most sassy and attitude laden track in the band’s repertoire – sits rather askew on their ostensibly friendly shoulders.

It’s a frenetic set of indie pop that clocks in at the fifty minute mark. Tonight’s audience – perhaps making up around 60% of the venue’s 650 capacity – have remained an engaged but generally controlled mass of nodding heads and swaying torsos. Maybe that could be explained by all the couples in the crowd. By the time we get to closer ‘Daddy Issues’, however, the Dutch foursome have finally inspired pockets of Valentine’s Day delirium.