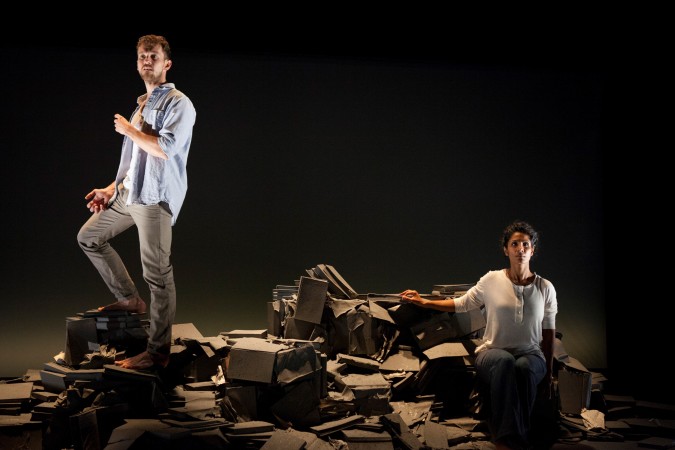 Two worlds collide in Transport theatre’s remarkable story of an Indian migrant & a British seaside resident, whose lives are intertwined by circumstances out of their control in a tale that spans some 20 years (2015 to 2035 to be precise) and takes us from the tropical mangroves of the Bay of Bengal to the white cliffs of Dover.

Often found producing interesting pieces on equally challenging topics (see 2011’s Invisible or 2013’s 1001 Nights – both of which detail the challenges faced by migrants in the UK) Transport have consistently exposed the British obsession with immigration and tonight’s story again delves into this most topical of issues.

The Edge also contains the equally contemporary subject of climate change, and more specifically the threat of rising seas on communities who live within its destructive grasp throughout the world.

An utterly intense show from the outset Tim Lewis and Balvinder Sopal give performances that are so forceful as to be stern, as they recite the tales of how two people from either ends of the world (both geographically and economically) come to meet on a bleak British beach.

James Button’s stage is a startling jumble of grey rocks set against a projector backdrop (Will Duke) of blues, greys and lighting flashes, outlined by fine lighting by Matt Haskins.

Douglas Rintoul’s creation is given even more room to breathe by the great use of space within the play (as choreogpahed by Julie Cunningham) with the vertical explored as much as the horizontal, as both actors display great core strength as they contort themselves against the screen on the rocks.

Layering complex issues upon a creative bedrock The Edge brings an interesting twist to two of the most pressing issues we face in the world today.