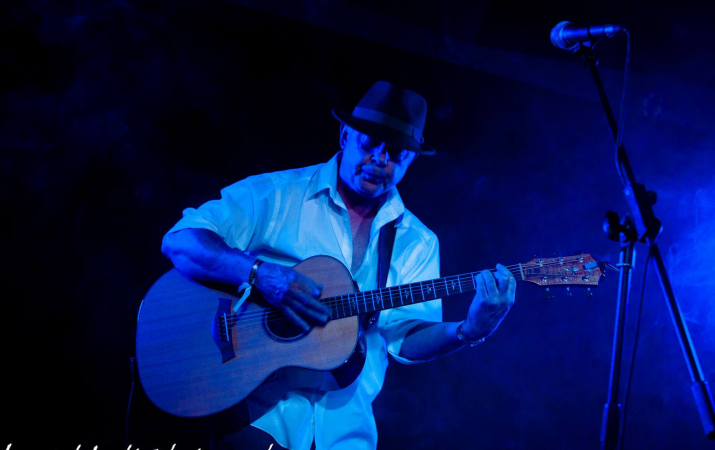 If you were to ask anyone involved in Glastonbury’s bustling music scene about Steve Henderson the response will undoubtedly be positive. When it comes to live music in Glastonbury, it’s rare a night passes without some kind of shindig and Henderson’s efforts as a facilitator have been integral to the success of events that are key fixtures in the calendars of local punters. Many feel the town is in the midst of a golden era with regards to musical offerings and Steve is near the top of the list when it comes to dishing out respect and gratitude for what they’re enjoying.

Of course, he performs too – a modest chap, Henderson is an understated gent and underrated in the opinions of fellow performers. As a songwriter, his talent is undeniable and the area’s most lauded and accomplished musicians are always quick to lavish praise on his delightful word-smithery. At a recent performance, the highly regarded Nick Parker told his audience that listening to Steve Henderson has given him inspiration to write and when listening to beautiful tracks like “Stranger Abroad” and “Sit Down And Lie To Me” it’s not difficult to understand why his songwriting craft is looked upon so admirably.

To put it politely, Steve’s been performing for quite some time now,  so his recent completion of a debut EP, ‘Silver Birch,’ is one that’s much welcomed by those who know and love him. It couldn’t have come soon enough! Ahead of the release, we caught up with Mr Henderson to find out why it’s taken so long and to also find out a bit more about him for readers of The Fix who are yet to have stumbled across the music of this local legend…

Your songwriting always fascinates me; knowing you, it’s clear the subject matter is a departure from your personal life, so what is it that inspires you?

When I’m writing a song, finding the subject matter is the hardest thing. Once I have that then I can try and expand it in the best way I can. If it’s a love song (which is a well worn path) then I try and see it from another angle, while still keeping the language grounded in the every day if that makes sense; the feelings on a first date, the feelings for someone who’s out of reach or, as in “Stranger Abroad,” the way that falling out of a relationship can make you feel isolated and lost. I love reading other peoples lyrics so I always try to make mine interesting for others to read. I don’t like lazy rhymes and hopefully I avoid those. If I wrote from my own perspective all the time the words would soon become dull so I try and imagine other, more interesting scenarios.

If you had to pitch your music to someone on the street, what would you say?

I write simple songs that I hope end up being more than the sum of their parts. The chords are straight forward, there is no fancy finger work and the lyrics are down to earth but together with the tune I try and create something special that people will like and that I’m proud of. I’m intrigued by the relationship between the melody and the chords. It’s hard to describe but there are some songs that when I hear the vocal sung in a certain way over the music it makes me laugh and cheer inside because they work so well together. In a nutshell, I try and do that.

Many have lauded you as a performer and songwriter for years, so it’s quite surprising to hear that this is your first recording. Why now?

I have dabbled with recording on several occasions but through a lack of self belief I haven’t given the time or effort to produce anything other than a basic demo. Last year I met with James and Charlotte at Orchard Studios (Barton St David, Somerset) and did an evening of recording with them. Straight away I knew that I was in the right place. Although the recording was just guitar and vocal it sounded how I wanted my recordings to sound and it gave me an enthusiasm to produce something that I would be happy for people to listen to. 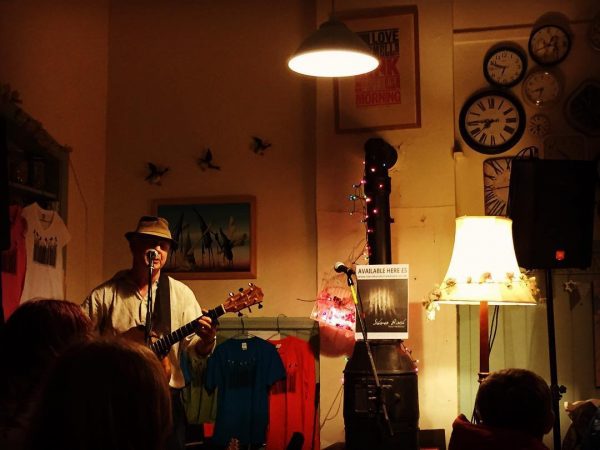 You’ve got a strong back catalogue to choose from – how did you narrow down to get the final track list?

I originally wanted to record all new songs for the CD and five of the tracks were pretty new when I started the sessions. “Stranger Abroad” is an old song that always gets a good reaction at gigs and it added a nice contrast to the more strummy songs. With this CD I wanted to show a snapshot of what I do and I think you get that. Fast, slow, loud, quiet, serious and less serious. When I do the next recording that will again be a mixture of new songs and a couple of older ones.

What are your hopes for this release?

I play pretty regularly in the Glastonbury area, which is great, but I want to go further afield and you have to have something to show people. I’m happy with the recording and the whole package of the CD and I think it shows that I’m serious about what I do. Hopefully anyway! Also, whenever I have done gigs in the past I have been the only performer not selling CDs so, it’s nice for people to be able to listen to my music in a way other than ‘live’. They should be able to pick up on some of the detail and subtleties that they might miss in a live situation.

I definitely want to start recording again soon. I have a bunch of songs that need fine tuning so at the moment I’m practising those. I don’t want to turn up at the studio under prepared. I enjoyed recording and I learned a lot so I hope that the next CD will show that.

What’s your fondest memory as a performer?

As a performer it is obviously great to get positive comments after a gig. You can tell the difference between somebody who is just being polite and someone who genuinely enjoyed your set and, of course, I get both and that spurs me on to improve my live performance. When I watch Nick Parker perform I am struck by how comfortable he appears on stage, with his playing, singing and his interaction with the audience. He has worked hard to get to that point and that makes me want to work harder to emulate that. In my opinion I am a better writer than performer and that needs addressing. To me the most rewarding thing about being a musician in this area is the people that it has brought me into contact with. Every day I think how lucky I am to be where I am, doing what I do (be that work, rest or play) and being surrounded by fantastic family and friends.

Selected tracks from Steve Henderson can be listened to on Soundcloud via this link. ‘Silver Birch’ can be bought from his official website here from Friday 28th April. If you’re local to Glastonbury then copies can also be bought from Stephen’s Butchers on the High Street.