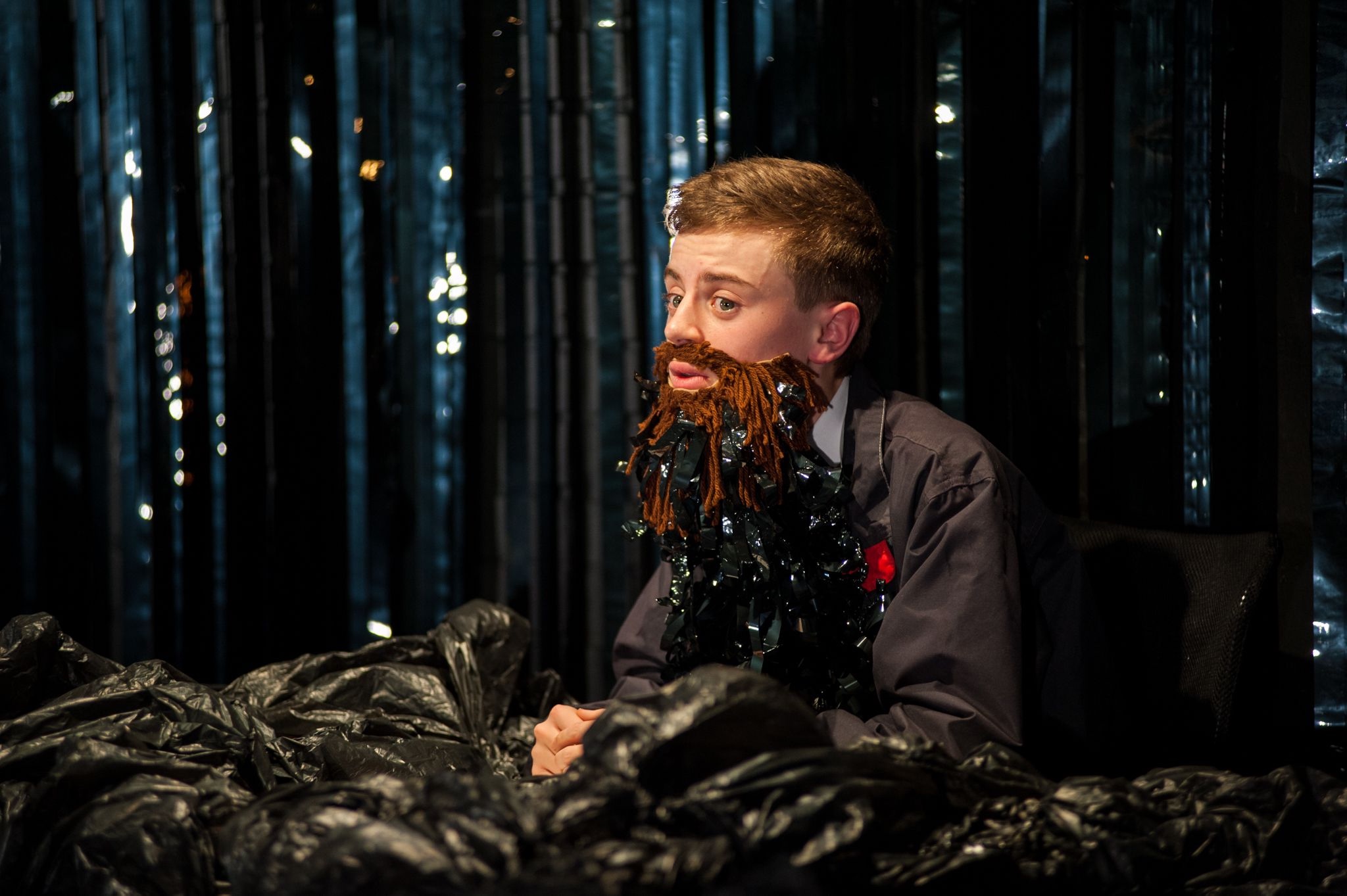 To describe The Gigantic Beard that was Evil as a mouthful of a title just doesn’t do it justice.

Similarly, to characterise this adaptation of Stephen Collins graphic novel of the same name, by Bristol Old Vic Young Company, as merely an uproarious riot is again to do it a disservice.

As comedic legend Lenny Bruce once said “the only honest art form is comedy – you can’t fake it”. This is often easier said than done, and yet there is something charmingly honest and unfettered in this show that strikes at the very heart of this age-old adage.

Perhaps it’s the youthfulness of the cast and production team, or even the whimsical nature of the narrative, whatever the case may be this is a delightfully funny and incisive production.

The coup of gaining the rights to bring this story to the stage in the first place is in itself a real triumph for the company, as Collins had previously turned down a number of offers to adapt his novel before he accepted theirs. He must now be assured that his confidence in director Stephanie Kempson was well placed.

Im sure Collins couldn’t hep but be impressed by the way in which the dark style and content of his original illustrations are lovingly reenacted in the black and white ambiance of stage tricks such as shadow puppetry and sympathetic lighting. It all helps to achieve the fantastical Roald Dahl-esque tenor that he was so clearly aping.

Yet, this reimagining is also very much focused on the here and now, with the underpinning political satire of a world obsessed with the ‘other’, or ‘an unnamed fear’, really striking a chord given the impending importance of the issue of immigration on the upcoming General Election later this year.

Indeed, the island of ‘Here’, on which the characters exist, feels very much like the bizarre and overtly contradictory land that Nigel Farage dreams about each night

The hostility and prejudice to ‘other’, or ‘foreign forces’, is further developed within the recent context of the rise of UKIP  and is vividly played out when the spokesperson for hate/buffoonery, aka the head of the ‘Anti-Beard League’ appears on a ‘Here’ talk show jabbing his finger, spitting out barbed catch-all buzz words/phrases and thrusting his views upon viewers in a manner that is clearly a parody of Farage’s now infamous appearance on Question Time. 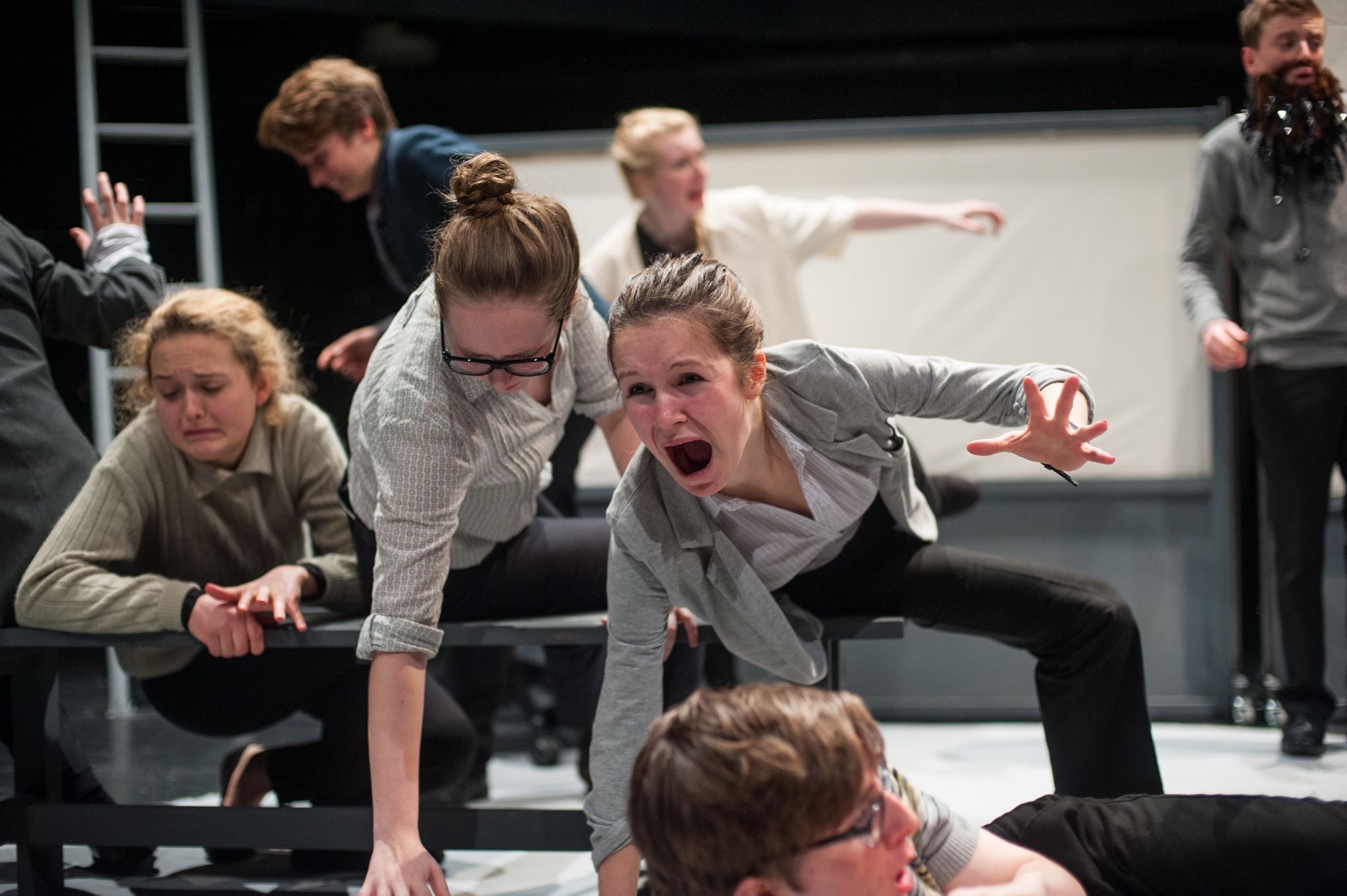 While Farage is one of the many sub-plots here, Oscar Adams, who plays our chief protagonist, Dave, is the dazzling star of the show, with a performance that belies his tender years. Sparingly funny, he resists the temptation to ham up the role – something that many more experienced actors would do well to take heed of – and conveys the Bangles obsessed, gaudy Rasputin look-a-like, as a true professional. It must be said that his gangly dance to ‘Eternal Flame’ is almost worth the entry fee in itself.

Elliot Winter, who plays Professor Darren Black, and is the senior member of the cast (yet still only 23-year-old), is not far behind and comes across with the sort of mature sophistication that his character requires, and that a man who can actually grow facial hair naturally possess amongst such young peers.

Kate Alhaesf who ably portrays the waif like numbers-bod from Dave’s office and the PM of ‘Here’, his other work colleague Tilley, and the head of the Anti-beard League also deserve special praise for their comedic performances that again add solidity to the overall performance. 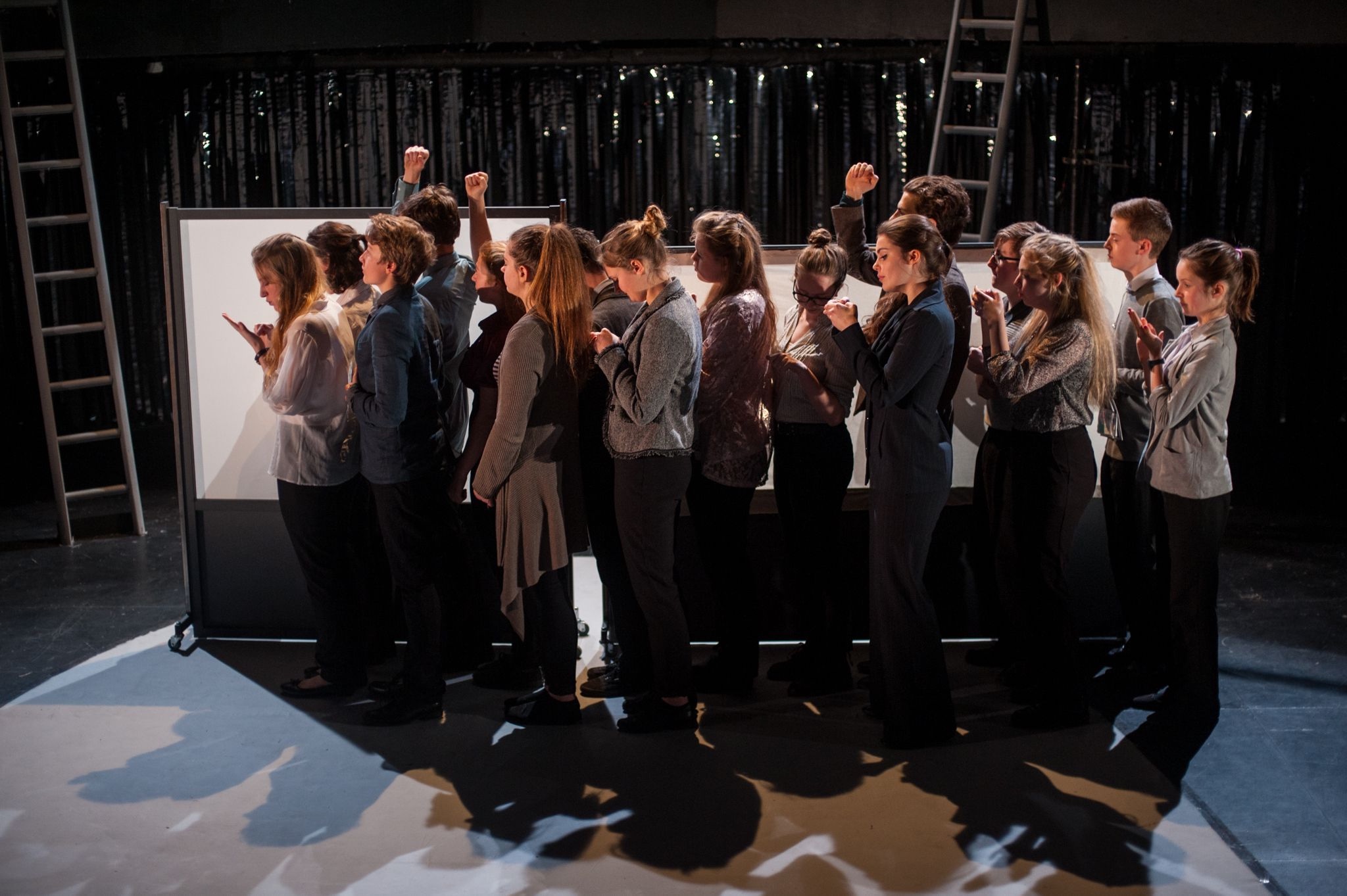 Although the first 30 minutes burns brighter than the rest of the performance this is still overall an absolute gem of a comedy, which only gains strength from its political and allegorical undertones.

A comedy fairy tale for our time that you can truly believe in.

Bravo to the cast and Stephanie Kempson for her superb direction.

Find out more by clicking here.

By Kevin McGough
All photos by ShotAway