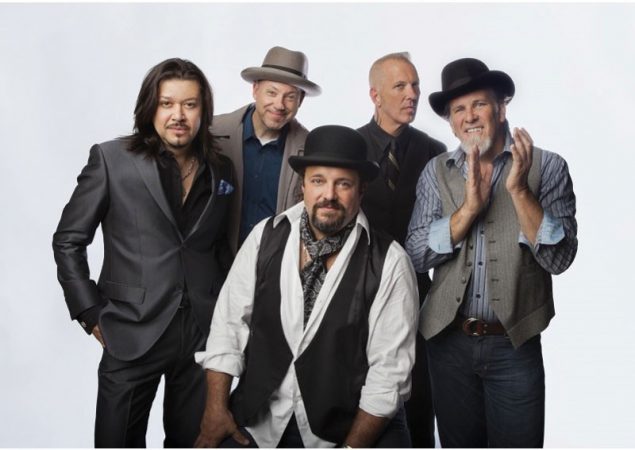 Considering that their 1998 single ‘Dance The Night Away’ peaked at number 4 in the UK while experiencing an enduring chart presence of 18 weeks, The Mavericks hold the misfortune that British audiences, by and large, would bestow upon them that most ignominious of epithets: that of being a “one hit wonder.” However, with a back catalogue of more virtuous – rather less cheesy – songs and an eclectic musical soup spanning everything from country to latino, swing and rockabilly, there’s ample evidence tonight that there’s more to the Florida band than all that.

It’s the band’s very first performance of a 3 week European tour and The Mavericks could barely sound sharper. However, that’s not to say that tonight’s performance doesn’t suffer some murky beginnings; opener ‘Easy as it Seems’ is partially obscured amidst the band’s mushy interaction with the venue’s acoustics and Eddie Perez’s guitar solo sinks with barely an audible trace during ‘Damned if you Do.’

With some sounds adjustments, or perhaps the Colston Hall’s uncanny sense of gradually improving acoustics, the band dynamic slips impressively into gear.  ‘I Think of You’ features wailing blues saxophone happily combine with whirligig keyboard while Malo holds a sublime operatic final note at the song’s coda. It’s the first instance where Malo’s sonorous voice can fully be appreciated; comparisons to Roy Orbison are perhaps a little generous but considering a 1993 live cover of ‘In Dreams’ – available for perusal on YouTube – not overwhelmingly so.

Malo, adorned in his customary cream coloured Stetson, only occasionally breaks off to interact with the audience; he reassures the crowd that the opening night of the tour in no excuse for a “dress rehearsal” and jokingly references keyboardist Jerry Dale McFadden’s polychrome suit and pork pie hat as evidence of the band’s focused approach. Certainly, the group’s seven musicians have arrived with A-games intact and there are two things that make The Mavericks stand out in the live forum; Firstly, the tightness and energetic finesse of the musicianship, particularly the excellent displays of trumpet, saxophone and an accordion occasionally wielded like something akin to a Hendrix guitar part.

Secondly, it’s the genre-spanning range of styles that the band deliver equally as adeptly. Typecast essentially as a country band, it would be folly to pigeon-hole The Mavericks in such a manner. ‘What You Do To Me’, featuring stabs of brass and a healthy tinge of latino, sounds like Cuban dance music with a hint of The Jungle Book’s ‘I Wanna Be Like You.’ ‘Stories We Could Tell’ utilises a duet of clanging chords and brass to form an enjoyable 50s rock n roll/blues pastiche while the intro to ‘Dance in the Moonlight’ – a song bisected by some riveting trumpet and accordion soloing – echoes Red Hot Chilli Peppers and subsequently bears a passing melodic resemblance to Shakin’ Stevens’ ‘This Old House.’

A seven song encore begins with Malo’s contemplative, fingerpicked solo interpretation of ‘The Times They Are a-Changing’ before a party breaks out in earnest when a considerable number of audience members take leave of their seats at the opening chords to ‘Dance The Night Away’ – though a tad corny it can’t fail to be charming in this context. The front of the hall is a dance floor for the remainder of the show – there’s a sparkling cover of Chuck Berry’s ‘You Never Can Tell’ and a finale of ‘All You Ever Do is Bring Me Down,’ the group’s highest US charting hit.

It’s nearly a standing ovation by default, then, as The Mavericks conclude a consummate live show. Supplementing the charm of the musical performance, there’s an amiable postscript to the evening as Malo sticks around to shake the hands of people near the front row and McFadden can be spotted in the corridors saying ‘goodbye’ to the departing audience.