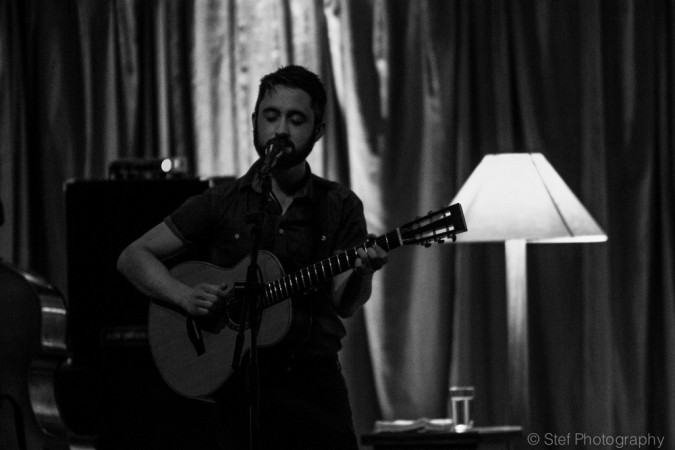 With their new album just a day old, Villagers visited St George’s on the first night of a thirteen date UK tour and the ecclesiastical surroundings proved conducive to the beautifully crafted songs of the Irish indie folksters. While a less is more philosophy has been the approach drawn up by leader and songwriter Conor O’Brien for third release Darling Arithmetic, the addition of a full band setup for this tour sets new songs soaring and provides colour and variation to established favourites.

Beginning life as a series of demos which then evolved into a full album of stripped back tunes, Villagers’ new record is purely a solo effort by O’Brien but tonight he is joined by regular band members on double bass and keyboards along with a new face on drums and the addition of a female harpist. This setup, and O’Brien’s taste for rearrangement, means that few of the songs here sound like their album versions; while such disparity often serves to frustrate, it’s an approach that is totally vindicated this evening.

First case in point is opening song ‘Set The Tiger’s Free’, taken from 2010 debut Becoming a Jackal; slowed down to a guitar picked stroll, the inclusion of harp and female counter-harmonies make it a tastefully subdued reworking. ‘No One To Blame’ is the first of the new songs noticeably benefited by the embellishments of the live setup; within the three way harmonies, harp and a doubling up by the drummer on flugelhorn, its true beauty is revealed.

When the guitar/harp duet of ‘My Lighthouse’ segues without pause into ‘The Soul Serene’, rim shots, double bass fills and droning swirls of synth turn the pleasingly delicate into something substantially pretty. The absence of its pounding piano figure robs ‘Nothing Arrived’ of its usual drive and while it is one of Villagers’ least successful reinterpretations it is somewhat reprieved by effective touches of flugelhorn and O’Brien’s impressively sustained vocals at the song’s coda.

Though Villagers excel at tasteful musicianship, it is the combination of O’Brien’s voice and the venue’s wonderful acoustics that make tonight’s performance so gratifying. Double bass fills are perfectly audible, brushes are enough to make the drums clearly reverberate and O’Brien’s voice floats majestically above the arrangements. It’s a live vocal very nearly indistinguishable from the recordings; soft and supple, it is the falsetto prone voice of a man trying to uplift himself from life’s torment.

Another advantage of the quality level of acoustics is the easy ability to discern every word that O’Brien sings; clearly heard is the personal directness in matters of love and relationships, but also anger and self-acceptance, in the new songs. ‘Hot Scary Summer’ sees O’Brien alluding to his own sexuality although “We got good at pretending/Then pretending got us good”, whether a statement about hiding one’s true orientation or deluding oneself in clinging to doomed romance, retains a poetic ambiguity.

The bearded and slight-framed O’Brien is a shy stage presence and is all appreciative nods and mumbled acknowledgments until late in the show when, before performing ‘Memoir’, he reveals the probable source of his diffidence: “Tonight is our first show of the tour and it’s insanely terrifying”.

In an eighteen song set, Villagers play a three song encore which begins with a beautiful solo performance of ‘Becoming a Jackal’. The full band then returns for a Travis-picked ‘Pieces’ and new track ‘Courage’; a highlight from the new album, the harp and synths turn the intimate into something deftly rousing.

Darling Arithmetic may be all about complicated equations of love, relationships and personal discovery but the adding together of O’Brien’s voice and songs with classy musicianship and a great concert hall makes for a sum total we can surely all agree upon: It’s been an exquisite night of music.