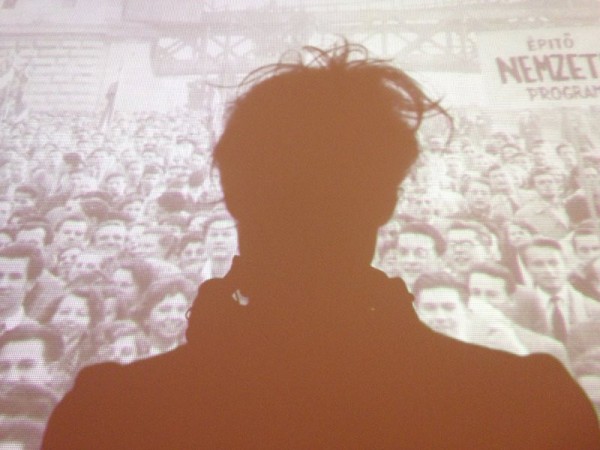 The French Revolution, The Plague, Orson Welles “fucking up his second film” are – as Canadian born theatre producer and playwright Deborah Pearson suggests – all contingent factors on which our individual existences are predicated. A straightforward espousing of Chaos Theory, perhaps, but what is not immediately obvious is how exactly a Hungarian football comedy film from 1956 resulted in both performer and audience arriving here together on this drizzly Thursday evening at Stokes Croft’s Cube Cinema.

In an expertly considered and unravelling narrative, ‘History History History’ uses the personal lens of Pearson’s family history to beautifully explore the infinitesimal decisions and the events and non-events that lead to both the shape and actuality of our lives.

We are introduced to the 1956 film, translating as ‘The Wonder Striker’, a football based political satire about a pen salesman who gets mistaken for legendary Hungarian striker Ferenc Puskas. Developed during the relatively early stages of the Soviet Union’s 45 year post-war occupation of Hungary, the film focuses on themes of censorship and revolution.

Indeed less than two weeks after an uprising saw 400,000 people line the streets of Budapest, the film was due to be premiered at the local Corvin Theatre on 4th November 1956; however on that very day, due to British and American power being diverted in the direction of the Suez Crisis, Soviet troops stormed the capital and fierce fighting broke out on the streets. Rather than a venue for an inaugural film screening, the theatre became a stronghold for the Hungarian resistance.

The show interchanges between a straight subtitled playing of the film and, after Pearson’s revealing her close familial connection to it, context is given for a second voice we hear during some parts of the screening. Pearson also provides an OHP lesson on the production and fate of the film contiguous to Hungary’s changing political landscape and a recorded interview with her grandmother explains further the history of a family fleeing from Soviet oppression in Hungary and seeking refuge in Canada.

As the show’s secrets are gradually revealed, a clever meta-narrative emerges as the subtitles of the film change to make the characters ponder the film’s destiny and reflect on the fate of Pearson’s family. There’s a nice poetic touch when a comparison is drawn between the oppressive censorship of the Soviets and the censorship of “compassion and discretion” when Pearson cuts off her grandmother’s interview to spare her deceased grandfather from criticism. The show also touches on the central theme of Sarah Polley’s wonderful 2012 documentary ‘Stories We Tell’: That total truth, marginally eroded by time and subjectivity, lies absolute somewhere within a myriad of varying personal recollection.

The show’s poignant humanity, its bittersweet reflections on the relentlessness of time and its potent blend of uplifting possibility and heartrending pathos make for an enchanting 90 minute show. With his crediting for dramaturgy, Daniel Kitson’s influence can certainly be felt here and it is of the highest compliment to suggest that Pearson’s touching and highly affecting piece earns the right to be mentioned alongside any of the comedian’s virtuoso one man theatre shows.