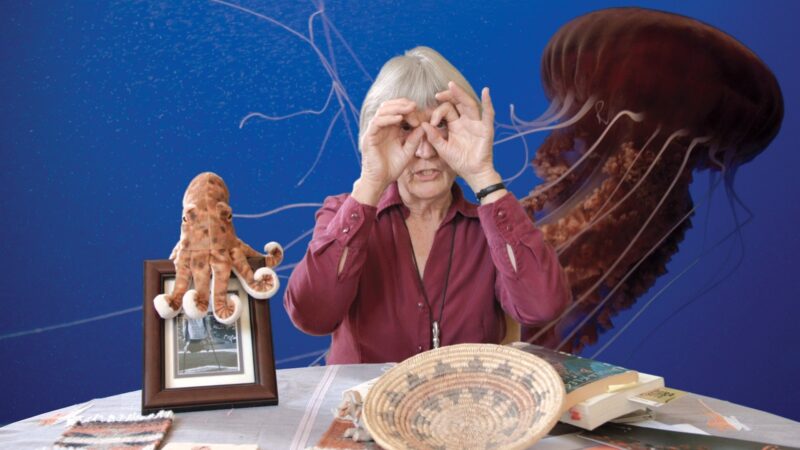 “It’s a testament to the strength of our Mayfest audiences that so many of you have turned up this evening” says festival co-director Kate Yedigaroff in referencing the torrential weather conditions and the as-good-as capacity turn out for tonight’s screening of Fabrizio Terranova’s 2016 film. Indeed, the fact that so many have borne the rain to sit for a documentary study of a figure they are most likely unfamiliar, or only vaguely familiar with – the engagingly eccentric American writer and professor Donna Haraway – aptly highlights the curiosity and sense of discovery that lies at the heart of the Mayfest ethos.

The 80 minute piece merges the simplicity of the verbose and exuberant Haraway speaking directly to camera in her Californian home, as she holds forth on her myriad outlooks and philosophies, with a series of tangential segments that imbue the film with a fun, off-kilter and somewhat spiritual flavour. One moment Haraway is outlining the marriage between Sci-Fi and Philosophy, and how philosophical ideas are often best packaged within fictional works; the next we are treated to a humorous animated sequence and comedy song about the plight of cows and the firearm facilitated avenging of their slaughter.

Subsequent to Haraway discussing her career and referencing her best-known works – including Primate Visions: Gender, Race, and Nature in the World of Modern Science – there’s a charming interlude where her partner Rustin discusses the communication of birds and slows down birdsong to allow us to hear it as other ornithological creatures do. There’s also footage of a younger Haraway coaching her dog around a dog agility trial; it’s hard to overestimate how enjoyable it is to see a sprightly canine glide over hurdles, navigate seesaws and run through tunnel like tubing. Especially when seen in slow motion.

Haraway is no doubt interesting and unique subject matter for a documentary film. With works, and lifestyle choices, covering everything from feminism, environmentalism and the problems of anthropocentrism and heteronormativity (her approach to non-reproductive kinship is a compelling facet), it’s hard to place accurate labels upon her. ‘Eccentric’ is a word that can perhaps be safely applied; bristling with a near manic energy, she is forever close to breaking out into bouts of laughter and, when recounting her unconventional childhood, she amusingly recalls owning 21 dolls, most of which she subjected to the fantasy of “having polio or being in an iron lung.”

Critics of Haraway have pointed to her being “methodologically vague” and when we hear her suggest the need for alternatives to capitalism, for instance, she does have a loquacious and opaque style of language that today is so effective in the online sphere of secular guru-like figures (see Russell Brand or Jordan Peterson). Indeed, Haraway’s fond recollection of her storytelling family and that it was about “words and stories, rather than intellect” betrays a natural poetic sensibility that feels significant. The final segment, which appears to be a reading from an essay about the symbiogenetic joining of human children with monarch butterflies, will be beyond the scope of most people’s understanding.

Whatever the plausible or implausible manifestations of her work, Donna Haraway is a fascinating figure, and thus ripe for an enjoyable documentary subject. This is a fun, freewheeling and imaginatively varied way of getting to know her.