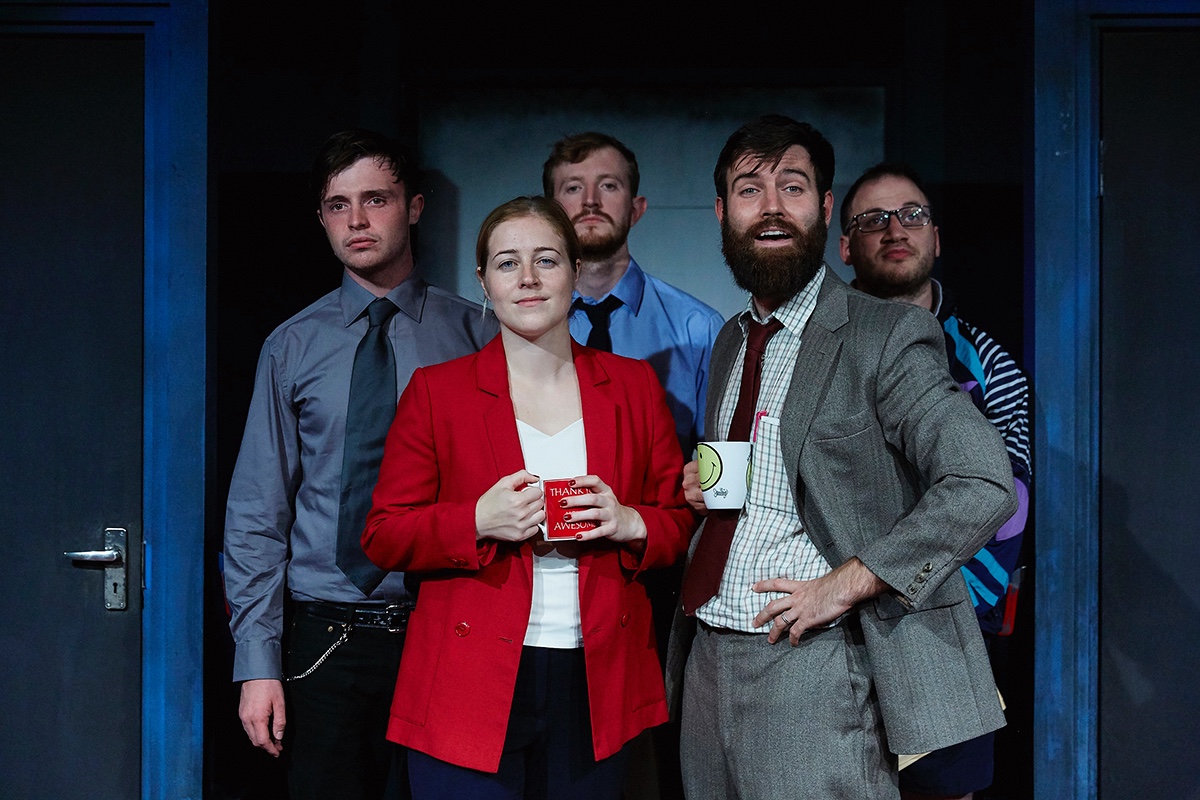 For many the Rolling Stones’ free festival at Altamont (that descended into chaos and death) marked the end of the 60’s. A bloody exclamation point that abruptly concluded the dreamy “flower power” era.

In some respects the ascension of Tony Blair & New Labour after their electoral success in 1997 can be seen through the same prism, as the death knell for an equally aspirational and optimistic generation. The moment where the unlimited and dizzying expectations of a group fuelled by new drugs and new thinking began to flake away like Icarus’ wings, to reveal something far less angelic.

The Wardrobe Ensembles production doesn’t paint the UK in the late 90’s as somewhere on the edge of the precipice but it certainly does hint of the disappointment and disillusion that would come.

Devised by the entire ensemble there is clearly a lot of love and fondness for the period, a fact emphasised throughout the production. From the soundtrack that combines everything from Gina G to Oasis, to the weird fascination with Tamagotchi’s, the 90’s are here in all its bouncy, baggy glory.

After a successful run at the Edinburgh Festival the team return to Bristol with a refined version of the play.

First on stage is the deadpan and utterly hilarious James Newton as the stoic German language assistant Tobias. More robot than man, he delivers cutting witty barbs with Teutonic surgical precision. His accent is particularly convincing, a skill no doubt honed from his time performing in Berlin.

Newton is joined by the bumbling Jesse Meadows as the archetypally idealistic teacher Susan Belltop-Doyle, whose chaotic classes make up for their lack of discipline with inspiration and imagination.

It’s an excellent mix of cartoonish pantomime and satire.

Each of them spend times as teens and teacher at various points, which only emphasises the thin line that divides the staff room from the playground.

A study of the way in which schools are at the whim of transient governments, plugging holes in their electoral support with populist policies rather than taking the longer view on issues, we see how teachers and pupils can be left to twist in the breeze as curriculums and funding swings from year to year.

More fundamentally the play also addresses the trials and tribulations that teachers and pupils face each day as adolescents struggle to find themselves and teachers struggle to guide them through the choppy water.

We see many poignant moments ranging from Tobias consoling the inconsolable Emily as she faces suspension, or when Susan finds solace from thankful pupils reaffirming her belief that her whimsical teaching methods are not without substance.