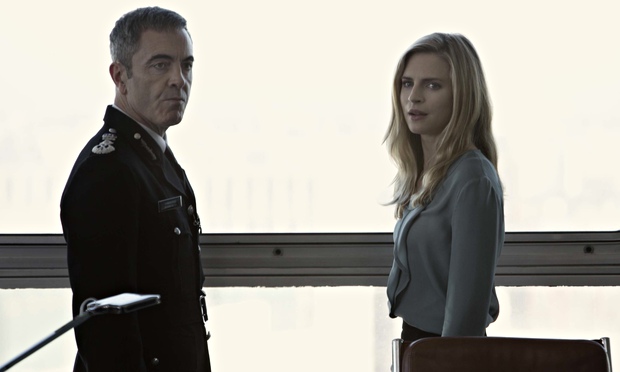 Right, Christmas is over, you’re fed up with your family, your friends and possibly you are too hungover to do anything and you’re so full of Turkey and chocolate that you just want to lie around in your pyjamas and drink your bodyweight in cups of tea. With that in mind, The Fix’s Arran Dutton has put his body on the line, found a bit of inspiration and jogged into the gymnasium of productivity to provide you with the excuse to hibernate in the warm and conjure up some energy to go and fight the world again when you’re feeling much more up to it. In the first of weekly feature, he has brought to you The Weekend Binge and it’s a simple premise: Finding you some wall-to-wall television and film (either on demand TV or on Netflix) that you can watch in a marathon session when you can’t be bothered to do anything else. First up is Channel 4’s Babylon, which, if you play your cards right, can be streamed for one more week. Here goes…

A full-scale riot has broken out in a youth offenders institute and as those at the top in Scotland Yard listen to demands of these mischievous scallies in order to bring an end to the unrest. There’s a simple idea that delivering pizza may lead to the calm and respite needed as they look to negotiate a peaceful ending. So, the offenders put in their topping demands and when they ask for stuffed crusts the powers that be in the Metropolitan Police Service are somewhat aggrieved by the imprisoned taking liberties and a discussion has to be had as to whether this is acceptable or not. For me, this is one of many memorable scenes in Channel 4’s Babylon, which in my opinion is one of the most mischievous, daring and thought provoking comedy dramas produced in the UK in years. Its central story arc revolves around Liz Garvey (Brit Marling), headhunted from Instagram for the role of Head Of Communications at Scotland Yard, who faces the impossible task of generating positive PR amongst the chaos and comedic farcical nature of all that goes on at the headquarters of the capital city’s police force. However, the focus shifts to give multiple perspectives both externally and internally at different levels of the police force and we’re given an insight into the pressures, threats and difficult decisions provoked by those in our modern day society where every turn of events is heavily scrutinised and magnified by the way we consume media and share information.

Channel 4 initially broadcast a feature length pilot episode of Babylon in February 2014, which sparked hype and debate due to its controversial nature and the people involved, notably, Oscar winning director and series co-creator Danny Boyle who directed it and laid the stylistic framework that creates an interesting visual experience for the viewer in the six following episodes that started in November. Throughout the series footage from CCTV cameras, mobile phones and on the body cameras show an alignment with modern times to bring forward the sense that there are eyes everywhere and big brother is watching you. This provides a fascinating contrast when placed intermittently between the sharp cinematic elements found in the majority of scenes.

Of course, there’s nothing without a script and the programme’s fellow co-creators Jesse Armstrong and Sam Bain lead the writing talent for this brilliant series. When collaborating these writers brought us Peep Show, Fresh Meat and the critically acclaimed terrorism satire film Four Lions – as with those the delightful turn of phrase and outrageously spectacular sharp, witty and dark lines of dialogue shine through in their latest work. Armstrong is also the creator of BBC Four’s political satire The Thick Of It, a show that also boasts spellbindgly magnificent dialogue, particularly within characters’ insults and on the beat conversations, and many of the hallmarks of that series can be found in Babylon. Like with The Thick Of It, I found myself sat there guiltily grinning and laughing at the nature of internal discussions within politics and thinking some of these ludicris conversations surely can’t happen before conceding when thinking of behind closed doors conversations I’ve heard in other areas of life. Substitute political parties for the London’s law enforcement HQ and prepare to be horrified; in one scene, the American Liz Garvey and another educated white colleague are discussing the PR strategy after a fatal shooting of a black teenager and pondering whether or not an involved police officer of Turkish descent could be considered as “actually being black” as they consider the option of releasing his details in a move to soften the blow the department will take due to the fact the officer’s white colleague pulled the trigger.

Though the aforementioned scene shows a dark humour it also highlights the fact that political correctness has developed to such complexity that we’re now not often sure whether or not certain things are offensive and the paranoia that surrounds this due to the likes of YouTube, Facebook and Twitter meaning any misjudged comment or reaction can go viral instantaneously. It’s interesting social debate that will hook many of you and the writing cleverly also plays on the impact of social media in many ways, for instance, when a police officer is overheard on the phone speaking to his wife about a bomb threat and within minutes it’s on Sky News after a member of the public’s tweet sparks a frenzy. For the viewer it’s fascinating to see the hurdles that Liz Garvey faces partly because social media; such incidents create dramatic tension and humour in that obstacles are constantly thrown in her direction as she tries to succeed in changing the perception of Scotland Yard, a task that has genuinely become important to her. It’s an interesting juxtaposition too when taking her character’s goal in professional terms and placing it alongside her personal goals and perhaps how far away she is from achieving those as she lives alone in London and feels an isolation due to her professional sacrifice. Some viewers will be able to relate. For me, this central focus on Liz Garvey wonderfully holds the show together as I found myself constantly asking, “what would I do in that situation?” which made me want to continue watching. It was becoming addictive.

Brit Marling, who plays Liz, is big coup for the series after her own stock has risen due to her success as a writer, director and actor in two indie film phenomenon Another Earth and The East, but the sheer complexity and brilliance of this series was obviously difficult to turn down. Marling leads a strong cast with solid performances throughout including that of James Nesbitt, lauded for his role as Tony Hughes in BBC’s The Missing, but is equally as brilliant in Babylon. The pressure his character is under as Police Commissioner leads to another fascinating storyline when it impacts on his personal life and on the whole the writers do a great job by gently breaking the viewer into the personal lives of characters, which comes around mid series after the spectacle of Scotland Yard and its relationship with the public is established and explored. There’s a loose comparison with The Wire coming up now as that series gave viewers the insight and perspectives from a variation of angles in the city of Baltimore (law enforcement, political candidates, low income families, gangs, media, educational systems et al) to create a highly satisfying level of understanding and empathy with characters and an appreciation that nothing is as black and white as it seems. Babylon does this too by showing the viewers behind the curtains of characters that don’t meet others due to the hierarchies within Scotland Yard yet whose lives are affected by the actions of everyone you are seeing on screen. You see the special arms unit, the officers on patrol, those responsible at the top of the tree and the people who try putting positive spin on their actions as well as the external point of view from a rogue corporate filmmaker who is seeing the gritty realism and knowing how it can boost his own career. It all interlinks perfectly an builds to a stunning conclusion that will leave you wanting more. It’s beautifully done and really is a much watch, quite perfect for a post Christmas weekend binge.

Babylon is available to stream for free on 4OD now: channel4.com/programmes/babylon

* Arran Dutton is an independent writer and producer with credits for BBC. To find more about him and his work head to arrandutton.com