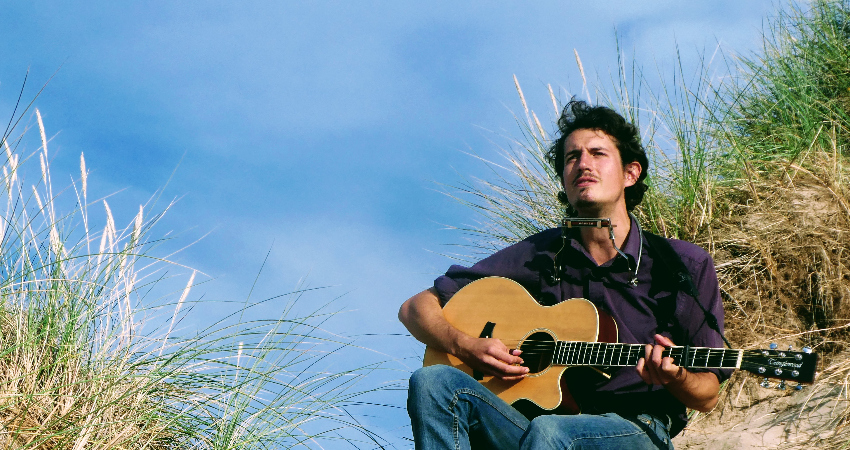 The product of three years spent busking on the streets of Europe – including every country in the European Union – and beyond, David Fisher’s Busking Beyond Borders adroitly captures the beauty, magic and unpredictable thrill of life on the road. In March 2015, the Birmingham-based musician (if the word ‘based’ makes sense for someone of such peripatetic bent) dropped everything and left the UK with little more than a guitar and a bag of clothes. Fisher tells the story of this time in a collection of ten Celtic-tinged folk songs.

Opener ‘Road Scholar’ – which instantly reveals Fisher’s melodic handle on the folk template  – is an artful take on the old adage of travel broadening the mind. In referencing Cecil Rhodes, Fisher sings “I’m not much of an Empire man” and, in rejecting any form of parochialism, he declares that his education is acquired from “going from nation to nation.”

It’s an opening song that, thematically speaking, is something of an outlier in an album that can perhaps be condensed into three mostly sequential themes: The existential preference to travel free from the shackles of 9-5 conformity; the conflict between romantic fulfilment and pursuing the nomadic path; and Fisher’s evoking of his experiences in specific places.

‘People Say’ – its busy fingerpicking style and blasts of harmonica redolent of ‘Don’t Think Twice It’s Alright’ – rejects the notion of “Success is weighed in gold” and declares the World his home. Following track ‘I Do Believe It’s True’ continues on this subject by poetically bemoaning “Happiness set aside for a life” and subtly captures the intoxicating thrill of waking up each day with unknown adventures ahead (“I’ll be happier today than ever before”.)

With its interludes of fiddle, ‘Girl From The Mountain Town’ is perhaps the album’s most Celtic flavoured tune and, in his missing a potential romantic partner, one that sees Fisher most at conflict with his peripatetic calling. This is before an apparent resolution in ‘Living the Dream’ where he relays to the same mountain town girl that his not moving on is asking too much and his choice to travel is not to “find me a wife or to find myself.”

The pensive, fingerpicked ‘The Lofoten Islands’ – named after a picturesque island group off the west coast of Norway – adopts a different view on this tension between travel and romance as Fisher describes the untarnished perfection of a one day tryst (“Though we knew we’d never see each other again, we knew that it was perfect”).

In keeping with the notion of ‘Road Scholar’, the mandolin embellished ‘The Rose of Turaida’ – a 17th century Latvian story about a murdered girl whose grave lies in the grounds of Turaida Castle – is a great example of the esoteric knowledge that one can acquire on the road

Based mainly around the twin accompaniments of guitar and harmonica – with the addition of banjo, mandolin, a backing singer to bolster Fisher’s ability to grasp a traditional folk vocal styling – Busking Beyond Borders has a simple and evocative troubadour feel. The premise of the album is inspiring enough but here Fisher proves that he has the song-writing chops to not merely rely on the enticing backstory from which it blossomed.

Busking Beyond Borders is released on 10th December 2018. For more information visit here.