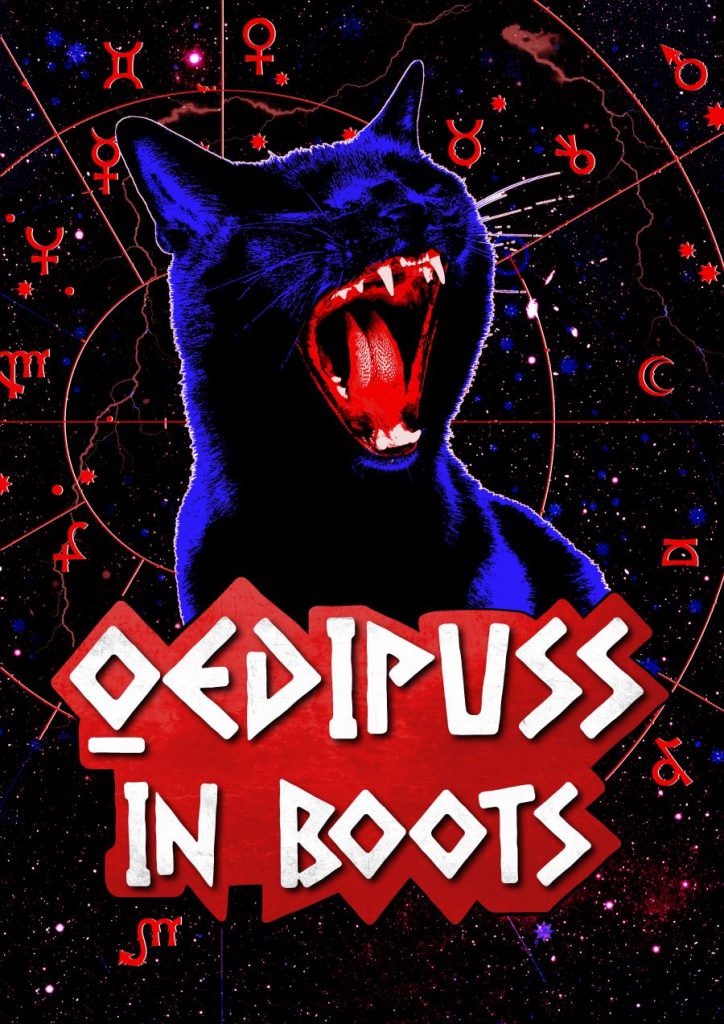 It could only be Christmas at the Wardrobe Theatre.

Returning Oedipuss in Boots to the stage for what is the ensembles eighth-year, the institution that is the Theatres adult pantomime shows no signs of slowing down.

Originally conceived by Chris Collier, Harry Humberstone, James Kent, Andrew Kingston & Matthew Whittle in 2012, and performed that year, this is the second time that the group has combined the odd bedfellows of Greek tragedy and British panto, in their unique surrealist style.

With some tweaks here and there by Director Chris Collier, the play still leans predominantly on the narrative from the ancient mythological text as we follow the story of the unwitting (and witless) assassin Oedipuss as he cuts an unintended parricidal swathe through ancient Thebes before a graphic incestuous demise. The nods to Puss in Boots are subtler but do still pepper the performance.

Combining Python-esque surrealism with a pithy punk sensibility it’s everything one has come to expect of the troupes tried and tested Crimbo formula.

The Python influence really does ring heavy here, given the surreal long pauses and uncomfortable silences, aptly heightened by awkward, distorted faces, twitching to the player’s discomfort as the fourth wall comes tumbling down.

Adam Blake is simply purrfect in the titular role. Dressed in an all body black jump suit, with just his head exposed, he expressively puppets a ginger tabby cat body affixed to his chest, manipulating the paws with rods, with a feline fluency. He adeptly runs the line between farce and expertise. When the moment suits he effortlessly makes you forget about the fact he is just a man with a cat body sewed to him, only to bring that very fact come crashing back into your consciousness in instants of absurdity. His attempts to pick up various items with the clumsy paws are comedic brilliance, but it is the incestuous, bestial sex scene with Andrew Kingston, toward the end of the performance, in all its strobing glory, that steals the show.

Harry Humberstone, as the bombastic bowl hair cut wearing King Laius, Millers wife, head knight and others, is the heartbeat of the performance, providing a limitless energy that helps push forward the show whenever it threatens to dawdle. His deadpan delivery contrasts brilliantly with his other worldly zaniness. Lithely thrusting his manhood in the direction of the audience one minute (something of a Xmas trademark now – see Kirk vs Ming, Goldilock stock and three bears), then silently befuddled at his hand being held by the pussycat the next.

Andrew Kingston as Jocasta, Millers Husband, Irish Horse Knight and others is also first-rate. He excels as the Glaswegian, kilt-wearing Millers husband, especially during his improvised assistance of Blake, when the puss is clumsily cutting a cake.

Jannah Warlow plays Fate, our narrator primarily, whilst also providing the musical backing (written by Kid Carpet) on an impressive array of instruments (sax, bass, guitar and violin) and vocally. Her aristocratic drawl cuts through the chaos and provides a more serious refrain that juxtaposes with the gritty madness that dominates the rest of the time.

The range of accents on show tonight from all the artists is extremely impressive. The whole British range is on display, with the performances so convincing that one has to check the heritage of the players to see if they are in fact natives of those dialects.

Packed as tight as Humberstone’s red pants with Yuletide cheer, this is yet another Christmas cracker from the Wardrobe Theatre.