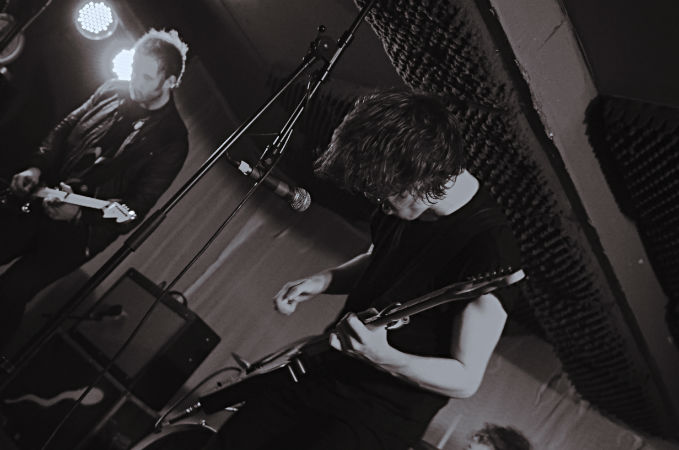 Around this time of year the air is thick with the smell of sulfur, the dark streets ablaze with blinding flashes, a true cacophony of noise, with young scallywags – brimming with the impudence of youth – mischievously conducting proceedings from the shadows. You can’t help but think that the rascally Catfish & The Bottlemen, armed with their collection of incendiary 2-minute indie firecrackers, couldn’t be more at home!

Blown in on the coattails of the largest storm for a generation, their bags packed full of fiery choruses and stadium sized sound, the boys from Llandudno are here primed for the big time and aren’t afraid to tell you about it.

All clad in plain black post-punk attire, they are led by the implausibly titled Van McCann – Miles Kane meets Joey Ramone – and waste no time on introductions deciding instead to dive straight into an extended intro of feedback and swagger that then fuses into current single “Rango”. It’s a vociferous start that is in step with their powerful gut-punch indie style and has McCann violently shaking his Beatle bob Macca-style to the ferocious beat.

On its conclusion we get our first taste of McCann’s scouse charm (half comedian/half front man) as he is struck in the face by a pair of Y-fronts from a girl in the front row (from that point on the offending underwear hang proudly on his mic stand like some kind of carnal totem). Unaffected McCann takes it all in his stride, smiling, and recalls that the girl in question is known to them and in fact paid them each £1 for a snog at an earlier gig. “It’s the best kiss I’ve ever paid for” he cheekily adds.

The child of “free-minded Liverpudlian parents,” McCann was born and spent most of his early years travelling around Australia before moving to Wales. This upbringing has clearly left him with a gregarious/inquisitive nature and he is eager throughout to interact with his audience, even bemoaning the fact that the previous night in Nottingham “no one would talk to us”. It does seem he wants to want to know all the names and stories behind every face in front of him as he implores them to “talk to me Bristol” like some kind of a musical anthropologist. It’s a novel way of covering over tuning sessions and lulls in the performance and complements his gracious/affable demeanor.

“What’s your name?” he continues, stabbing accusingly with his finger at a shadow in the background before engaging the punter in a conversation about dogs and jovially bestiality.

Sex it seems is very much on the tip of their tongues and is clearly an integral part of their raison d’être with much of their imagery incorporating spermatozoa – see the recent video for “Rango” above.

Gigging extensively at present in 18 months they have racked up over 100 gigs and it shows with a crispness to their songs that makes them sound as taut as the actual recordings. It is this exhaustive touring that has helped catch the ear of BBC radio moguls Zane Lowe and Steve Lamacq who have both championed them. 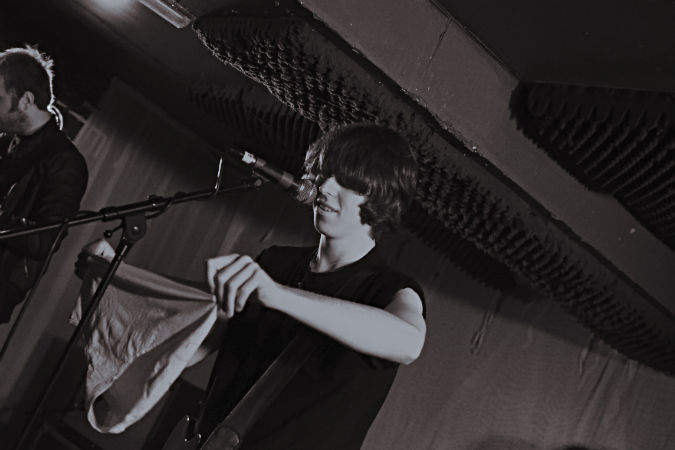 Storming through song after song, “Pacifier” could almost be mistaken as the theme tune to This Life, dripping as it does with enough 90s musical nostalgia that would make an Elastica reunion seem palpably modernist.

Musically, expressions of devotion toward Elvis, Bob Dylan and Van Morrison extend only as far it seems as their dark dress code and McCann’s Christian name for Catfish’s sound has more in common musically with The Walkmen or Foo Fighters than it does the King.

They have indicated previously that they have 3-albums worth of material already and at points you can sense they are dipping into these vaults (see “Kathleen”, “Alabaster” and “Massive Piquet”) to see what works and what doesn’t around their core numbers in preparation of their debut album.

“Homesick” gets the first real recognition of the night and is a 2-minute howitzer that explodes from a strummed intro into its stadium sized chorus. Glasses are raised to salute as lines are sung raucously to the sky like any closing-time classic worth its salt.

The Bottlemen leave it all on the stage with a vibrant style which revolves around McCann as he rocks to and fro, his foot pinned to the back of the stage almost as if he believes to move it may somehow break the spell he holds over the crowd.

“Who are you?? You’re loving it,” probes McCann as he turns to local music legend Big Geoff.  “Is he a local legend?” he follows up as catcalls from the crowd indicate his deity status.  “Did you go to The Strokes when they played here??” he continues to a reply that he did not, but that the best thing he’s ever seen here was Fleet Foxes some years ago. “How does this compare??” McCann asks leadingly. “It doesn’t” replies Geoff, deadpan as ever to hysterical laughter. “I admire your honesty” concludes McCann.

“This is our best song” smiles McCann as he tunes up for “Sidewinder”. “This will blow your balls off,” he says nodding in the direction of Geoff. “Fleet Foxes never had anything like this”. And they do just that.

‘Smash it!!’ howls a face from the darkness and McCann and his darkly clad disciples duly deliver standard closer “Tyrants”. A 5-minute stomp that closes proceedings with an exclamation mark!

Raucous and dangerous for children catch Catfish & The Bottlemen while you can before they explode!!!

Check them out at: www.catfishandthebottlemen.com