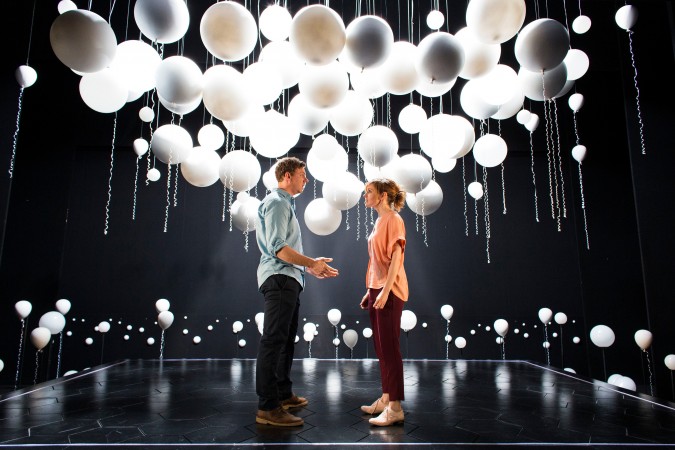 The idea of parallel universes is a potent one, springing forth from the tension between the twin pillars of modern physics, Einstein’s Theory of Relativity and Quantum Mechanics. Only last month, Stephen Hawkings – famous, of course, for appearing in The Simpsons – proclaimed the joyous news that “one day there may well be proof of multiple universes…and in that universe Zayn is still in One Direction.”

All levity aside, playwright Nick Payne’s Constellations arrives at Bristol Old Vic with it’s talons tightly clasped around this idea of a “vast ensemble of parallel universes.” The show, however, seems destined to be a hit in every single hypothetical universe. Royal Court Theatre’s production originally opened in 2012 to outstanding reviews, and has even reached as far as Broadway, where a certain Jake Gyllenhaal played the main lead. 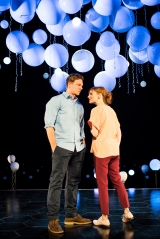 For this tour, Joe Armstrong and Louise Brealey take up the lead roles of Roland and Marianne, the audience taken on a halting, wrenching series of snapshots through their romance. From their first meeting at a barbecue, each moment of their lives together is shown in duplicate, with slight differences in each. At one meeting, for instance, Roland is put off by Marianne’s awkward approaches, whereas in another he is charmed. Thus we are introduced to the multiple universes.

The concept of multiple universes is brought up neatly through Marianne’s work as a theoretical physicist, while the illusion of free will crops up through Roland’s beekeeping and his faltering marriage proposal – he is jealous of bees, as they just ‘are’. This approach that the play takes is challenging, and combined with some equally challenging subjects – including cancer and death – it makes Constellations a highly original and exacting piece. That it pulls it off in some style is quite remarkable.

There are two aspects to the play which make it a success. First and foremost is the dialogue – or duologue – which remains at all times realistic and engaging. From terrible jokes to stuttered silence, the whole time it feels as if the audience is interrupting moments of great personal intimacy. Armstrong and Brealey are to be commended, both for their role-playing, which they grow into as the play continues, and for the physicality of maintaining a dual conversation for the entire piece. Secondly, the stage is quite magical, the backdrop to the action a series of many-sized and glowing balloons. In the sky they resemble stars, while on the ground they are a lit-up cityscape.

In all this is truly a fine piece of work, and Bristol Old Vic has done well to claim the play for this week. Theatre at it’s very best should be innovative, engaging and personal – Constellations triumphs in all three.