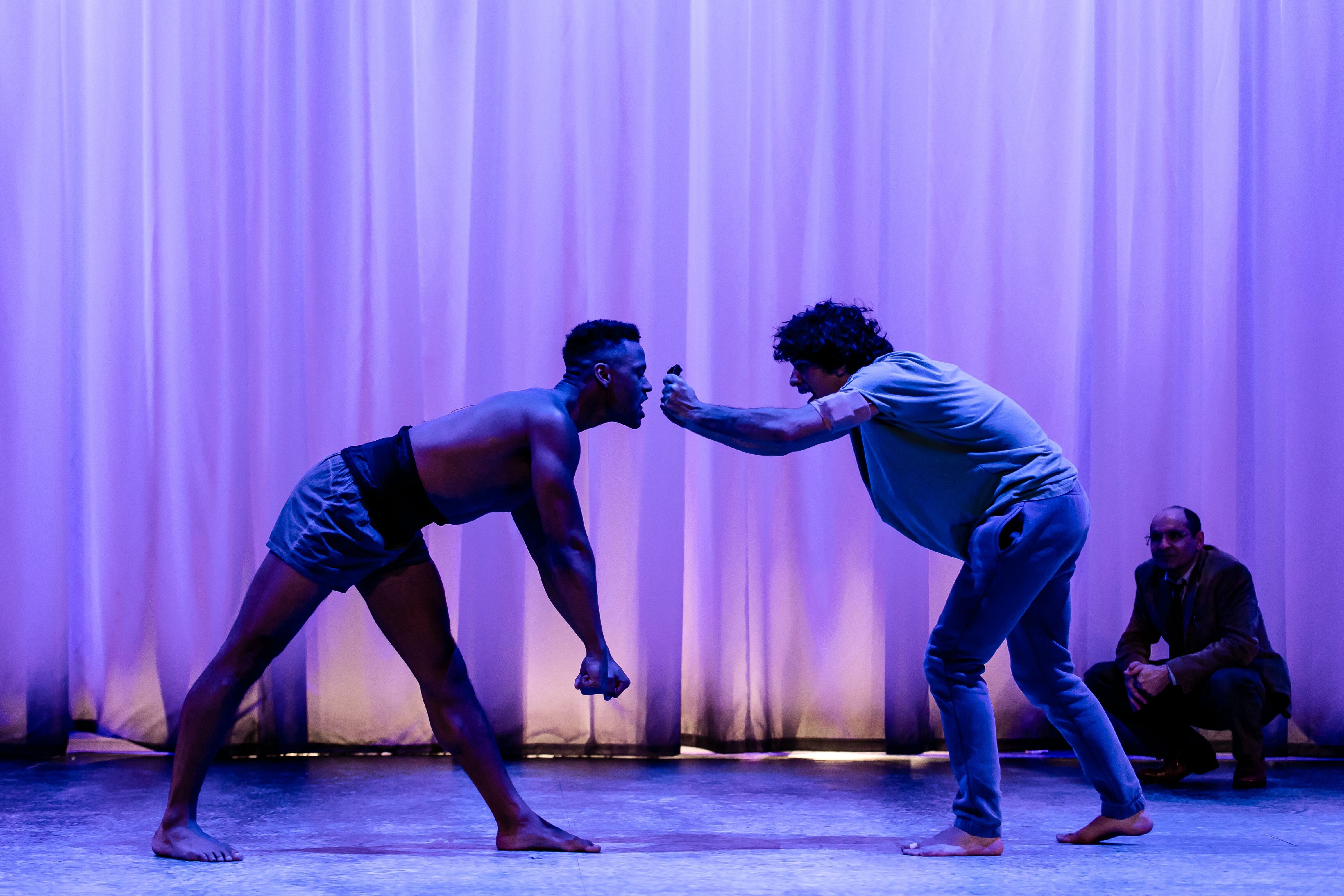 Peter Shaffer’s intense psychodrama – inspired by a bizarre real life crime in a small town near Suffolk– is given a dynamic and assured renewal in this co-production between the English Touring Theatre and Theatre Royal Stratford East. A thematic canter through religious devotion, sexual awaking, passion, mental health and myth, director Ned Bennett’s modern adaptation proves as robust and sleek as the equine creatures at the heart of its plot line.

The story takes shape when revered psychiatrist Martin Dysart (Zubin Varla) is tasked with getting to the psychological depths of exactly why 17 year old Alan Strang (Ethan Kai) blinded 6 horses with a spike at a local stable. The troubled Strang is initially aloof and impenetrable, responding to Dysart’s questions by singing jingles from well-known advertisements (Milky Bar/Martini/Mars Bar). However, the skilled doctor soon begins to unravel clues as to the teenager’s pathology – his unstable upbringing with an atheist father and deeply religious mother, and a near theological obsession with horses – but it’s only after a touch of medical subterfuge that he gets Strang to recount exactly what occurred on the evening of his crimes.

By and large, the set is effectively simple and austere; a white curtain frames the three closed sides of the stage, we hear a subtle foreboding hum and a sense of setting is often provided with a single prop – a television for Strang’s room at the hospital, a vacuum commandeered by Mrs Strang for scenes at the Strang household. However, there’s the tasteful employment of coloured lights, strobing effects, a bed as a trampoline and a thunderous flash of the outline of a horse’s head – which genuinely causes some of the audience to jump in their seats – to give life to both Strang’s and Dysart’s nightmares and neurosis. 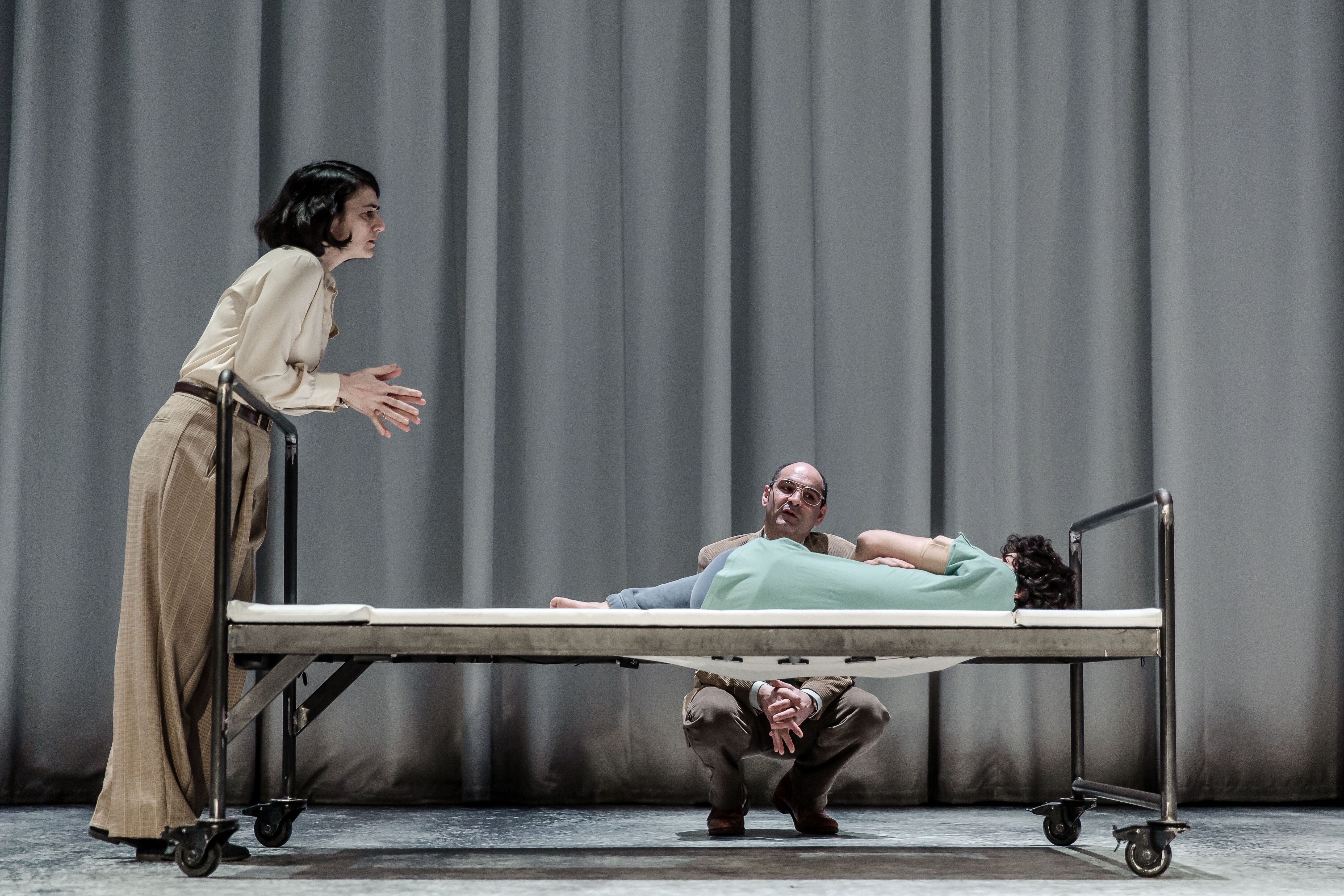 This dichotomy between the sober aesthetic of the play’s real life settings, and the more phantasmagorical representation of its dream sequences and Strang’s profound interactions with horses, is somewhat evocative of Dysart’s core dilemma in treating his young patient; a man embedded in the ennui of a loveless marriage and grey homelife, Dysart escapes through the colour of his own obsession with Greek myth and ponders on whether to cure Strang is merely to impose a dull ordinariness and remove him of his passions – “without worship we shrink”.

There’s a finely balanced dose of humour to leaven the melodrama both in the excellent Verla’s verbose muses (including a well-executed rant about the state of his marriage) as Dysart and a couple of set-pieces that play like a subtle injection of Python; in a scene at the electrical goods store where Strang is employed – and where he consequentially meets the free-spirited Jill – the actors comically nag for various products in daft voices. A later scene at a porn cinema – wherein Strang has an awkward but awakening encounter with his father – is nicely delivered via moustaches for the three female actors and a suggestive dropping of a Kleenex.

The play gets a lot of mileage from the economic use of its eight cast members, five of whom double up as horses. With their muscular torsos it’s actors Ira Mandela Siobhan and Keith Gilmore who facilitate the main equine encounters; they impressively mimic horse-like movements and have the requisite heft for Kai to mount their shoulders in simulation of horseback. Mandela-Siobhan – who plays Nugget, the focal point of Strang’s devotion – deserves special mention, particularly in the riveting scene where Strang’s late night riding reaches orgasmic proportions. Bennett’s contemporary Equus is a sure-footed gallop to theatrical excellence.