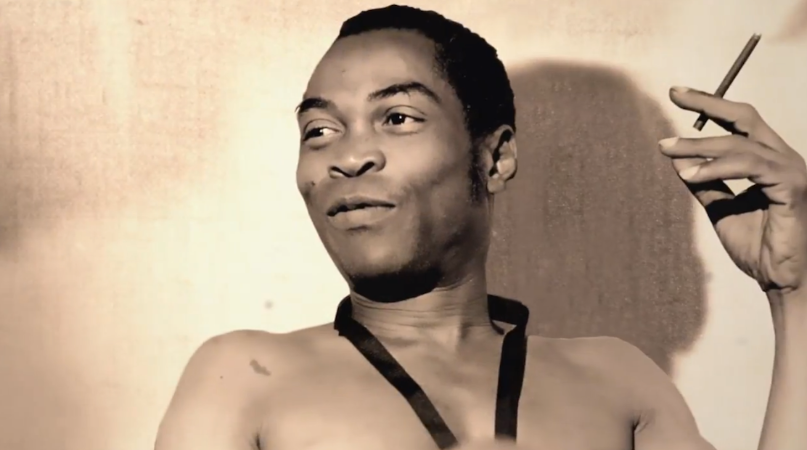 When such a colourful subject, and a life replete with such chaos and debauchery, is placed within the hands of an Oscar winning documentarian, it is hard to foresee the results as being anything short of compelling. Thus, ‘Finding Fela,’ about the life of Afrobeat pioneer Fela Kuti and directed by Alex Gibney (‘Taxi To The Dark Side,’ ‘The Armstrong Lie’) is an intriguing account of an extreme life of musical brilliance, political dissidence and wild hedonism lived within the context of post-colonial Africa. Using rehearsal footage and production meetings from the 2009 Jay Z and Will Smith co-produced Broadway musical ‘Fela!’ as a contemporary framing device, Gibney presents us with a slick 120 minutes of archival clips, including some electrifying concert footage, and talking heads by among others Paul McCartney, Questlove and sons Femi and Seun to get the heart of Kuti’s life and legacy.

Born to a Christian family of considerable influence in Nigeria, Kuti came from a lineage of strong-willed challengers to authority (his mother was a leading feminist activist in the anti-colonial movement) but his musical beginnings were far removed from the expansive grooves of sedition that were to come later. During five years in London where he studied at the Trinity College of Music, the young Kuti developed a keen interest in jazz. Returning to Nigeria in the early ‘60s, Kuti realised that the vibrant African people couldn’t dance to jazz and the result was an imaginative notion to combine the musical form with the high energy and horns of “Highlife” and the American soul music being popularised at the time by James Brown. Further employing a new vamping style and the signature use of “chicken-scratch guitar,” it was during a trip to Ghana in 1967 that Kuti first started calling his music “Afrobeat.”

Kuti as political dissenter and writer of protest material, however, was still a couple of years away. During 10 months in Los Angeles in 1969, Kuti discovered the Black Power movement and the teachings of Malcolm X; consequently his own sense of purpose as a political voice was awoken. With the acquisition of his new sensibilities of social justice, the post Biafran War environment of Nigeria as the 1970s began was an apposite setting within which these new ideals could flourish; a country torn asunder by corruption from oil money and under an oppressive military rule was a perfect context to feed Kuti’s growth as a musical freedom-fighter with his newly named group Africa ’70.

With the success of his records, Kuti exploded as a cultural phenomenon and soon was in possession of an entourage so extensive that he decided to start his own commune; essentially a polygamous haven within which he could live his free, outrageous lifestyle, he named it the Kalakuta Republic. Declaring his Lagos compound as a sovereign nation separate from the rest of the country was perhaps not the wisest move; already irked by his lyrics of anti-authoritarian defiance, the military rulers of Nigeria were angered further and a series of increasingly aggressive police raids began. The situation came to a head in 1976 with the release of “Zombie,” a song criticising the unthinking goose-stepping stooges of the Nigerian military, and a response from government powers that saw the Kalakuta Republic razed to the ground after a brutal attack by a thousand armed soldiers. During the raid, Kuti’s elderly mother was thrown from a second floor window and died later as a result of her injuries. A grieving but incensed Kuti responded with the song ‘Coffin for Head of State’ and physically delivered his mother’s casket to Dodan military barracks in protest.

Gibney vacillates between historical footage and the behind-the-scenes workings of the 2009 Broadway show and it is a technique which is not always successful; these segments, had the show’s run not ended five years hence, would have the unavoidable feel of plugging ‘Fela!’ to prospective ticket buyers. However, it is within one of the production discussions for the musical that an important point regarding Kuti’s character is raised; it is suggested that he must’ve had a real love for people to continually endure all the brutality he did from state powers and the show’s choreographer Bill T Jones offers an alternative suggestion that perhaps it was merely Kuti’s “madness.”

Kuti was clearly an extremely egotistical being and we see enough evidence to suggest that his actions were perhaps fuelled, rather than by a compassionate sense of moral rectitude, by delusions of grandeur that rendered him untouchable in his own eyes. When we learn later in the film that he viewed himself as impervious to death (“I have death in my pouch”), and that he dismissed the ravages of AIDS on his own body as his growing a new skin in some kind of transformative spiritualism, his defiance of those who tried to subjugate him is presented in a possible context of self-serving megalomania. Also, his financial snubbing of his fellow musicians at his 1978 appearance at the Berlin Jazz Festival, led to the dissolution of Africa ‘70 and is telling in regards to his self-centredness. In Kuti’s defence, his acquisition of mass adulation throughout the 1970s would’ve made it hard to remain grounded; the film’s depictions of his traffic stopping walks from his commune to The Shrine nightclub have connotations of a fervour bordering on the religious.

Though a staunch advocate of the somewhat opaque ideology of people power, Kuti’s relationship with women, and therefore around 50% of the people the he was supposedly speaking for, was his least appealing trait. He held views of blatant misogyny (husbands should be able to “kick a woman’s ass” if they so desired) and he embarked upon a non-regulated, loose form of polygamy that saw him marry 27 women on the one year anniversary of the Kalakuta Republic’s destruction. Though an acknowledgement of cultural difference should be afforded, Kuti’s timetabled rotation of myriad sexual partners and the regular infliction upon his young children of violent, early morning confrontations between women vying for his attentions, paint an unsavoury picture. Furthermore, when we hear that Kuti “gave his family affection last” and forbade his children to call him “Daddy,” more questions are raised regarding the depth of his compassion.

‘Finding Fela’ is a riveting portrayal of a charismatic figure who achieved the extremely rare feat of concocting his very own musical genre; in this vein, Kuti’s brilliance needs to be acknowledged. Also, the value of Kuti as a champion of the dispossessed, despite any doubts of ego-driven motivations, should not be underestimated; his value as a political dissenter exists within the hearts and minds of the many oppressed Africans who felt liberated and inspired by the message behind his music. Of additional interest, Gibney’s film is rife with humorous asides: We see footage of Kuti holding a marijuana joint that would dwarf a Louisville Slugger and it is hard to resist a smile at his grinning, gap-toothed relish as to the prospect of ladies night at The Shrine. We also learn of an amusingly bizarre episode where he adopts a Ghanaian magician called ‘Professor Hindu’ as his personal guru. As a larger than life character whose reputation in Africa has gained near mythic status, the task of finding the real Fela Kuti beyond the decadent, womanising, political rabble-rouser is, even for a documentarian of Gibney’s ilk, a near impossible task. His presentation of Kuti’s whirlwind existence, however, is skilled, thorough and as entertaining as his subject was mercurial.

‘Finding Fela’ is showing at The Watershed, Bristol until Thursday 11th September.