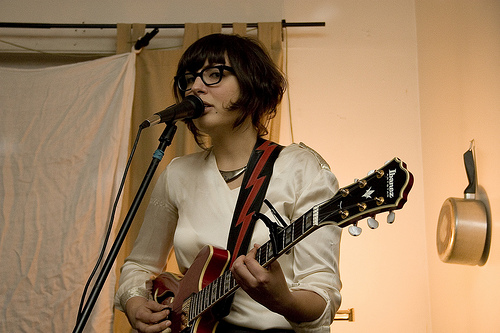 When, after the fey slowness of her opening track, Canadian songstress Gianna Lauren dubs her role at The Canteen as simply to provide “afternoon lullabies during your Sunday roast,” it is as apt a phrase to describe her delicate, half hour set as any this reviewer can conjure. Playing to a moderately quiet room of chattering couples, readers, diners and oblivious heads buried in laptops, the scene is set for a performance of such low-key intimacy as to render Lauren’s music as something akin to barroom muzak. The Sunday afternoon setting at The Canteen provides such a muted, confidential atmosphere that even Lauren herself is mistakenly asked to contribute towards the musician’s collection bucket during the performance from the evening’s first act Wyldest.

To label Lauren’s music as muzak is not to discredit her songs but more to put them within the context of an incidental sound to a semi-aware clientele going about the business of weekend socialising; armed with the modest set up of red Epiphone 335 and a small amplifier, Lauren delivers moments of understated beauty with her soft, smoky vocals backed by a warm, delicate guitar style. ‘Trouble’ features a gently picked ascending bass-note figure that snuggly interweaves with a voice that sounds like a husky, Americanised Isobel Campbell while “Ghosts” is an attractive affair with her catchiest chord changes and a slight melodic redolence of Red Hot Chilli Peppers’ “Universally Speaking.”

“Become What You Can’t Be,” contains soothing vocal work most befitting her previous reference to “lullabies” while Lauren’s very occasional, firm guitar strums reveal a heavily reverbed, doomy growl similar to that of Crybaby, otherwise known as Bristol’s very own Danny Coughlan. Lauren, donning prominent spectacles and a kooky nerd visage, deals with the subdued atmosphere gracefully enough as she regards her hometown of Halifax, Nova Scotia as a “Canadian Bristol” before recounting a “stressful” four days of searching for replacement instruments after her guitar was lost to airline incompetence.

Closing with “Stand Still,” something Lauren jokes, that “most of you are doing very well,” it is a rather apposite conclusion to an unusual gig experience. Lauren, though in possession of both an impressive voice and poetic sensibilities, is sonically not substantial enough to rouse such an audience from its non-paying passivity. However, with tools evidently at her disposal, one is intrigued as to how Lauren would fair with a full band accompaniment and an environment more conducive to elevating her songs beyond the realm of mere lullabies on a Sunday.