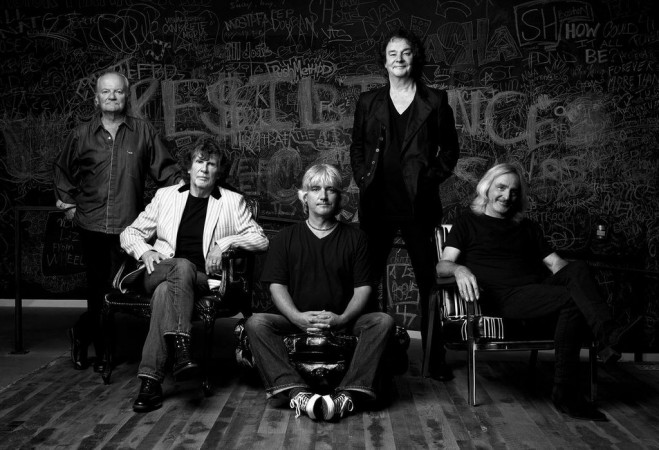 The Zombies first hit the limelight with their 1964 single ‘She’s Not There’, a song which scored the Hertfordshire band a No.2 in the U.S Billboard chart and saw them play a part in the “British Invasion” of the 1960s. They were also responsible for 1968’s Odessey & Oracle, one of the finest albums to have emerged from the psychedelic era. After a break up that lasted 22 years, the band reformed in 1990 and, after different periods of hiatus and reunion, 2015 sees The Zombies now enjoying their longest uninterrupted spell as a group.

Ahead of The Zombies’ appearance at The Fleece this Thursday, we spoke to lead singer Colin Blunstone about new album Still Got That Hunger, the “British Invasion”, songwriting inspiration, the legacy of Odessey & Oracle and an unlikely sampling of their work by one Marshall Mathers.

Still Got That Hunger is of course the first Zombies release since 2011’s Breathe Out, Breath In. Can you tell us what you have been getting up to in the last four years and what were the circumstances surrounding your decision to get back into the studio?

The Zombies have been touring constantly over the last four years. We are very fortunate in that we can work all around the world from the U.S. to the Far East and of course nearer home in Europe and the U.K. From a purely artistic point of view it’s very important to us that we write and record new music and not just rely on the hits of the past and of course new albums are also central to the progression of all bands in that they trigger fresh press and radio promotion that will hopefully contribute towards the profile of the band!

The album is pretty broad in its range of musical styles – for instance ‘Moving On’ has a blues rock vibe, ‘Edge of the Rainbow’ has tinges of soul and gospel, while ‘Chasing The Past’ contains elements of baroque pop that you are perhaps best known for. Is this eclecticism a conscious thing or do you just go into the studio, draw on a number of influences and see what happens?

I think the eclectic nature of the material is a result of having such a wide spectrum of musical interests. This of course influences the new songs that are written and in the end we simply chose the best 10 songs that are available!

With titles such as ‘Moving On’, ‘Chasing The Past’, ‘And We Were Young Again’ and ‘Maybe Tomorrow, the new album sounds slightly caught between looking back and looking forward. Do you think nostalgia becomes more irresistible as one gets older or is there still as much a focus on what lies ahead?

We have always been a band who very much looks forward to new challenges, new ways of doing things and new territories to tour although as one gets older there are of course more past experiences to draw on as inspiration for new songs.

One of the tracks called ‘New York’ recounts your first experience of the USA in 1964 and hanging out with artists such as Ben E King, The Drifters and Patti La Belle – where does the inspiration to write a song based on memories from over 50 years ago come from?

I remember reading someone saying that the inspiration to write new songs comes from “the phone call”….meaning once you know there’s a deadline you certainly hope the inspiration will magically arrive. If it doesn’t then you’re in trouble! I can remember Rod Argent saying that the particular inspiration for the song ‘New York’ came as he was driving his car and he remembered those far off days when The Zombies first went to The States to perform in the Murray The “K”‘s Christmas Show at the Brooklyn Fox, opening on Christmas Day in 1964!

Your US tour at the end of 1964 came when you joined the British Invasion in the wake of scoring a US No.2 hit with ‘She’s Not There’ – did the “invasion” feel like a cohesive movement at the time and was there a shared camaraderie between the British bands?

No I don’t think The British Invasion felt like a cohesive movement at the time. It’s only looking back that one can see that something different and exciting was emerging from musicians. To my mind everything began with The Beatles. They opened the door to the rest of the world and the rest of the British music industry accepted the invitation. Of course there was a special camaraderie when British bands met on the road but there was also a friendly rivalry as well.

“Lost gem” is an over-used phrase but an absolutely fitting one when describing your 1968 album Odessey and Oracle. The album has been enthusiastically championed by the likes of Paul Weller and is always well regarded in Greatest Album of all Time lists, yet when I converse with knowledgeable music fans, it is often a record that has fallen beneath their radar. What do you make of the album’s curious standing as both critically acclaimed and often overlooked?

Odessey and Oracle is a complete and utter mystery to me! Almost completely ignored when it was first released in 1967…without any official promotion or marketing it has gradually become acclaimed as one of the iconic albums of the 60s. Rolling Stone magazine actually named it as one of the best 100 albums of all time and it sells far more today than it ever did when it was first released all those years ago!

Looking back on it in 2015, what relationship do you have with the album now?

I have a strong and permanent relationship with Odessey and Oracle…a warm memory from a long time ago. Whenever and wherever The Zombies play I think the audience will always associate us with this work and expect us to feature songs from the album in our live shows.

Can you tell us about the 2015 incarnation of The Zombies and what audiences should expect when they see you play live?

Ironically the 2015 incarnation has been together for far longer than the original band making it a very tight and exciting unit! We will be playing songs from our brand new album Still Got That Hunger as well as many classic hits and some obscure tracks from the dim and distant past! I like to think our live shows have something musically for everyone!

‘Time of the Season’ was recently sampled by Eminem for his track ‘Rhyme or Reason’ – what do you make of it and how does it feel to have a Zombies classic used in such a way?

I really like Eminem’s track ” Rhyme or Reason” and think in general it’s really exciting when an artist you admire samples or covers one of our tracks!

After making music for such a long time, is there much room for modern influences? Are there any contemporary artists from whom you draw inspiration and whom had an impact on the songs on Still Got That Hunger?

We are all always listening to music, new and old and in a sub-conscious way that music will influence everything that we write and record but The Zombies have never followed trends or been influenced by specific artists… always hoping that in a quite natural way we are making our own new music…music that is unique to us!

The Zombies play at The Fleece this Thursday 3rd December – a few tickets are still remaining. Visit http://thefleece.co.uk/events/the-zombies-special-guests/ for more information