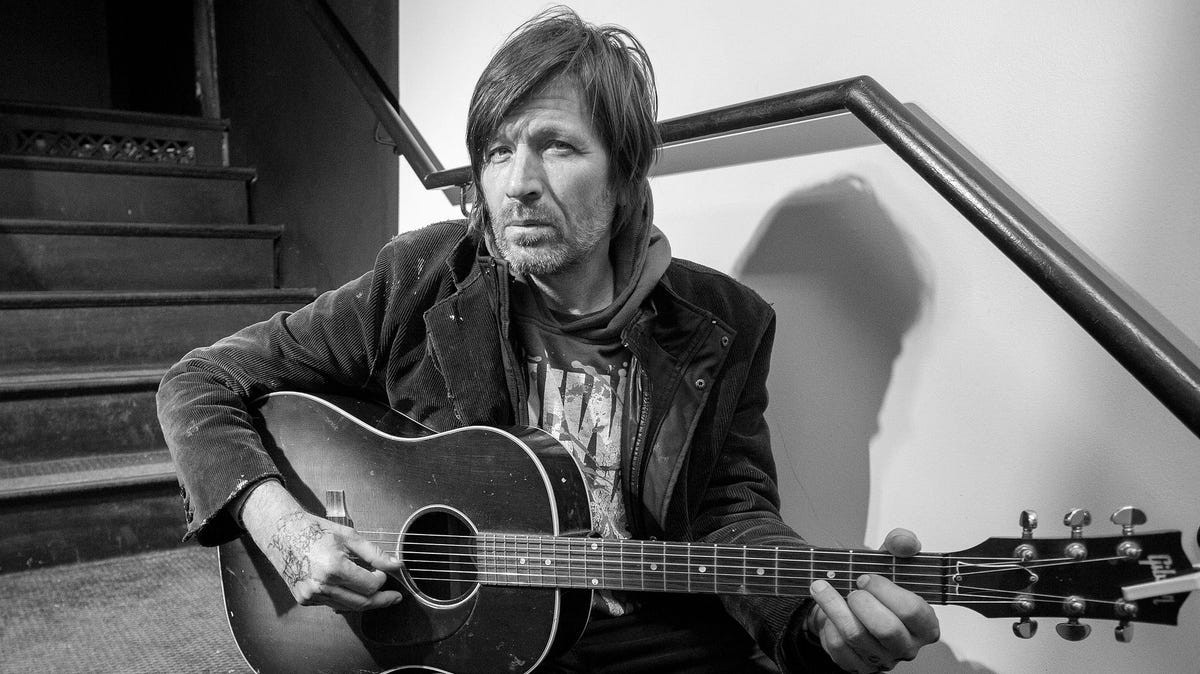 Any debate as to the importance of on stage badinage at a live music performance isn’t a particularly straightforward one. The most enjoyable gig going experiences can be made so by an artist who can utilise a natural charisma to engage an audience with their words between songs. For some acts where the banter is more laboured, you can appreciate the effort being made but largely it’s best just to press on with the tunes. But on occasions where there is close to zero interaction with an audience, it’s hard to avoid the whiff of an artist in the midst of a perfunctory, nondescript outing.

Thus, the current Lemonheads tour celebrates the 30th anniversary of the band’s fifth album It’s A Shame About Ray, released in the summer of ’92. What follows this evening is a relentless sprint to the finish line via a three tier format: An Evan Dando solo acoustic set, the album played in its entirety with a full band and a final set of other material.

A dishevelled looking Dando – adorned in a Run DMC T-Shirt – strolls on to the stage, flips off his bucket hat and strums the intro to ‘The Outdoor Type’. It’s a fine way to start any show but it’s such a gem in the Lemonheads cannon that one yearns for its full band version. ‘Being Around’ – a lyrically fun and tuneful two minute folk-pop ditty – sees Dando humorously execute a long scrape of his guitar strings following the line “Why don’t you get down on your knees and scrub me?”

It’s a moment of humour completely devoid elsewhere in Dando’s on stage disposition. We are six songs in when, following Victoria Williams’ ‘Frying Pan’, he manages to mumble his first “thanks” toward the audience. To his credit, the 55 year old Dando’s honeyed sandpaper vocals are still in fine fettle; there’s a lovely moment where he gently croons ‘Into Your Arms’ in concert with the singing crowd.

“We’ll play the album now” is Dando’s most loquacious outburst of the night as he’s joined on stage by bandmates on bass and drums. Playing the album in sequence, the melodic ‘Confetti’ is the first tune to get the full band treatment and Dando is finally able to flex his lead guitar skills. Dando provides a quick blast of the sharp intro chords to ‘Rudderless’ before segueing into the more laidback strum of ‘It’s A Shame About Ray.’ When he then follows with ‘Rudderless’ in full, it all seems a bit odd; it doesn’t seem like the sort of enduring favourite to warrant Dando’s teasing it out.

The satisfyingly woozy ‘My Drug Buddy’ is further evidence of Dando’s considerable compositional skills and I’d personally forgotten the excellent power-pop of ‘Bit Part’ – a touching, sub-two minute expression of being so enamoured with another human that merely popping up as an occasional cameo in their existence is just fine. Dando’s second non-conversational injection of humour arrives when, during ‘Frank Mills’, he nicely alters the lyric to “He resembles George Harrison of Shed Seven.” It lands with a laughing audience.

The album done, Dando and his bandmates fire on toward the conclusion of a set that is – if mathematics has prevailed – all of thirty tracks. Thirty songs for thirty years. Latter highlights include the catchy three chord motif of ‘Hospital’ and ‘If I Could Talk I Could Tell You’ – punchy, melodically immediate and with a lyrical charm – is quintessential Lemonheads. Also, a cover of John Prine’s ‘The Speed and the Sound of Loneliness’ is devastating Country & Western attuned perfectly to Dando’s plaintive vocals. It’s one of many career examples of Dando’s undoubted flair for interpreting other people’s works.

Dando mumbles another “Thanks” before disappearing for good. One expects to see him punch out on a time clock beside the stage. Of course it could be argued that Dando’s taciturn approach is necessary to achieve such an abundant set list but it’s all felt so routine. Also, there’s been no visible interaction within the band, even in regard to simple eye contact; Dando’s bandmates may as well have been clockwork mannequins. It’s been a serviceable sprint through The Lemonheads’ enjoyable catalogue.