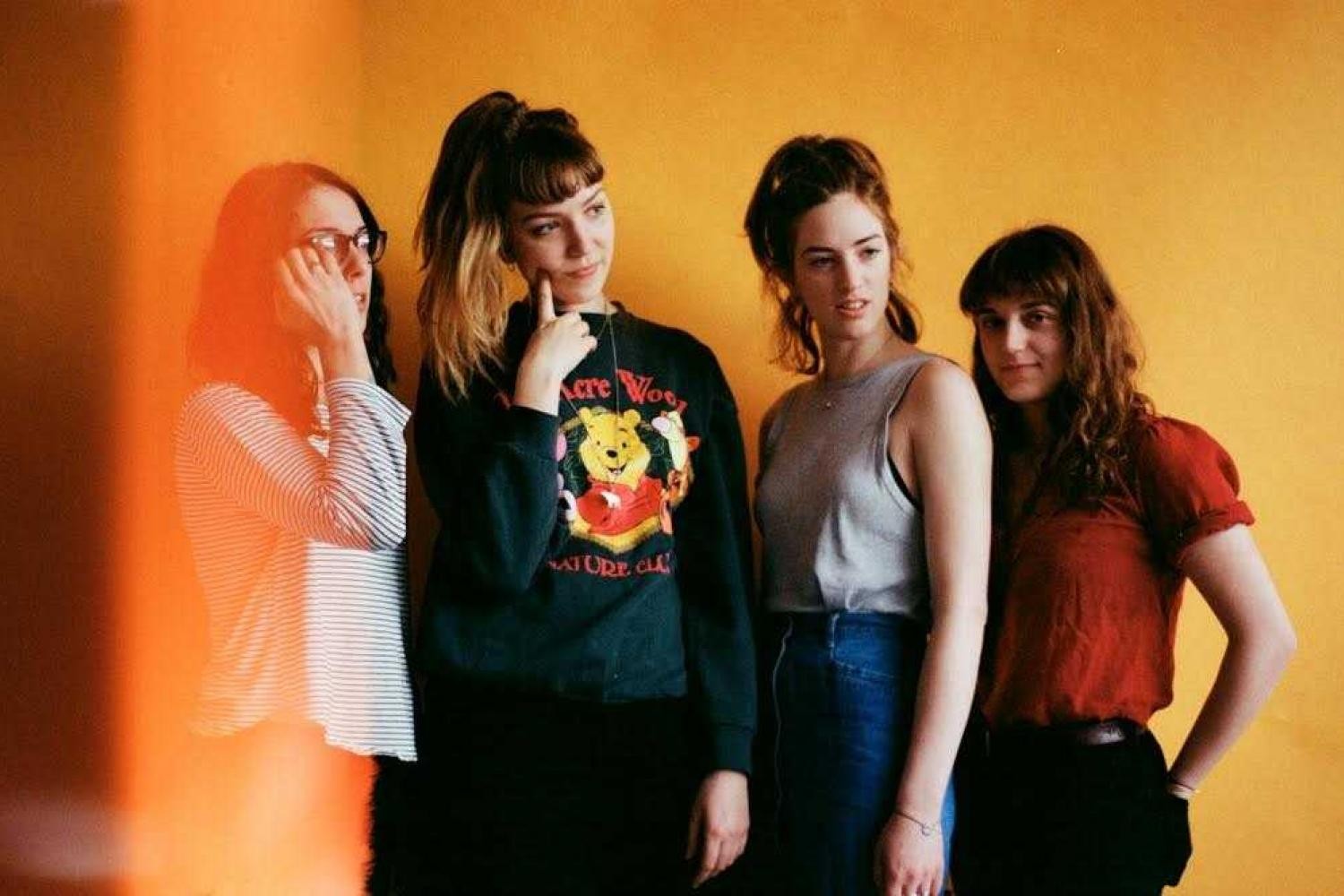 In the before times, late February 2020, it was the London born indie rock four piece who provided The Fix with its penultimate live music experience before a gargantuan spanner got thrown into the global works and the world retreated into lockdown. The fact that tonight’s show lands at the tail end of the band’s first tour since covid arrived highlights the time distorting properties of pandemic upheaval; it’s been two and a half years since that Fleece show but, in the world of the gig circuit performer, it’s barely the day after tomorrow.

Thus, there are familiar elements of tonight’s performance that bring a warming sense of continuity. Exhibit A – after the band march at individual intervals on to the stage – is drummer Fern Ford’s trumpet solo at the coda to opener ‘It’s Easy Then.’ This is followed up with ‘Take A Piece’, perhaps the best example of the poppy diversion of sophomore 2020 record Walking Like We Do; via pre-programmed keyboards and a hooky chorus, singer/guitarist Jules Jackson jams with bass/keyboardist Celia Archer at centre stage before the former cups her ear in encouragement of an audience sing along.

‘Don’t Think’ is perhaps the first moment that fully casts light on the band’s live appeal; the persistent three and four part harmonies sound crisp and clear, and in perfect concert with the instrumentation. Jackson’s beefy guitar sound in soloing toward the song’s end is further evidence of the group’s knack of producing reliably satisfying sonics in the live forum.

Jackson and Archer’s quirky flute duet at the intro to ‘Barcelona’ remains a set feature before Jackson introduces “an oldie” in the form of ‘Cupid.’ The crowd instantly singing along to the first verse is testament to the song’s status as a favourite and, with its quiet/loud dynamics and surging momentum shifts, it could well be their best tune. Jackson suggests “you’re beautiful” in acknowledging the audience and appears to be malting as she holds up a discarded strand from her sizeable sequined feather white top.

Jackson informs us that she had a baby last year and “this next song is about how that feels.” Thus, the folk rock of ‘2 Lines’ – the first we hear of four songs from upcoming third album Here Is Everything – features a lyric that nicely captures the subtle disorientation of realising that a new life grows inside you: “Nothing’s changed but nothing feels the same.” Another new one ‘Wide Eyes’ – which retains the pop tinged rock of Walking… – sees guitarist Soph Nathan down her instrument and squeeze past Archer to vamp some keyboards, before the stage breaks out into a whirlpool of light courtesy of twin mirrorballs.

‘Formidable’ – one of a quartet of tunes from the band’s Mercury Prize nominated debut Love in the 4th Dimension – arrives in slightly altered form. Promising us “something cute,” Jackson, Archer and Nathan deliver an acapella intro before the song fleshes out into a full band salvo. The only moment where things manifestly go awry this evening is when Nathan’s guitar levels plunge way too low in attempting to execute the looping riffs during ‘Sucker’.

Another familiar touch arrives in the band’s revisiting their cover version of Fatboy Slim’s ‘Praise You.’ With Jackson explaining how an effects pedal for executing the reverbed vocal sustain on the held “should” lyric got lost in Spain recently, she implores the audience to fulfil that role on her behalf. Archer hammers out the intoxicating repetition of the keyboard riff while Jackson changes the lyric to “I have to celebrate you, Cardiff”. The crowd duly acquiesce with Archers’ previous instruction to dance up a storm.

Though three tracks from the end, the night reaches its apex with ‘Bonfire.’ Jackson, with security staff hovering close, straddles the railings between stage and audience, and cajoles the crowd  to crouch down en mass during the song’s hushed momentum building interlude. The crowd then leaps up from their crouched stance when the song explodes back into its chorus and Jackson enthusiastically cheerleads from the railings.

The Big Moon have distorted time in the best way possible. It’s like they’ve never been away.