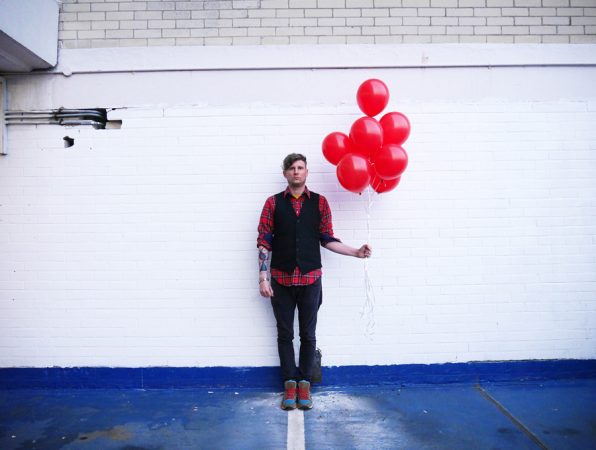 A simple but affecting two man show, Live Before You Die emotional resonates beyond its limited stature and serves as a powerful commentary on friendship, mental illness, the healing power of art and – despite the challenges thrown at us – enjoying life in the moment. A true account focusing on writer/performer Byron Vincent’s struggles with bi-polar disorder and his life-depending relationship with project manager best pal Dave McGinn, it’s a 65 minute performance this is in turns funny, surreal, nihilistic and heart-warming.

The show combines straightforward storytelling, florid badinage, video clips and photos; it is part travelogue, part surrealist comedy show and occasionally has the slideshow presentation vibe of a Dave Gorman project. The story resumes after context is given for Vincent’s mental health issues and a suicide attempt that, almost perversely, became the inspiration for this show. At McGinn’s suggestion – and with a view to creating a documentary account of their journey – the two friends partake in a rather literal pursuit of happiness as they take a 2,000 mile trip across the US, speaking to “happiness experts” such as neuroscientists, psychologists and academics.

As we learn of a cynical and nihilistic Vincent’s continual failure to engage with the supposedly helpful ideas provided, the show’s obvious leaning towards comedy – there’s a sense of the absurd at its underbelly and a penchant for comedic turns of phrase – makes his clearly precarious situation not only palatable but enjoyable, even: at various points Vincent is dressed as a rat and in a helmet adorned with twin egg cups and he rejects any romanticisation of mental illness by describing a particularly bleak period as “a holocaust of diazepam and Frazzles.” Watership Down, meanwhile, is described as essentially “a two and a half hour bunny snuff movie.”

It needn’t be a paradox for such serious subject matter to treated so humorously – helping to deal with sadness and difficulty is of course a key function of comedy – but the show wouldn’t work if it persisted in a purely jocular vein. There are gear shifts and flashes of tenderness that render Vincent’s extreme situation with the requisite poignancy; particularly, there’s a powerful pre-recorded moment of Dave at breaking point beneath the burden of worry and responsibility for his best friend.

The show is essentially Vincent utilising art in an attempt to fix himself and its underlying theme is the tritely obvious but so easily misappropriated call to enjoy existence while we’ve got it. Here’s a piece of work that both heals and entertains.