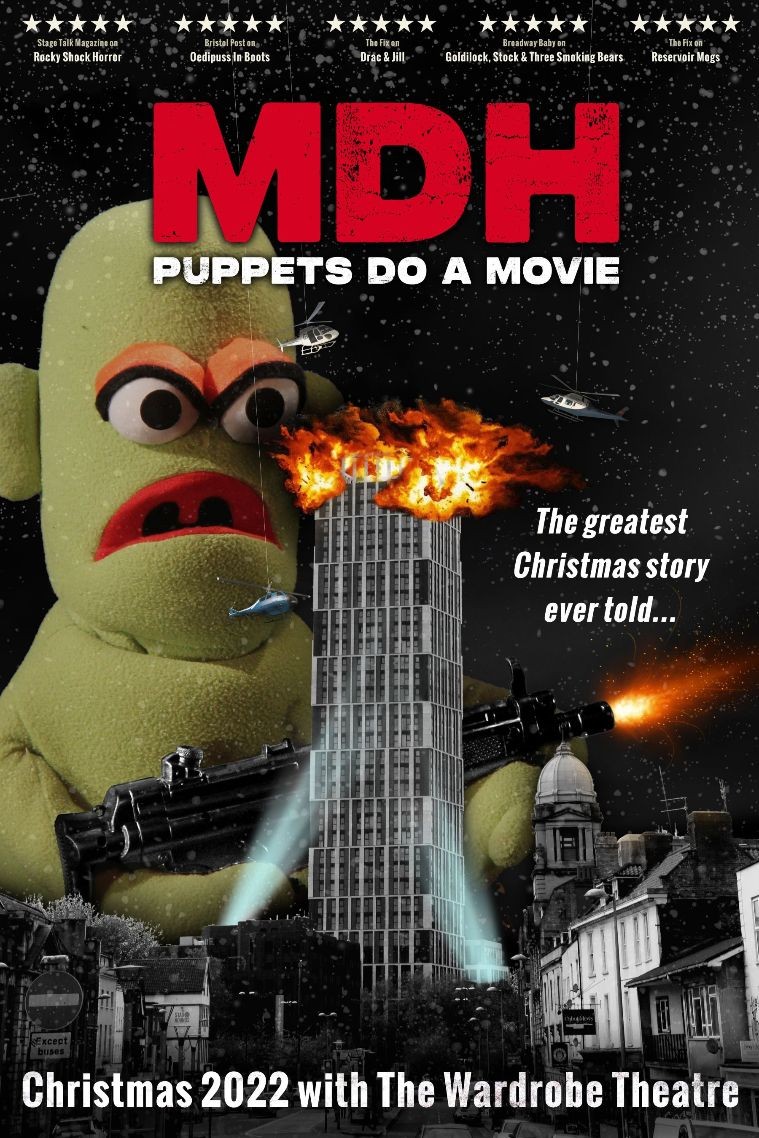 When The Wardrobe Theatre decided to resurrect perhaps the most celebrated of their impressive end of year comedy mashup shows (past shows including Se7en Dwarfs, Oedipuss in Boots and Drac & Jill), the speed of ticket sales for this year’s run was clear evidence of how beloved a show it is. MDH – changed from its former title Muppits Die Hard due to copyright concerns – has a lengthy run until 22nd January 2023 but, nonetheless, scant few tickets remain. Tonight’s performance – funny, dynamic and featuring masterclass performances – serves as the obvious explanation.

Spoiling the Nakatomi festivities, a group of armed goons led by Hans Gruber (played by Harry Humberstone) start firing their weapons and make demands that ultimately serve as a smokescreen to conceal the fact that “exceptional thief” Gruber has his eye on the $640 million in untraceable bearer bonds in the building’s vault. Humberstone – whose recently injured leg caused the production to halt rehearsals and preview shows over the last few weeks – is exceptional in his non-puppet portrayal of Gruber; his caricature of Alan Rickman’s attempt at a German accent never fails to draws laughs, be it in his droll pronunciation of Nakatomi boss “Mr Takagi” or his casting McClane as a “party-pooper.”

Humberstone’s still manifest injury is actually worked very effectively into the performance; the moment where he sings the words “tap, tap, tap” instead of a presumed tap-dancing spot, has the ingenious flavour of Monty Python using coconuts to capture the sound of galloping horses.

A show with an established and familiar narrative, and that utilises the dialogue of the original movie script with perhaps a surprising regularity, will rise and fall on the back of its performers. While Humberstone steals the show, he has the dynamic support of Andrew Kingston and Heron. Kingston nails the voice of Kermit The Frog and effectively captures the New York twang in the lead role as John McClane. Heron, meanwhile, is consistently effective as Miss Piggy and brilliantly captures the hyper, cocaine-induced braggadocio of the Ellis character, represented here as Gonzo (who makes, let’s say, recreational use of his large snout.)

There is much here to enthral and entertain; faulty elevator doors and the quick interludes of ‘Kiss From A Rose’ at every mention of “electromagnetic seal” are on brand, absurdist touches for The Wardrobe Theatre; there are a number of sharp musical interludes composed by Kid Carpet; a scene that takes the piss out of Hollywood shootouts hits the mark, and the flirtatious lampooning of Holly/Miss Piggie’s list of hostage requests for Gruber could be the show’s standout scene.

Finally, the choice to lean into the copyright drama surrounding the show’s title change is extremely well done; in faithful echoes of the real-life format of The Muppet Show, Kermit appears in a series of subplot interludes as he investigates the presence of a mole within the show’s production who is letting slip Intellectual Property information to Disney.

This is a show that never wavers or strays for a moment from being enjoyable, humorous and brilliantly performed. Among a fine list of past end of year delights, it would be difficult to argue that this isn’t The Wardrobe Theatre’s finest yet.