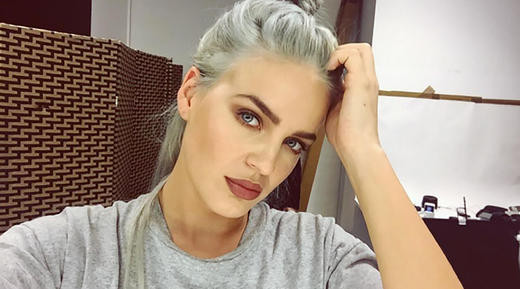 Her vocals previously appearing all over Rudimental’s 2015 album We The Generation, Essex gal Anne-Marie’s search for solo stardom continues with this latest single. A former world champion at Shotokan Karate (genuinely), Anne Marie describes herself as a “singer and ninja” and her binary career path was set on course when, as a mere child, she stumbled upon an obscure Japanese martial arts film where a teenage Des O’ Connor single-handedly takes on a group of terrorists aboard a cruise ship.

The lyrics deal with the 25 year old singer being on the wrong side of infidelity and bearing her considerable ass kicking credentials in mind, the philandering object of Anne-Marie’s ire better watch out. In the video, the heartbreaker in question is a fella called Romeo; however, his standing as lothario is somewhat compromised by his crap choice of Hawaiian shirts and ill-advised short trouser and no sock combo. We see Anne-Marie walk into a weirdly decorated church that looks like a cross between the video to Madonna’s ‘Like a Prayer’ and 80s sci-fi classic Tron. Plus there are passionate smooching scenes that are frankly some of the most inappropriate acts to take place inside a house of worship not involving the unfortunate rogering of an altar boy.

Taking time out from busy collaborations with Walthamstow based feminist groups in his tireless championing of gender equality, the London born rapper returns with this celebration of females with corpulent buttocks. Hilariously utilising the idea of a faux workout DVD and QVC style TV channel called Wobblecam, the video is a 2 Live Crew-esque showcase for the female derriere. We see scantily clad, amply bottomed lady things showing off the magnitude of their rear ends by squatting, bouncing up and down on gym balls and partaking in a bit of hula-hoop action.

A twelve year old with crusty bedsheets trapped inside the body of a 31 year old man, Bizzle struts around the beach like a modern day Priapus, bending down to booty height and offering up nods of approval. “She got the wobble, wob-wob, wobbling” the chorus repeats several times but, just when you think Bizzle is somewhat lacking in lyrical nous, he throws in the curveball of an Arsene Wenger reference. The link may not be obvious but, contrary to many people’s intuitions, the Arsenal manager has a bottom “like two apples in a sandwich bag” and is widely known as the “plumpest arse in football.”

Originally appearing as the final track on Paul McCartney and Wings’ much lauded 1973 album Band On The Run, it’s a sure case of too many cocks spoiling the breath as ‘Nineteen Hundred and Eighty Five’ is given a 2016 update that provides very little. Electronic DJs and producers Timo Maas and James Teej offer up some electro atmospherics and alternative drum rhythms but the song’s enticing piano figure is sadly conspicuous by its absence.

Actually a fine, fine track and one very much underrated amongst the formidable canon of Paul McCartney songs, much of the original vocal remains here but there’s the addition of a curious interlude where McCartney’s erratic moans increase into some fairly unhinged shouting – presumably fuelled by memories of his 2008 divorce trial and the £24.3 million payoff to rapacious Geordie Heather Mills.

It’s not all bad though, we do get the added bonus of a bland video with loads of television sets like something out of the film Sliver and a woman with a see-through carrier bag wrapped around her chest dancing around with a bloke whose haircut is doing its best impression of a mushroom.