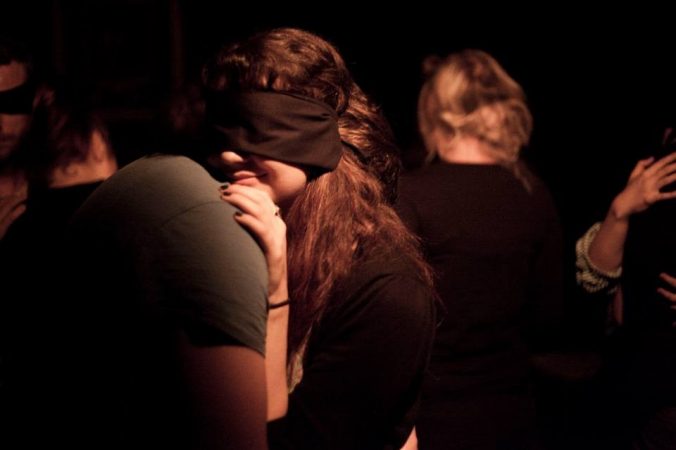 The last Verity Standen piece I encountered was Symphony, shown initially at Theaster Gate’s Sanctum and then subsequently as part of Mayfest. The Bristol-based composer and performer invited lone individuals to sit and experience a private performance, fifteen minutes of being sung to by an unknown pair located unseen behind the listener, so close that their breathing was audible. It left me spiralling, barely able to walk and certainly unable to leave any messages in the visitors’ book.

Hug presents a similar intimacy, although instead of a private performance about a dozen audience members are led to a room and blindfolded. Singers emerge gradually, one per person, producing beautiful melodies and eventually embracing each audience member. By embrace I mean a full-on, lengthy hug. This means ten minutes or so in an incredibly personal hold, to the point where you are resting your heads on each other’s shoulders and can feel each other’s heartbeat.

It is difficult to say anything beyond this, such was the sensation of being held and sung to. It is incredibly rare to have such a long, intimate and non-sexualised embrace – for many it may be the first since infancy. The result is almost overwhelming, and left more than one audience member in tears afterwards. At one point, before being hugged, the awesome wall of harmonised sound around me made it almost unbearable not being touched.

Being blindfolded is key to the whole thing. It does not matter who is holding you, and being unable to see removes much of the potential awkwardness around hugging a stranger. Standen has produced yet another startling piece of musical theatre, made even better by its use of local community choirs. In short this is exactly what art should be – beautiful, ethereal, and promoting unpredictable connections to those around us.