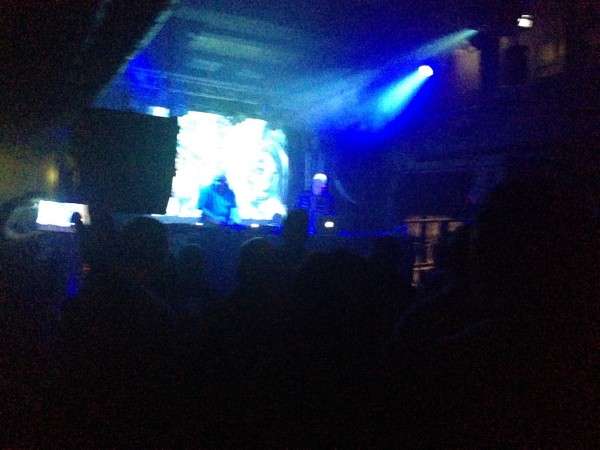 Armed with their 13th album, Moonbuilding 2703 AD, The Orb (Alex Paterson & Thomas Fehlmann) return to Bristol to prove that age is no obstacle for one of British dances’ pioneering acts.

Following several collaborative albums featuring the likes of Lee “Scratch” Perry, Youth and David Gilmour, the ambient dance legends are really firing on all cylinders at the moment.

Backed by a visual show that combines images snatched straight from George Orwell’s mind, it’s a full blooded show, well as full blooded as something this spacious can be.

Whilst many will have baulked at the rather steep £25 required to gain entry tonight, it’s obvious from the wise faces in the crowd, that the rave generation are alive and well and still willing to don their hoodies when the mood takes them.

Alex Paterson is certainly in dancing mood as he slides around on his heels, whilst his turntables spin in a set that still boasts classics like ‘Pink Fluffy Clouds’ & songs from the current album.

The musical interaction between the two is as unique as ever. With snippets of all manner of musical references thrown in (everything from jazz to historical speeches). It’s all mixed in an admirably ramshackle manner, something of a breath of fresh air from the often overly slick production of many other large electronic acts – giving a truly live feel.

As fresh and intuitive as ever The Orb remain true pioneers of ambience.