Considering the success of last week’s show with Cambridge Footlights and the Oxford Revue, it is no surprise that The Wardrobe Theatre is full for Bristol Revunions’ latest offering. A week-long residency in the theatre – one of Bristol’s hidden gems, which could easily double as a creepy room for a Jonathan Creek locked door mystery murder – has seen them perform alongside Twins and Sam & Tom. Tonight it is the turn of character comedians Lolly Adefope and Mat Ewins, and it is natural in a way that these two professional comedians should overshadow the student Revunions.

Adefope constructs an “open mic community friendship night”, sponsored by a depressing alcoholic drink, inviting her own embodied characters onto the stage. The nervous Brummie Horald reflects on a “long life of despair and regret” in passing out a message to his estranged son John Legend. Next is a trustafarian political activist, conspiracy theorist comedian and who rails against the Ebola in commuters trousers and the pig in police officers Full English Breakfasts. Gemma, one of those achingly dull office workers who insists that they are “mad, I am” tells the audience she has a “sixth-sense” with regards to her own crippling and yet blasé loneliness. Adefope’s characters are clever and sharp, and with a little honing could work wonders. 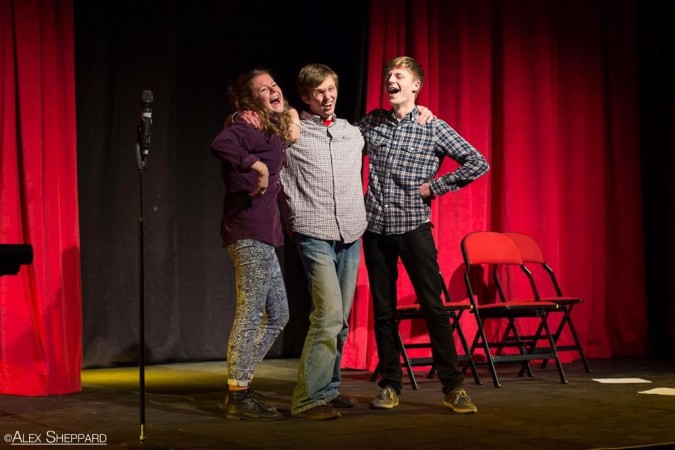 Highlight of the event, however, is the profanity-littered set of Mat Ewins – arriving panting on stage, he informs the crowd that “I just did a gig in Totterdown. It was shit, so don’t you be cunts as well”. His scattergun characters are red hot, particularly that of a fanatic cyclist. His punk poetry is well-observed, including verses on a man disastrously ordering a Thai Bride. A three-word poem about a poltergeist in an earthquake is very good, as is his acerbic critique of Biology at UWE – “they just stare at dogs”. Best of all, however, is his Henry VIII impression, splicing him with a 70s comedian to tell 16th Century mother-in-law jokes. When he saw Anne-of-Cleves’ portrait, he thought “I’d tap that”. High energy and momentum make Ewins’ madcap offerings a delight.

Sandwiched in-between these two is the Bristol Revunions, whose material is as witty as ever and clearly follows in the Footlights tradition. Louis Dawson-Jones does a cracking impression of Professor Brian Cox as a waiter, and there is a fine piece about a cooking show where Jesus Christ gouges out half his own stomach to provide Julie Andrews with a meal. A Sims re-enactment is pleasing for the 90s child in everyone, and the ghosts of Monty Python and the Two Ronnies are apparent in a sketch about a toast shop. A History Channel look behind great speeches reveals conspiracy theories about the Iron Lady Margaret Thatcher, Winston Churchill and JF Kennedy. All very fine ideas then, only lacking the polished touch of performance. It is telling that the best moments come from Ben Gosling, the best actor of the troupe, while others such as Jimmy Graham could be excellent comedic artists with a little more refinement and confidence in their performances.