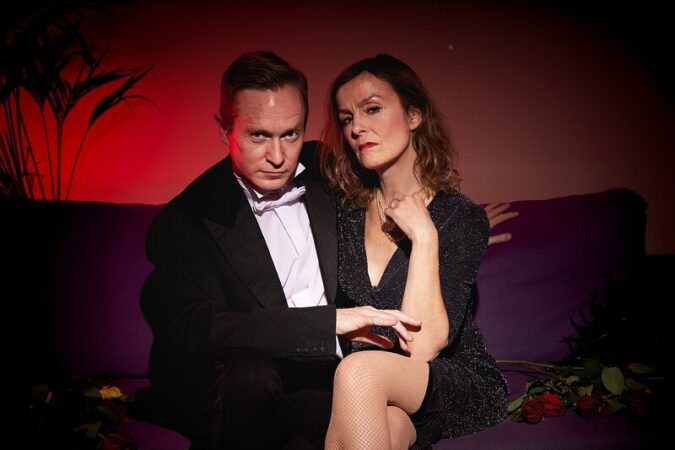 Written in far-off 1981 in the early throes of Thatcherism, ‘Decadence’ is Steven Berkoff’s (British theatre’s senex terrible, darlings) savage takedown of British class attitudes and 1980s excess. Given that the yuppie phenomenon and associated materialistic, monetary nastiness didn’t get going until a few years later, one has to applaud Berkoff’s prescience in nailing the political and economic disparity emerging in British society, and their subsequently deeply unpleasant effects on the country.

New outfit Misplaced Theatre’s choice in staging this particular piece is, on reflection, also deeply prescient given the strong sense of déjà vu that we are currently experiencing at the moment. What with heightening Cold War tensions, a corrupt and self-serving Conservative government, outrageous inequality, rising costs of living and the general sense of collapsing civilization, it is refreshing to see a brave and accomplished attempt to satirize these currents swirling around us.

The play is based around two couples, Steve and Helen, and Sybil and Les, all played by Amy Tanner and Ciaran Corsar, who between them represent the ugliest aspects of the British class system, both upper and working class. From the off, we are subjected to Berkoff’s fluid and lyrical writing as the characters essentially perform rhyming monologues to us and each other, peppered with rich and disgustingly enjoyable fruity language.

Typical of Berkoff, there are precious few taboos that remain unbroken as our gruesome pairs demonstrate their contempt for each other and for society generally when they allow us into their world and their mindset. Sexual abuse, gluttony, homophobia, racism (both casual and deep-rooted), and misogyny all make an unwelcome appearance as the affairs both couples indulge in are played out to set the scene for the class warfare going on. ‘Decadence’ is, after all, the name of the game here, and it is ably invoked as every kind of pleasure is indulged in by both couples and served up for our judgment, and (Berkoff would no doubt hope) our whole-hearted condemnation.

Tanner and Corsar both shine in their respective roles as Helen/Sybil and Steve /Les, with a great deal of depth brought to what could be thankless and unsympathetic roles. In a strong array of direct pieces to the audience, Helen’s darkly hilarious and eroticized fox-hunt, allowing us insights into both the attractions and self-justification of said pursuit, is a stand out moment. Similarly, Corsar’s retelling of his childhood sexual abuse at public school is a rare instance of lonely and poignant self-reflection, reminding us that pain, truly, has many faces.

With deft and skillful direction by Misplaced Theatre’s Jo Butler, ‘Decadence’ is one of those dramas that lingers in the mind for some time, rather like an overly rich meal. Go see.

Decadence runs at the Alma Tavern Theatre until Saturday 5th March 2022. For tickets and more information, visit their website.