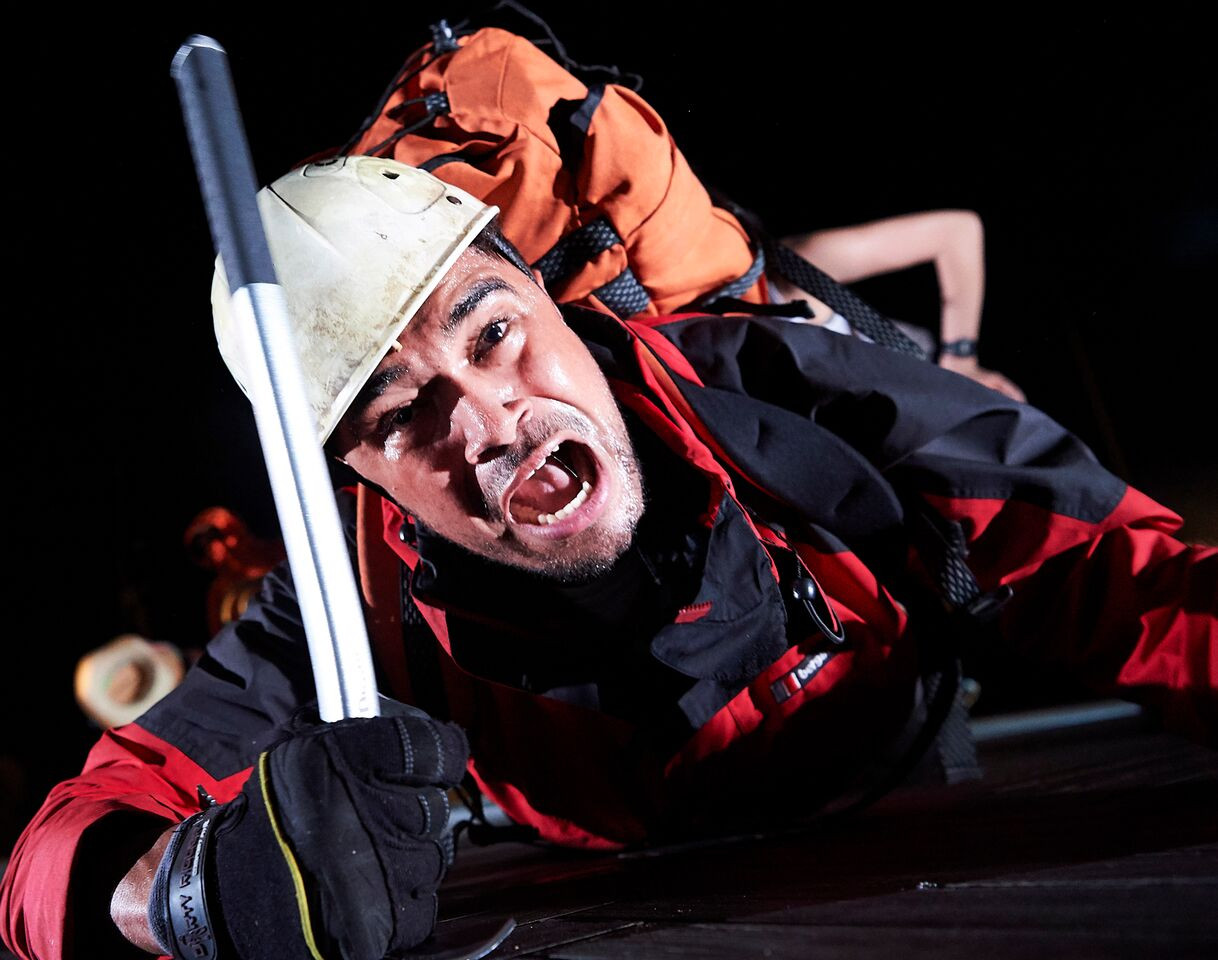 Those already familiar with mountaineer Joe Simpson’s 1988 memoir or Kevin MacDonald’s heart-stopping 2003 documentary, will most likely agree that Simpson’s incredible tale of survival in the face of the starkest adversity is one that nearly defies rationale. Though obviously in a separate universe of human achievement, Bristol Old Vic’s adaption of ‘Touching the Void’ is no mean feat in itself; it brilliantly and powerfully rises to the difficult challenge of adapting Simpson’s story to the stage.

In 1985, Simpson and his climbing partner Simon Yates successfully scaled the previously unconquered West Face of Siula Grande in the Peruvian Andes before a disastrous fall resulted in Simpson breaking his leg and Yates being forced to abandon him when certain death loomed for both men. Horrifically injured, hungry, thirsty, frost-bitten and fevered with hallucination, a crazed and unrecognisable Simpson emerged alive at the foot of Siula Grande three days later.

While drawing on the material facts of Simpson’s book, it’s this hallucinatory and deranged aspect of his tortuous descent which allows for writer David Greig and director Tom Morris to explore the terrain of Simpson’s ravaged mind, add touches of phantasmagoria and imbue the play with a sense of originality separate from its source material.

The opening scene takes us to Joe’s funeral in a Scottish pub, though a few surrealist hints in the dialogue give the impression that all is not as it seems. Joe (Josh Williams) has sister Sarah (Fiona Hampton) – who oscillates between reassuring and tormenting – for his illusory companion as he makes his excruciating journey back to basecamp; akin to the volleyball Wilson in 2000 film Castaway, her role is a necessary and effective device in progressing the narrative and drawing out Simpson’s innermost thoughts. Elsewhere, there are some dreamy musical interludes (nicely inspired by Simpson’s real life selections from Desert Island Discs) and – as featured in the book and film – his darkly comic torment at the hands of Boney M. 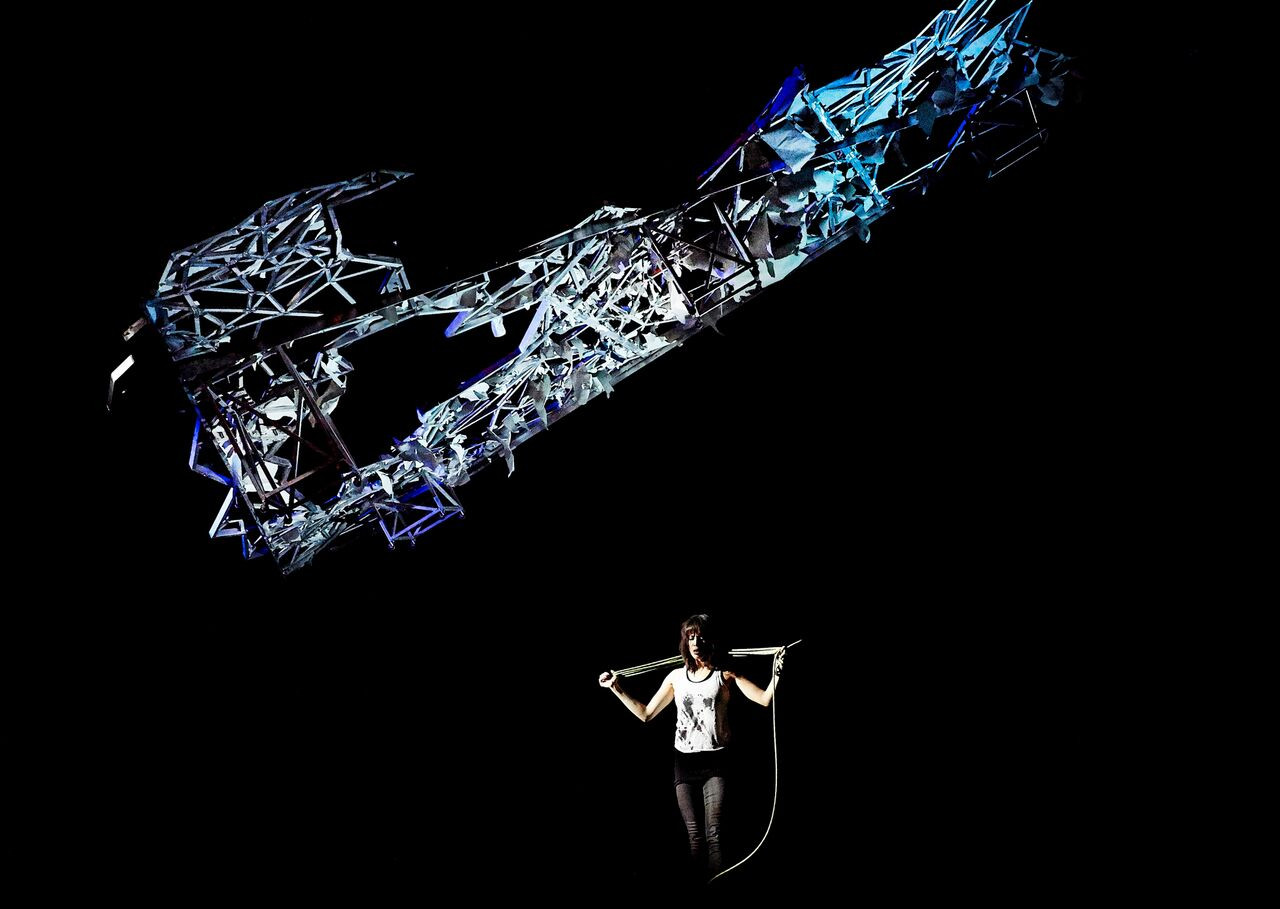 However, where the play reaches its zenith is in the final moments of the first half. It’s an ensemble collaboration between Ti Green’s set design, Chris Davey’s lighting and Jon Nicholls’ soundscapes that makes Joe and Simon’s climb and the subsequent catastrophe so riveting. A large, white zigzagging spider web structure brilliantly emerges amidst piercing blue light as the representation of the mountain face, an ever-present mist looms over the stage while the whistle of wind and a foreboding musical score conjure a Kafkaesque unease. It’s genuinely gripping stuff.

Williams’ portrayal of Joe Simpson comes into his own during the second half as the anguish of his struggle is captured convincingly with repeated screams and manifestations of suffering. Though Simpson’s eventual survival is effectively its own spoiler in light of his memoir, what makes the final act so compelling is one’s empathic reckoning with the magnitude of Simpson’s ordeal. Williams projects this admirably.

This adaption also attempts and often exceeds in finding the humour amidst the harrowing drama. In particular, gap year trekker Richard (Patrick McNamee) whom the two climbers bring along to assist at basecamp provides some laughs with a wholesome, childlike charm. Occasionally the humour misfires slightly and the omission of Simpson’s godless interpretation of “void” as he grew certain of his death  is slightly disappointing. However, the play throws up its own themes surrounding the word void and this a healthy sign of an adaption successfully striving to be its own brilliant retelling.