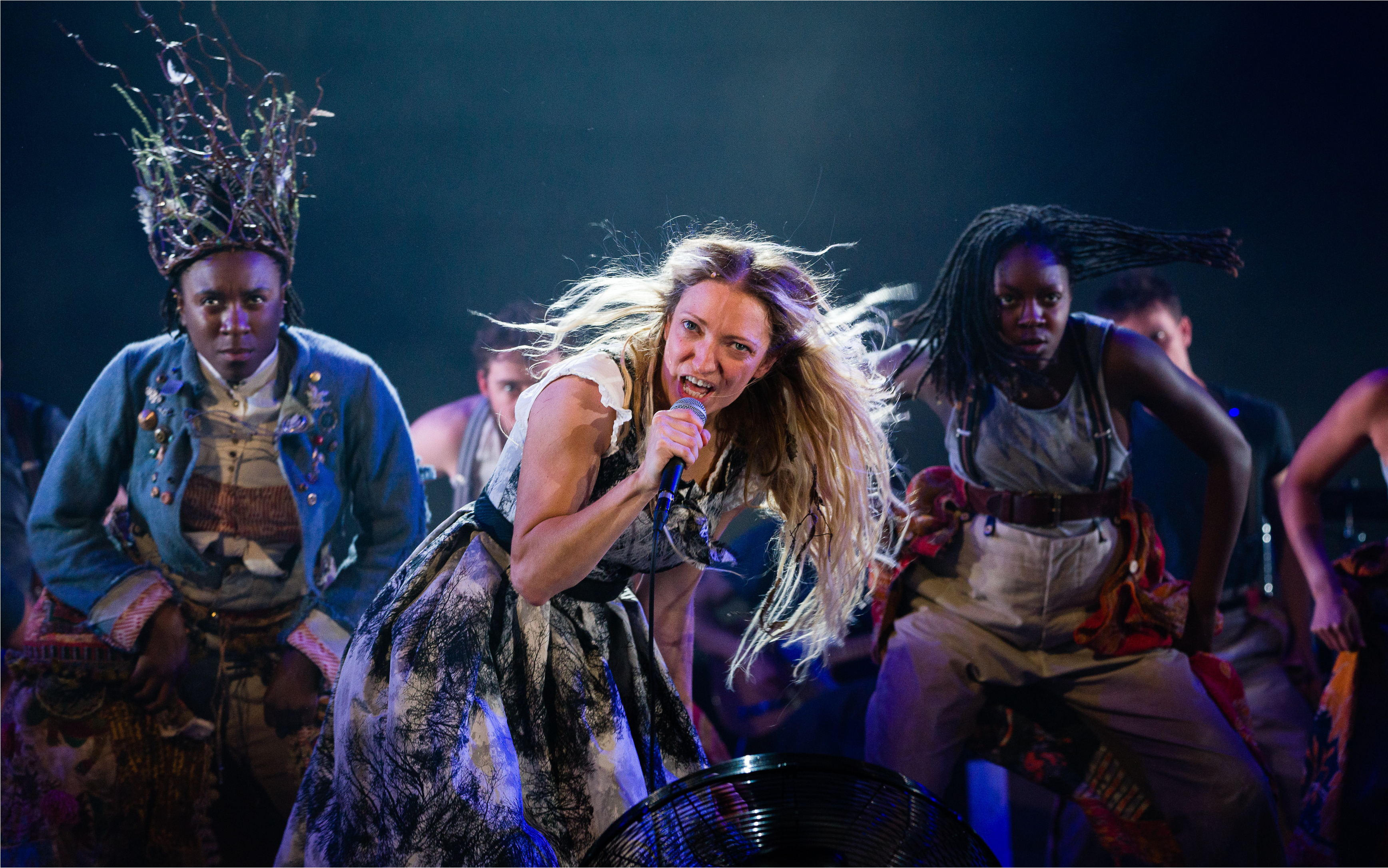 The work of Emma Rice, Artistic Director of Wise Children, has graced the Old Vic stage several times in recent years, and her excellent and idiosyncratic productions – featuring puppets, songs, a gender and race fluid approach to casting, and a reliable streak of originality – have imbued her with a much deserved, and still growing, reputation. Her interpretation of Emily Bronte’s novel of love, revenge, class and greed is no exception; this is a relentlessly entertaining piece, delivered with such brio that it easily masters a potentially onerous three hour running time.

The ingenuity of Rice’s presentation is clear from the moment Mr Lockwood, a new tenant at Thrushcross Grange, negotiates a windswept Yorkshire Moor and pays a visit to his landlord Heathcliff (Ash Hunter), who resides at the eponymous stately home. A large screen in the background depicts dark clouds and changing conditions, a live band provide a faultless and unremittingly moody sense of drama, a manoeuvrable set of doors brilliantly, and economically, denote the shifting between locations, and manipulated branches and sound effects nicely evoke the ferocity of the storm. 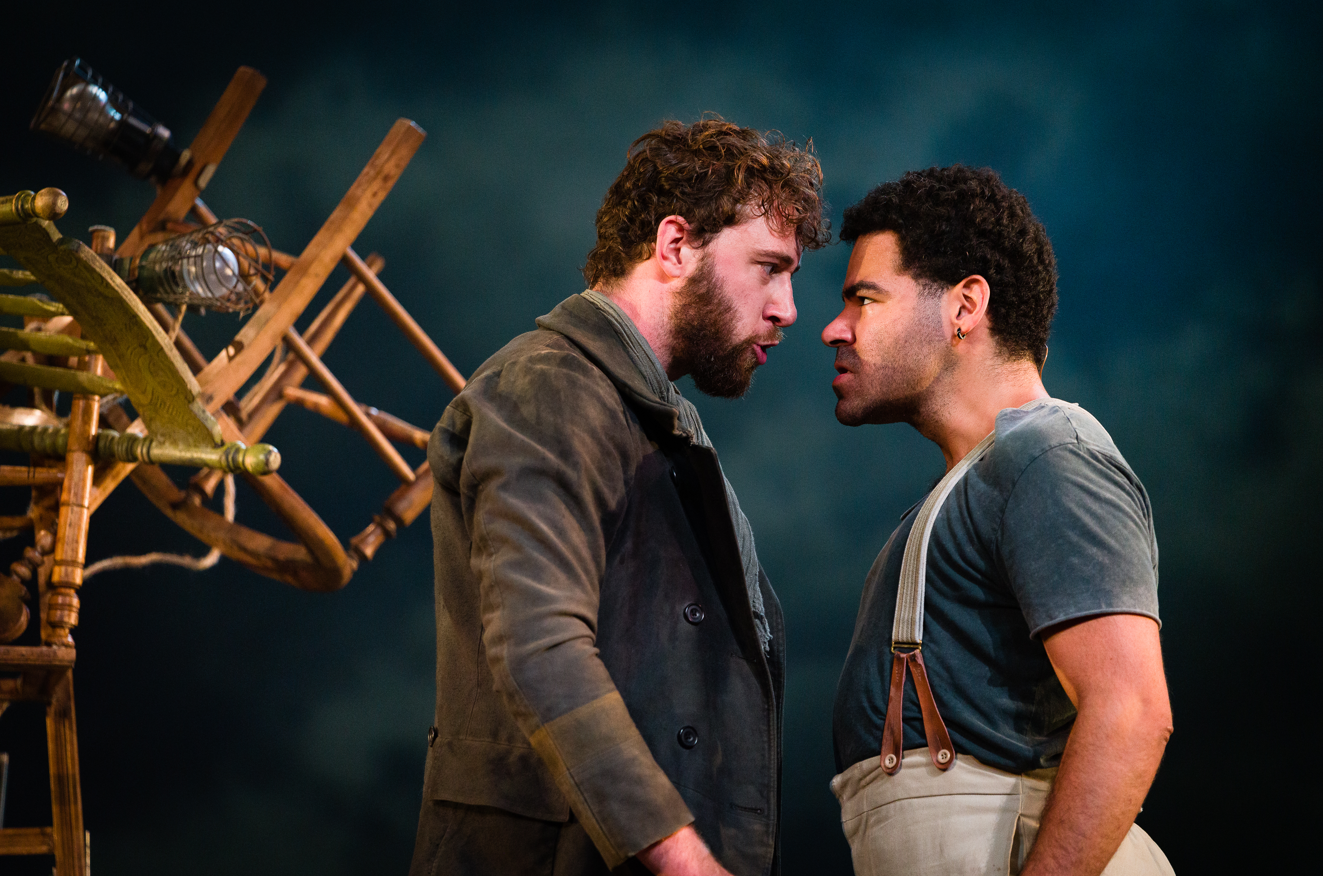 When Lockwood, given shelter from the storm for the evening, has a haunting, nocturnal visitation from a deranged Catherine (Lucy McCormick), the story rewinds to Heathcliff’s adoption – and eventual rejection – by the Earnshaw family, then residing at Wuthering Heights. His being cast into servitude by Hindley Earnshaw, his not quite consummated affections for his foster sister Catherine, and a love rival in the form of Edgar Linton – from neighbouring Thrushcross Grange – set in motion Heathcliff’s feverish, and often merciless, desire for both love and revenge.

Bronte’s novel has, in turn, been described as brutal tale of evil and abuse, and even “a compound of vulgar depravity and unnatural horrors” (though, admittedly, these were the relatively puritan words of a mid-19th century reviewer). Rice’s production, however, is a different beast in that it eschews too much focus on the darkness within its source material and instead broils with an energetic sense of fun; there are short song interludes that – like with Rice’s Romantics Anonymous – add an atmospheric weight without detracting from the narrative; there are quirky interludes of balletic dance – the camp movements of the excellent Sam Archer as Edgar deserve mention – and a smattering of comedy throughout is effective enough to be worth any risk that its inclusion feels uneven to the core narrative of fervent reprisal. The latter is best exemplified by Katy Owen’s stand out comedic turn as Little Linton; it’s essentially an effete man-child, Frank Spencer interpretation but it’s delivered with such élan as to draw consistent laughter.

Elsewhere, McCormick is fantastic as the increasingly unhinged and yearning Catherine. As well as a dynamic singing voice – the second act momentarily turns into a music gig as she belts out some Courtney Love style angsty rock – her manic, heavily kohl-eyed expressions convincingly depict her character’s descent into madness. Also, the live band are a performance highlight; Sid Goldsmith on guitar, Nadine Lane on drums and percussion and Renell Shaw on bass provide a soundtrack – one moment a subtle, simmering backdrop, the next a high-register production number – that never makes a false step.

It’s great to see a packed Old Vic once again and Rice’s talents are more than befitting the occasion.