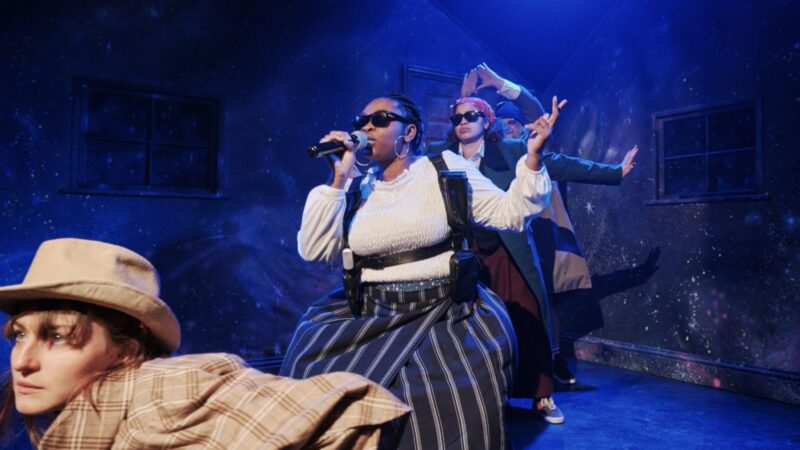 In preserving what is now a decade long tradition of marrying two disparate cultural works to delightfully comic effect, The Wardrobe Theatre’s end of year show has become a fixture for show-goers across the city. This year’s festive fusion arrives in the reliably remote paring of a 1868 Laura May Alcott novel with a sci-fi movie series starring Will Smith; thus Little Women in Black – using the March sister’s 19th century domesticity as a subtle backdrop to alien lifeforms and intergalactic invasion – offers ample fodder for the show’s usual absurdist anarchy.

Beginning with an introduction to the four March sisters in 1800s Massachusetts, one notices an initially slow pace at odds with the immediate, freewheeling joy of past Wardrobe Theatre shows such as Reservoir Mogs and Oedipuss in Boots. It isn’t until sister Jo (Tesni Kujore) – brought reluctantly to a ball at the behest of man-seeking sister Meg (Jessikah Wilson) – endures a strange and prophetic encounter with an unknown lifeform that the show starts to flex its comedic muscles. We learn that there are 15,000 aliens living among the humans in the local area. Also, Meg is a secret agent of the titular LWIB and, armed with ray guns and the memory erasing Neuralyzer, she must lead the fight to save our planet from impending doom.

There is much to be enjoyed in what follows; Wilson sings a satisfyingly filthy song – featuring a lewd allegory of being romanced like a near empty ketchup bottle – while sat amongst the audience; there’s a brilliantly silly moment featuring an ET mask and a computer keyboard; also, there are a few knowingly cheap prop gags – akin to those hilariously featured in sitcom Garth Marenghi’s Darkplace – such as a distant alien planet being brought to life by what looks like a multi-coloured go kart wheel and the shining of a torch.

As in previous years, the show’s funniest moments – reliably adding to the enjoyable sense of controlled disorder – come in the form of small mistakes and the apparently improvised reactions. Jenny Smith (the ensemble’s versatile lead in her dynamic, multi-accented portrayal of everything from an Irish teacher to a tinfoil hatted American) makes brilliant use of her dress upon spilling a cup of water. Later, the similarly excellent Tom Fletcher – who ultimately finds himself clad in a revealing outfit somewhere between dominatrix and 80s/90s wrestling trio Demolition – adeptly calls out an audience member he spots attempting to record his coup de gras song and dance routine.

Elsewhere, there are some brief moments that provide a sense of the cultural moment. Male white privilege is – including in Fletcher’s faux-lachrymose ‘White Man in Crisis’ song – alluded to not twice but thrice. The name of the imperialist planet deigned to destroy Earth – Planet Patriarchy – is another joust at the egos of affluent crackers everywhere, and there’s a nice gag about the confusion surrounding climate change.

It’s all a good laugh but there’s an unavoidable sense that the Wardrobe Theatre’s Christmas show has become a victim of its own past success. The ensemble have produced more dynamic and entertaining shows than this one but it’s surely impossible to continually Frosbury flop over the highest of bars on an annual basis. One should judge it on its individual merits; it’s still a worthwhile and fun way to spend a winter’s evening.