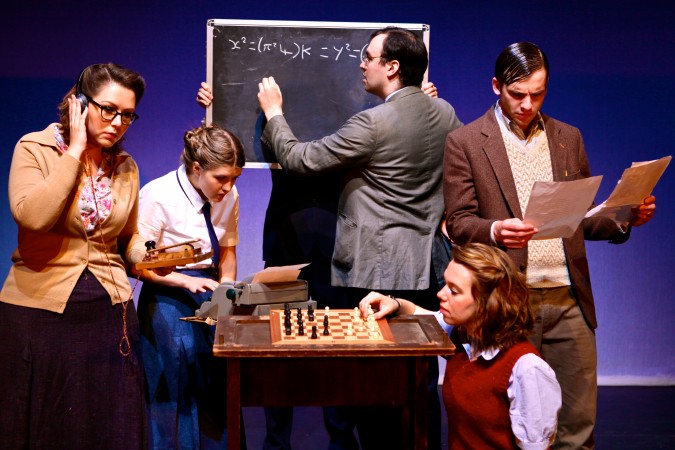 While millions of young men left the country to lay their lives on the line during the six year horror of World War Two, a team of gifted individuals remained safely holed up in an eccentric mansion house in Buckinghamshire to deliver their imperative, and oft forgotten, contribution to the war effort. Produced by Idle Motion Theatre Company, ‘That Is All You Need To Know’ brilliantly tells the story of the enigma code cracking team who resided at Bletchley Park on a “constant silent watch” as they faced the challenge of intercepting and deciphering up to 10,000 German communications per day.

With deft writing, adroitly economic set design and imaginative and innovative use of multi-media, ‘That Is All You Need To Know’ achieves both a visual allure, emotional engagement and storytelling élan that serves as a worthy and persistently entertaining tribute to these unsung heroes of the Second World War. With the play’s six actors doubling up their roles, we are alternately transported from the early 1990s effort to save the decaying mansion of Bletchley Park, to the 1970s musings of Gordon Welchman, who is on the precipice of finally breaking the silence surrounding his work by releasing a book, and the unremitting war-period efforts undertaken by the “melting pot of brilliance” consisting of chess champions, Oxford graduates and crossword experts.

Using visually projected indications of the varying time periods on to pieces of paper, suitcases and filing cabinets, the play alternates between the different eras with a stylish cohesion. Within the play’s opening moments we are taken from Welshman’s 1974 plans to finally unveil the government imposed secrecy surrounding Bletchley, to a 1991 break in by a couple who grow interested in saving the historical mansion, to the outbreak of war with Nazi Germany. This latter scene is the first instance where Idle Motion’s flair for imaginative presentation is revealed; we hear audio of Neville Chamberlain’s declaration of war, authentic crowd scenes are projected on to the white handkerchiefs of the female cast members and, to a backdrop of air-raid sirens, puppets are used to evoke the mass evacuation of children from their families.

Ably combining humour, an educational slant and touching moments of human drama, ‘That Is All You Need To Know’ is a richly fascinating 85 minutes of theatre. A crossed, four way telephone conversation between the characters in 1991 serves as a humorous interlude that reveals a dextrous and flexible approach to storytelling; the script is also peppered with funny lines that serve not to diminish but actually enhance the serious contexts in which the characters often find themselves. 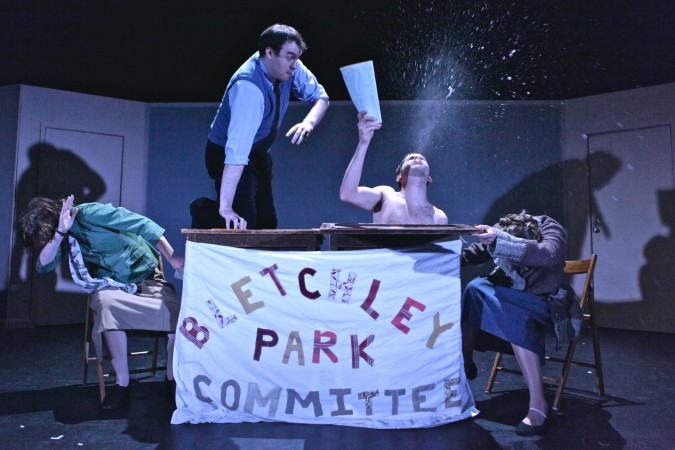 There is much to be learned here also; we learn, for instance, that Polish efforts to break the enigma code from as early as 1932 led to the British being handed ten years of research in one day, while probably not too many people are aware of the substantial role played by women at Bletchley Park; with eighty percent of the 8,000 people who worked there being female, this was a radically early strike for gender equality.

‘That Is All You Need To Know’ is a genuinely captivating piece of theatre that is set apart by its attractive and ingenious presentation. We hear authentic audio testimony from Bletchley Park veterans to break up the on stage drama, video projections effectively simulate everything from code written on a blackboard to the monitoring of Britain’s war progress and soft music ably evokes the anticipatory drama and high stakes of conflict.

Ending on a downbeat note, the performance concludes with Welchman delivering the tragic post-war story of Alan Turing; persecuted for his homosexuality and subjected to chemical castration, Turing later committed suicide at the age of 41. Welchman himself was betrayed by the government; the NSA and GCHQ deemed him a security risk and crushed his attempts to tell his story.

While there are perhaps echoes of this lack of acknowledgement in the continuing failed awareness of the brilliance of Turing, Welchman and their colleagues at Bletchley Park, such writing and performance is a fitting tribute to the fact that, away from the mortar shells and trenches of war, there were others to whom we owe a huge debt of gratitude.