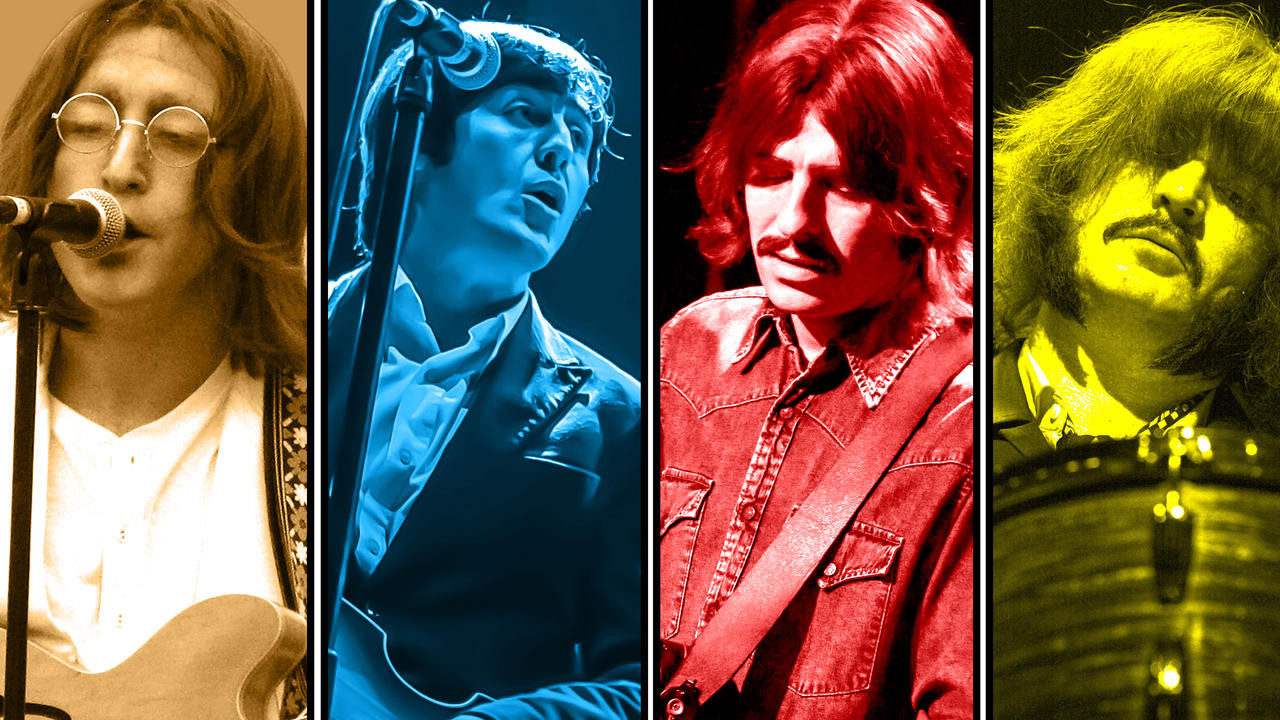 After slow beginnings in the 1980s, it was after a popularity boom in the 90s – courtesy of support slots for Oasis at the height of their powers at both Earls Court and the Britpop equinox of Knebworth in ’96 – that The Bootleg Beatles became the premier tribute band of the most celebrated act in musical history. Now an enduring and much enjoyed live fixture – albeit with several personnel changes along the way – the faux Fab Four returned to Colston Hall for what has now become a customary pre-Christmas celebration of The Beatles’ legacy.

There are four set pieces, each separated by a televisual montage of the 1960s: the early mop-top years of black suits and Cuban heels, the colourful adornments of Sgt Pepper, the far out hippy garb of Magical Mystery Tour and the more casual, individual get up of the group’s latter years.

Authenticity is the name of the game of course; the band’s raison d’etre being that of stark imitation and painstaking attention to the details: Adam Hastings (a striking carbon copy of John Lennon) wields a black Rickenbacker with Lennon’s bow-legged stance and characteristic palm slaps of the guitar strings during ‘I Want To Hold Your Hand.’ Steve White (as Paul McCartney) introduces ‘She Loves You’ in echoes of McCartney’s palpably nervous patter at 1963’s Royal Variety Performance and nicely executes the larynx shredding wail before the solo to ‘Can’t Buy Me Love.’

Musically, of course, the audience know what they’re getting as the band’s four talented musicians fire adroitly through thirty of The Beatles’ formidable canon of songs. Contrary to their inception as studio creations, it’s perhaps the songs during the two middle set pieces of the Sgt Pepper and Magical Mystery Tour eras – with their regular use of extra musicians on brass, woodwind, strings and cowbell – that work best as a live performance.

The strings of ‘I Am The Walrus’ meander menacingly from the stage, the complexities of ‘Strawberry Fields Forever’ are nicely captured with the interplay of brass and strings, while David Mason’s iconic and soaring piccolo trumpet solo is brilliantly brought to life during ‘Penny Lane.’

It’s not quite faultless simulation however; the bombastic coda to ‘A Day in the Life’ is a slightly unsatisfying murmur rather than a forceful crescendo. Stephen Hill as George Harrison seems to fluff the solo to ‘I Feel Fine’ while a brief technical mishap sees his lead guitar lines go missing during the intro to ‘Sgt Pepper’s Lonely Hearts Club Band.’ For his part, Hill – taking centre stage for ‘Something’ and ‘While My Guitar Gently Weeps’ and nicely mimicking Harrison’s speaking voice – could be a tad underused.

While many a Beatles purist would argue that some less familiar songs (‘Taxman’, ‘Girl’, ’For No One’) would add a layer of cool, it’s the populist choices that are integral to the warm, family-friendly nature of these pre-Christmas shows; ‘Help!’ sees many at the front row take leave of their seats for a dance, ‘When I’m Sixty-Four’ is a charming singalong for the “slightly senior gentlemen” in the crowd and ‘All You Need is Love’ encourages the mass sight of standing audience members and swaying arms.

Further adding to the fun, wholesome atmosphere, we have a few dedications announced by the band (including 80th and 81st birthdays) and the sight of a 9 year old girl taking near permanent leave of her front row seat and dancing at the front of the stage. There are also a few of the usual jokes made with chronological foresight: “Who needs Eric Clapton?” one of the band comments in celebration of “George’s” execution of ‘While My Guitar Gently Weeps’ – “His wife!” then comes the riposte.

We knew what we were getting and that’s why we came – as ever, a fun and enjoyably accurate simulation of The Beatles much adored songs.