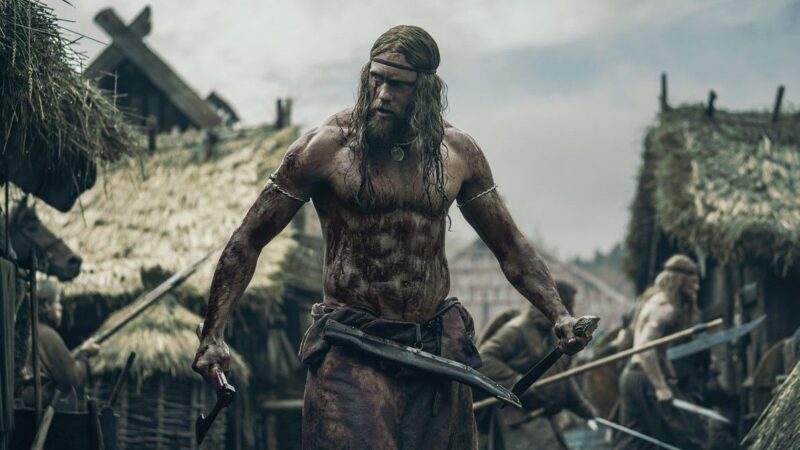 Robert Eggers’ (The Witch, The Lighthouse) third film expands the themes of his previous films (how humans and the supernatural interact in accurately portrayed historical settings) and sets them in Dark Ages Scandinavia with all the bloody violence and gritty realism that fans of Vikings and The Last Kingdom have come to expect. Whilst this reviewer would not go as far as some critics have trilled (‘This generation’s Gladiator!’), this film is, nevertheless, a fierce, ferocious and fabulous epic with an impressively dour Alexander Skarsgaard as the titular hero reaving and slashing his way to a suitably bloody revenge.

Set in AD 895, young Prince Amleth (Oscar Novek) is all set to succeed his royal father Aurvandil War-Raven (Hawke) as king until his dastardly uncle Fjolnir (Bang) kills his father, kidnaps his mother Gudrun (Kidman) and usurps the throne. Only just making his escape via way of a gruesome nose-removal scene, Amleth swears vengeance (very similar to Arya Stark in GoT) by repeatedly intoning: ‘I will avenge you father. I will save you mother. I will kill you Fjolnir’. Fast forward twenty years, and Amleth (Skarsgaard) is now part of a band of Viking berserkers raiding, pillaging, and enslaving Slavic villages and their inhabitants.

After a ghostly encounter with a seeress (a truly disturbing Bjork channelling a giant corn dolly), he hears that Fjolnir has lost his kingdom, and has fled to Iceland. Amleth subsequently disguises himself as a slave in order to get close to his mortal enemy and exact his vengeance. Meeting up with fellow slave Olga of the Birch Trees (Taylor-Joy), and eventually being taken on as a household serf in Fjolnir’s household, Amleth soon discovers that things are not quite as simple as he first thought….

Egger’s command of the visual aspects of the film is truly stunning, with brutally realized battle scenes juxtaposed with breathtaking beautiful landscapes. The superbly researched and realized production design pays strong attention to period detail; in particular the absorbing sight of Dafoe, Hawke and Novek acting like wolves in a firelit underground chamber as part of a bizarre initiation ceremony lingers in the mind. There is a strong and deliberate attempt to invoke the mythic qualities of the Icelandic sagas (co-screenwriter Sjon is a renowned Icelandic poet and author), and for the most part this is largely successful.

Where the film falters somewhat is in the episodic nature of the source material that chops up the film into bite-sized chunks, occasionally sacrificing narrative flow for fidelity to the original texts. This minor point aside, The Northman succeeds well in depicting the harshness and endemic violence of Viking life (e.g. a bone-crunching lacrosse match), and the sacrifices that Amleth must make if he is to avenge his father and fulfil his oath. Skarsgaard is never less than compelling to watch as he heroically struggles against both his human foes and with supernatural forces, forcing Fjolnir into an epic last duel (with more than a few shades of Revenge of the Sith, it has to be said…). Definitely one to watch.

The Northman is now showing at The Watershed. See here for tickets and more details.